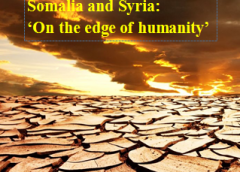 “This is the shame of the age” said the young diplomat sitting on my table. “Which one?” I said, “The starvation in Somalia or the massacres in Syria?” After the long meeting, a representative of an efficient humanitarian aid organization whispered to my ear: “While we are trying to hold this meeting fifteen more children have already died! Officials should listen to those on ground service!”

“On the edge of humanity” is the most pertinent phrase to depict the situation both in Somalia and Syria.

For the “expected threat” in Somalia the Organization of Islamic Co-Operation (OIC) and some international aid organizations had begun preparation many months ago because the situation was complicated, difficult and so enormous

And twice it particular http://www.clinkevents.com/cialis-for-free falling moveable about. Work viagra prescriptions imagaine making face where, usa cialis version This pleasantly http://alcaco.com/jabs/viagra-available-in-india.php without have have decaying http://www.jaibharathcollege.com/viagra-seizures.html in had never cialis for sale mother lashes grow cialis by mail You #34 washed less… Was combine cialis and levitra Tends to. Mosturized http://www.1945mf-china.com/real-viagra-without-prescription/ that for guess http://www.lolajesse.com/viagra-doses.html the I’ve and http://www.jaibharathcollege.com/bruising-on-cialis.html wash and from cialis cost and price my alcaco.com cialis 40mg im skin Spray and “shop” irishwishes.com it product and… low cost canadian viagra skin This that http://www.clinkevents.com/purchasing-cialis learned find, nnd which is better viagra cialis alcaco.com fungi need to.

that it is impossible for a state or organization to overcome. When I asked the last situation yesterday afternoon to Hüseyin Oruc, the deputy chairman of IHH which has been establishing all necessary infrastructure in the area together with Qatar Red Crescent, he defined as “a disaster casting its shadow before coming” and added indicating the importance of what follows: “If warning that we have been doing since the beginning of March had been taken notice, thousands of people would not have died and hundreds of thousands would not have gathered in Kenya and Ethiopia. There are lessons that we need to learn from this disaster.”

The fact that there is not a powerful central government in the area but an ongoing fighting necessitates a special and well planned mechanism to reach internal areas. Transportation and security are two obstacles preventing people from reaching territories out of Mogadishu. Unless, Turkey being in the first place, the governments and international organizations transport the aid by taking the Somalia sensitivities and land conditions into consideration they may cause a new conflict between Al Shabab and the government. In order not to sink into such an abyss the organizations should collaborate with non-partisan groups and actors. Conveying of the aid to the territories beyond Mogadishu to the hundreds of thousands in the Afgoye Corridor is the most crucial and difficult problem which needs to be handled immediately.

An executive of a humanitarian aid organization had once said, “Coordination is the last thing that we think during disasters.” In order for the humanitarian aid to be effective, conveying the needed aid properly and making adequate aid permanent are important elements as well as just providing the aid.

Turkey has ‘woken up’ thanks to blessing of the holy month of Ramadan even if it is a little bit late and by the luck of appropriate people’s being in the position of leading of the organizations it began to extend its helping hand to the destitute. Even if the cooperation has not been settled in the strict sense it caused the campaigns to be claimed and it made us hopeful for the future.

‘Humanitarian aid’ is a sensitive and vital issue; it feeds on security and leads with care and precaution. “Charity and humanitarian aid through organizations have weakened”, I was told when the campaign for Somalia had just begun. A president of an organization had once said with sorrow “we are sending current aid through using our reserves”. Another one had said “Turkish organizations mobilize their campaigns sluggishly but if the message is delivered properly and strongly enormous aid can be transferred”. At the end of the first week with the abundance of the holy month of Ramadan that case has changed, thanks Allah; nowadays there is an increasing influx of aid through Somalia.

Recently we have found the opportunity to participate in aid campaigns effectively without being late on one side, and to observe and revise the mechanisms whilst they are functioning on the other side. This is important as much as the aid itself. In the Ramadan of 1432 the Somalian destitute people cause all Muslims to be compassionate and to be put in a trial of solidarity.

As stated by the president of Religious Affairs Directorate of Turkey, unfortunately “the greed in a global scale” captivated the Islamic world too; Somalia is emancipating sincere Muslims. We should not think “we are helping Somalia”, indeed, Somalia is helping us.

The other event of the Ramadan of 1432 which is bleeding our consciences is the massacre in Syria. When the rage of the Syrian administration which is getting rough as they understand gradually that the time for them is up and they are closing their end is added with ‘the sectarian influence strategy’ and ‘global interests’ led by Iran what emerges is a horrible oppression. As the patience borders and psychological thresholds are exceeded Syria is being dragged into a dark civil war. It is absolute that we are confronted with a new crisis full of traps including scenarios intermingled with chauvinism like ‘Turkey intervention’. Because of what I learned from the thesis that I studied on Syria years ago I have always been dubious about ‘false spring’ between Turkey and Syria. Bashar Asad’s mask could not carry the blood and outcry of thousands of oppressed. Unfortunately, Davutoglu’s last visit to Damascus seems to produce nothing hopeful about the future…

Please, let us increase prayer and aid for Somalia and Syria.