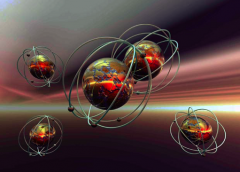 We will show them. But is it not enough concerning your Lord that He is, over all things, a Witness? [1]

Developing science and technology has facilitated the explanations of some verses and became an important tool in capturing the meaning that is meant in the verse. However, even though the science, which has become more known in the physical field, says new things in the end, it actually gives a more detailed explanation of the facts. While science shines light like an oil lamp, it often throws itself into the darkness. In this context, the Qur’an does not explicitly mention all sciences and its aim is to inform and promote the existence of a unique creator [2], to organize individual and social life, and especially the happiness of the Hereafter. If the Quran has mentioned about mostly scientific fields, it would become a set of books including a hundred and thousand pages, which is encircling too many volumes.

However, as it stands today, it confronts us with a fascinating narrative and eloquence that astonishes the human mind. Furthermore, Quran is like a garden which is full of variety, healing, delicious and unlimited fruits. And with its structure, it can appeal to every understanding. Everyone can benefit from the garden according to their degree and knowledge culture.

In this context, science is a tool that helps us to draw attention to the purpose that is meant to shed light on the Qur’an. Science, which is not able to reach the truth and giving the truth to the eyes on the head, has become an area that needs to be careful while studying on it. Science, which helps us directly or indirectly in understanding the Divine message and increasing faith in the hearts with this understanding, is not a field that is despised especially by us, as Muslims, but it is a field that should be used to get to know our Lord and His message. Science and Islam are not the work of two different sources.

Because, according to Quran and Muslims who have believed in the faith of tawhid, the universe and everything in it has been created by Allah, the Almighty [3]. The commentary of the created things have been done by the Prophet Muhammad (pbuh).

Science should be a tool that broaden our field of contemplation and increase our devotion to truth. However, it should not be forgotten that a science without the Qur’an will only increase ignorance, not science. Ignorance is to remain in the darkness. “One of the endless paths that lead to both darkness is to confront religion and science, or to declare one rival to the other”. [4] The main point here is not to confront two sides. Advancing in religion does not require staying away from science, and advancing in science should not require a cold attitude toward religion. The balance must be adjusted well to be mediocre, which should be the Muslim’s understanding of religion.

In this case, we have two options, “We will either take science and isolate our religion from a subjective and personal sphere, or we will honour our religion by making it the basis of our thoughts and lives, but we will continue to lack our weakness in science and the power it will provide”. [5] Regarding which way to prefer, let‘s listen Sayyid Hussein Nasr, then.  According to him, “The Qur’an and the Hadith constitute the source of knowledge wherever they are. And these two sources have always encouraged the atmosphere of scientific thinking, emphasizing the importance of searching for information.”[6]

“However, it cannot be said that there is a conflict of religion and science which can be said to be important in the history of Islamic thought. The attitude of the Qur’an, which is the source of Islamic faith, towards science has been extremely positive. Science and the Holy Qur’an are two eyes or two binoculars that look at the same point separately. They can merge into the final image, even if there are two other things”. [7]  Besides, the contribution of Muslims to the world of science with the enthusiasm of the Qur’an and the hadiths is quite high. According to a determination expressed by Ziyaüddün, “The Qur’an encouraged believers to explore nature, think and make scientific thinking a part of social life with 750 verses corresponding to 250 verses of morality. Defensive works that tried to give scientific legitimacy to the Qur’an began to be seen since the early 1960s.” [8]

Some of these verses and hadith which confirm this determination expressed by Ziyaüddin are as follows:

“Do they not look into the realm of the heavens and the earth and everything that Allah has created and [think] that perhaps their appointed time has come near? So in what statement hereafter will they believe?” [9]

“Have they not seen that We set upon the land, reducing it from its borders?” [11]

“Encouragement to seek knowledge, learn, and teach, and what has been related to the virtue of scholars and teacher”. [14]

As stated by Prof. Dr. W. Babarthold, “Islamic geographers gave more accurate and broader information than Greek geographers. They remained connected to Ptolemy in the field of geography and they surpassed the Greeks in with their deep knowledge”. [15] According to the same opinion expressed by Renan on the subject, “In the 15th and 16th centuries, before the emergence of Spain and the Portuguese in the maritime field, no nation has served as much as Muslims to develop human knowledge about the world. No nation has ever given as much depth to the earth as we live on. These are the conditions of every real progress.” [16]

And say, “[All] praise is [due] to Allah. He will show you His signs, and you will recognize them. And your Lord is not unaware of what you do.” [17]

“In the creation of the heavens and the earth, there are indeed evident proofs for the benevolent intellectuals, who come after each other day and night” [18]

In the light of all these verses, it should be stated that although the Qur’an is not a modern science book which aims to explain the laws of the universe, the main goal and purpose is to guide humanity. And as it is stated in many verses of the Qur’an without leaving this mission, it has made human beings to think about the wisdom of creation as well as revealing its miraculous aspect and has attracted attention to the original owner of the universe and the creation within this cosmos without drowning people’s minds.

As a matter of fact, if the real purpose were a modern science book, the Qur’an might lose its universality statue and probably could be hundreds and thousands of volume books.

The Qur’an has also preferred to leave the understanding of scientific facts to the progress of humanity and their own effort. In a period, called mankind’s period of ignorance, it was impossible to explain these Qur’anic truths, which could only be explained by modern science, even by the most brilliant people of the century and even the philosophers of science. As a matter of fact, the Qur’an has not only pointed to the field of astronomy, but has challenged the scientists of all time in many fields such as geography, history, literature, mathematics, physics, chemistry and biology. 1400 years ago, the Qur’an clearly defied with the following verse;

“And if you are in doubt about what We have sent down upon Our Servant [Muhammad], then produce a surah the like thereof and call upon your witnesses other than Allah, if you should be truthful. But if you do not – and you will never be able to – then fear the Fire, whose fuel is men and stones, prepared for the disbelievers.” [19]

This is still a challenge that remains unrequited. It has been seen and proved many times that the Qur’an has always proceeded in parallel with the scientific verses revealed. Although there are those who claim that there are overlapping points in the Qur’an and science, but the time itself has declared the Qur’anical truth. The main conclusion is that if science is ruled from the perspective of the Qur’an, it can advance much faster and get rid of the marshes in which it is stuck. It will be enough to answer the unanswered questions with the Qur’anic science which teaches to look from a divine perspective. However, as long as science avoids approaching the universe from a divine perspective, it pushes humanity into a materialist understanding of philosophy and pushes it into a deep paradoxical system.

[3] That is Allah, your Lord the Creator of everything, None is to be worshipped save He. So whither, are you straying away? Surah Ghafir, 62

[7] Bozkurt Mehmet,  Science and the Human and the Universe According to the Qur’an, 2012 / Ankara