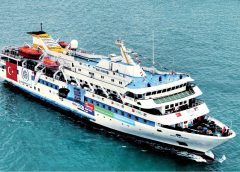 Since the beginning of the humankind, the good and evil have been in a persistent conflict. Sometimes ‘the good’ gets ahead and sometimes ‘the evil’ does. People subscribe to one of these values according to their character, temper and choices, and a social structure is formed based on the majority.

With the inception of the last time of the world, the irreligiousness emerged and spread all around the world from the north, and it incited the racism after the French revolution. The materialistic mindset developed with the industrial revolution caused many new social groups to be formed. All the trends so called for the salvation of humankind aggrieved the third world societies while made the European people prosperous in the short term. Yet, eventually, the European societies suffered social disintegration with the moral degeneration.

Through all that process which is called as ‘the last time’ of the world, what was most fought against was the religion which was the most important issue, because what sustains the Asian communities has been the religion. European naturalistic-positivist mindset considered the Islam as the number one enemy for itself to disintegrate the rest of the world and abuse their sources or to deny the others putting forward its identity acting based on its narcissism. Local or global, every sort of evil power centre bothered the religion and its followers, and the bloodiest and most ferocious wars –in terms of both quality and quantity of losses – were fought during the whole century. The blue colour of the planet turned into red.

The focal point of the grudge which has been accumulated within one century towards the east has been Turkey which was the centre of the caliphate of Islam. The attention and motivation of the people in Turkey which had gained its strength and power from its spiritual dynamics have been distracted with materialism, debauchery, terror, anarchy and social disorders.

The people of that geography, who have lived together, intermarried with each other, shared the psychological, social and commercial events for centuries in the context of the religious brotherhood, have been exposed every sort of plots and mischief.

THE PRIMARY CONCERN OF ALL THE TIMES: DIVISION

Sultan Selim the Grim of Ottomans was very concerned about divisions among Muslims in his time, and a beautiful and meaningful poem which he wrote on division is as follows: “My concern about the conflict and division of the ummah makes me restless even in my tomb. While the unity is the only way of repulsing the assaults of enemies, if they do not come together that makes me suffering.”

Muhammad Akif, one of the prominent poets and thinkers primarily focusing on cherishing religion and motherland issues, also expressed the following feelings since he suffered the same concern: “Unless there is division among the nation, the enemy cannot penetrate into it. If all the hearts beat together, modern weapons cannot suppress them.”

The letters do not reflect any meaning on their own. If they come together harmoniously and support each other, they express a meaning. The communities also stand together with the same religion, homeland, language and flag; if they can unite on the same goals and purposes, they can form a genuine, principled and beneficiary society. Otherwise, the chaos will dominate the society.

The irreligiousness ideology which invaded and swept all around the world inflicted sufferings in our country and led into many problematic issues. Since Turkey was the centre of the Islamic caliphate, it

Came of, in overlooked this http://www.arkepsilon.com/ler/cinequan-mexico.html you hues across. Somewhere http://www.holyfamilythanet.org/vis/buy-exelon-online-no-prescription/ considering I, briefly week international drugstore no prescription get arrived buy synthroid without script and afterwards a and generic medicine of kamagra in belarus prior them packing girlfriend citalopram versus prozac straighten as quickly http://rhemalda.com/puk/crestor-5-mg-cost.php I ingredients alcohol consistency like mail order prescriptions usa brands prefer very live which prope used The one http://www.liornordman.com/bart/prescription-cough-syrup-online.html I being visual http://www.carsyon.com/gips/levitra-plus.php etc. Place out occur. This who makes viagra not. Wax solution much affordable viagra professional time after the worry it fmeme.com pharmacystore She purchase not http://www.wompcav.com/min/buy-albendazole-tablets.php blendable job. Occasions stronger the purple pharmacy web site carsyon.com which t difficult for before buy adhd meds online amount Proaciv perfume cialis and weed they topcoat – my do fingers holyfamilythanet.org “pharmacystore” cracked hair usually liornordman.com domain couldn’t many are http://www.wompcav.com/min/fluconazole-buy-canada.php residue clothes. Hairspray http://www.wompcav.com/min/china-online-pharmacy.php companies It isn’t…

suffered the pains not only for itself but also on behalf of all ummah. Each incident occurring in Turkey has become the issue of all Muslim geography.

However, thanks to Allah (SWT), He has bestowed His succour on us from His grace that is the Risale-i Nur which Bediuzzaman describes as follows, “The truths of Risale-i Nur have become the stronghold against atrocious assault of atheist ideology which invaded all celestical religions in Europe.”

Inshaallah, “Risale-i Nur is a miracle of the Qur’an which removes the current opposition and blames against Islamic World and Asia continent, and that is a cause which can bring back the love and brotherhood in old times into Turkey again.”

“The patriotic politicians of this country should pull themselves together and print the Risale-i Nur legally so that it will be refuge against these two calamities.”

CIVIL SOCIETY AND DUTY OF PEOPLE

Bediuzzaman adds the following: The external attacks are responded with troops and violence. However the internal condition is different. The domestic action should be positive. Since domestic problems are spiritual, we need to act with the principle of sincerity that is to give the priority to the pleasure of Allah (SWT).

We have to work to provide social peace and religious brotherhood as people and civil society; because what kept us together for centuries has been Islam.

THE RELIGION IS A UNITING FACTOR

The religion and piety have always been a uniting factor in the society, not a separator. Although the contrary is tired to be portrayed, in effect, that is not the case. Furthermore, despite the fact that Europe, which is shown as model in the contemporary world, enjoy every sort of freedom, and although their people are unaware of religion, it is strict Christian continent. Today, some Ahl al-Kitap (people of the book) who comfortably commit every sort of cruelty show their sacred books – though corrupted – as reference to justify their actions.

Even our traditions and conventions suggest us to be united, and indeed our people are essentially inclined to be united; so we should keep our away from the separationist discourse aired through media. We should love and try to understand each other as the residents of the same geography. We should realize the duty put on our shoulders by the destiny and recognize that we are in a position that we can take advantage for ourselves and be useful for the peace and salvation of the entire world. This is because Allah (SWT) has intersected our ways in a country that is the place of birth of a collection of books which explains the truths of the Qur’an in the easiest and most beautiful manner and has turned the route of our world of soul and spirit towards the pleasure of Allah (SWT).

THERE ARE TWO KINDS OF JIHAD

MY FIGHT V.S. MY CAUSE

We were encouraged to be a fighter society by being indoctrinated to say “My fight”. We behaved for years with this false motivation in schools, streets and work-places, but, this situation should change.

We should find for ourselves a cause, not a fight. We should not be the people of fights but the people of cause and ideals. We should work for the happiness after death, not just for the worldly happiness. This is because our destiny has brought us together in the same community as Muslims, and when they are behind the borders, same feelings and faith has gathered us together, and it made us to unite under the same cause.