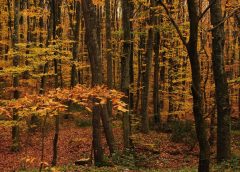 In some verses of the Qur’an we see that Allah Subhanahuwata’ala uses the pronoun “we” instead of “I”. This raises a question in minds: There is only one god, so what does this “we” mean?

• First of all, with the affirmation and witness of the whole universe, from the smallest atoms to the largest stars; there is no doubt in the fact that “Allah (swt) is the only one God.”

• In the Quran, the usage of the plural noun referring to Allah is only seen for “the first person.” Yet, whenever the second and the third personal pronouns are mentioned referring to Allah (swt), always the singular person is used in the verses such as “you, He, Him, His… etc.”

“How can you disbelieve in Allah? Seeing that you were dead and He gave you life. Then He will give you death, then again will bring you to life (on the Day of Resurrection) and then unto Him you will return.” (Baqara, 2:28)

• However, the usage of both plural and singular pronouns referring to Allah (swt) are seen only in the first person such as “I, me, we, our”.

But the essential point to which we must pay attention is that “we” doesn’t come to mean plural in these verses. It is used as “royal we” for which many languages including Arabic, English, Hebrew and Persian provide the usage. “Royal we” is used for singular person displaying the meanings of royalty and grandness.

So, “we” used to refer Allah in the verses, doesn’t indicate the plural of the noun. Rather it displays the majesty, grandness, the endless power of Allah (swt) and sometimes anger and wrath for the sinners and criminals.
If we take attention to the verses, we’ll clearly see that the usage of “the royal we” is appropriate and necessary in accordance with the context of the surah.

In these verses, it is obvious that “We created” doesn’t mean that there are more than one Creator. Rather, it emphasizes the wrath of Allah for the disbelievers and His majesty and endless power to underline that He is the only Creator.
Besides, as seen in the following verses, singular pronoun is also used in the first person:
“ (My Beloved! O Muhammad!) If My servants ask of Me to you, there is no doubt that I am very close (to them). I answer the supplication of the suppliant when he prays to Me; therefore they should also comply (to My call) for My sake and believe in Me so that they may find the true path.” (Baqara, 2:186)

In this verse, Allah (swt) speaks about His servants and emphasizes His mercy for them by the usage of “I”.

• Another point is that Allah (swt) sometimes uses “means” for the revelation. The one who brings and transmits the revelation to the prophet is the angel Gabriel. But the only source of the verse is Allah (swt).

“(My beloved! O Muhammad!) Without a doubt We have sent down to you this Book with the truth so that you may judge between people in a way that which Allah has shown you.” (Nisaa, 4:105)

In this verse, “we” indicates the existence of a “means” in the revelation. But in the sentence “Allah has shown you.” the subject is single and displays that the source of the revelation is only Allah (swt), the unique creator of all.

A version of this article appeared on askaquestionto.us