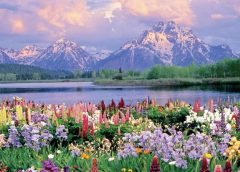 Imam Bediüzzaman Said Nursi explains that the belief in God’s oneness has two degrees: the first one is “a superficial belief” that God has no partners and that the universe belongs to Him. The second one is “a firm conviction” that God is one, that everything belongs to Him exclusively and that only He creates. The believers in this second degree are more protected against deviation and confusion. They acquire a deep understanding that everything belongs to the One God, Allah (swt), alone and only He creates. They are able to see manifestations of Allah’s attributes in the whole creation and are thus provided with the feeling of being in His presence always and everywhere.

Imam Said Nursi, however, teaches not only the goals to which we should aim as believers. He also teaches us the way of reaching this state through rational thinking and contemplation.
There are many examples given throughout Risale-i Nur that serve to this purpose. Each one is like a bag of cement that is there to strengthen this pillar of belief. Some of them will be mentioned here as a way of remembrance or short presentation depending on how familiarized the reader is with them. For a better explanation, one should turn to their original source.

The way every existing thing is connected to another in such an organized way makes this universe seem like a working factory in which it is not possible to take out a single piece of it without causing damage to the functioning of the rest. In this sense, Imam Nursi compares the universe to the human body (which he also calls a miniaturized version of the universe). If you harm a part of the human body, you will see the negative consequences in the functioning of the rest of it.

We can understand by that that the one who controls one element of the existence of something must have the control of all the other things to ensure the continuity and proper functioning of the first.

Bediüzzaman calls our attention in different parts of Risale-i Nur to this observed “cooperation” in the universe between its parts as a great manifestation of the attribute “Al-Fard” (The Single One) and a great evidence for the true monotheism (tawheed) and unity of God.

The one who is not able to know all living things, their individual actions and conditions, and is not able to know, see and create everything together is not able to intervene in the creation of a single thing, such is the observed balance in the universe, where every single observed species has also its provision coming to it without mistake or confusion with another while being interconnected.

This “management” and “administration” to all that is concerned with the hundreds of thousands of species is another example of the unity of God. If anything else were responsible for the creation of anything else, it would disrupt this balance created by the True Sustainer and destroy the organization set by Him.

We can also see that, despite the complexity of the constitution of the living things, their relations and connections and the provision divided among them, they are all under the same sun, breathing the same air, being rescued from drought by the same rain, living with the same water, constituted by the same atoms… They are all so different, yet they remain with so many similarities among them and they all point in the direction of the same Creator. The balance observed between these living things and the things that surround them and give them support to continue existing show that their Creator must have knowledge and power over everything and manipulate creation according to His wisdom.

Furthermore, Risale-i Nur in different parts reminds us that if we accept the Oneness of the Creator, the creation of the biggest celestial body and that of the smallest atom are the same, since there are no levels of difficulty for an unlimited power. But to attribute partners to Allah (swt) in the creation, makes even the creation of a single flower as complex as of an entire spring, such are the variants related to it.

There are many more examples and observations that attest to the unity of God in Risale-i Nur. But it’s important for us to not only purify our belief from shirk (associating partners with Allah) but to know how to pass through the bridge that allows our belief to manifest in our practical lives. In this regard, there are, two spheres of consequences: one in our individual lives and the other in our lives as a society.

If you imagine yourself as a soldier, you’ll see how hard your life would be if you had different commanders, each asking something from you and you having to obey them all at the same time. Not only that, it wouldn’t be hard to see their orders and commands contradicting each other at some point. But if you leave all the decisions to one true commander and try to obey only him, then it is obvious how much more at ease and in peace you would feel.

In the same way, the human being can choose to follow directions and orders from different sources (different gods, other people, society, his own desire…) if he thinks he depends on them to accomplish something in his life. He will try to base his life, actions, behaviours and morals on them in ways that more than often will contradict each other or contradict what has been revealed as a guide to him by the True Creator, Who in His Perfection can never contradict Himself.

Not only that, but how much more will that human, knowing that all his needs can be provided by turning to this one source alone, feel in peace? This human, that can have endless and countless needs, instead of having to turn to things in the number of his needs or more, can focus now in only one point, ask in one direction, expect the requests in his prayers to be answered in this life or the next by the same Being… No doubt he will find a lot of strength in his weakness by understanding that the Creator that brought him to the existence and life is the same Being that has created everything and has control over everything that exists or will exist, and He is the only one with the power and knowledge needed to fulfil his hopes and needs.

Similarly, society can expect a lot of problems and contradictions if it tries to base its organization on rules that come from sources that could never hope to have the global vision nor the necessary knowledge to attain the goal to which they set themselves.

For sure, the rules created in this society would either be contradictory in some situations or they would show themselves to be flawed to certain times or places.

But the most important point is that the rules that set, organize, sustain, maintain and provide for the creation must come from one source; and if it were possible to come from any other we would see the corruption and destruction of the balance to which we all can testify in our universe. So, the rules (or at least their basis) that concern the society must come from this one source which is the only Knowledgeable and Wise enough to set them in the first place.

If it were any different, we could never hope to see the balance, justice and organization we see in the rest of the creation manifested in our social lives.

One thought on “Creating one thing and everything”