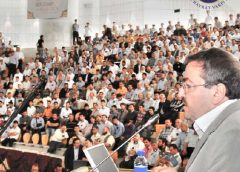 Our valuable guests and esteemed brothers and sisters who came from Malaysia, Cambodia, Egypt, Syria, Sudan, Yemen, UAE, Germany, France and USA and from the other cities of Turkey to the 3rd International Bediuzzaman Symposium which is organized by the Hayrat Foundation and who participate in this fine symposium in the hometown of Mawlana! You are welcome and we are honoured by your participation.

The Hayrat Foundation was founded in 1974 in Istanbul, Küçükçekmece by Ahmet Husrev Altınbaşak. He was the most prominent student and successor of Bediuzzaman Said Nursi who had one of the biggest impacts on iman and Quran in this very age.

The Hayrat Foundation was the axis of a golden chain the humanity had seen once in every hundred years. This chain has been growing since the blessed days of the Prophet for the world in darkness of tyranny and disbelief. And this last ring of that golden chain happened to be for this age’s horrible days of darkness.

For a new generation in the path of Quran and Sunnah, he worked his best for a brighter future not only in every corner of this beautiful country but also in lots of Muslim countries.

Keeping the idea of embracing the whole world, Ustad established a powerful background of the beauties and truths of iman. Afterwards, they made accomplishing the unity of the ummah as their and our primary goal.

For Ustad Bediuzzaman, one of the most devastating problems of today’s Muslim world is the education of belief. This was what all prophets were afraid of, and with whom again all prophets threatened their people. Still, this happens to be what we face today in the fitna of this age, being attacked from inside and outside, systematically and intentionally.

The imam, the leader, the teacher of our age questioned the problems we face today as follows:

“The world is undergoing a great spiritual crisis. An illness, a plague, a pestilence which emerged within western societies whose spiritual Dynamics have been shaken is getting spread to the earth. With what kind of solution will Muslim society overcome this contagious illness? With the old, spoiled, refuted, void formulas of the west? Or fresh and dynamic faith Essentials of Islamic society”

Inshaallah, in this symposium, we will study, debate and learn the solutions he proposed for the humanity on the issue of iman on the 50th anniversary of Ustad Bediuzzaman’s death.

The individuals cannot stand on the overall attacks and appealing games of the infidel world. They symbolize an aspect from the days of Jahiliyyah, but much more attacking of the fundamentals of iman and throwing away, beating down the individual.

Ustad, the honoured, devoted his life on training a generation which supports each other for one same goal, understands the cause of their existence, struggling for each other’s future. A generation full of unselfishness fully equipped high quality and all the time ready!

He accomplished a view, a way of life that made any house to a madrasah in any condition, any situation. He never weakened this view even in his exile, in prisons in his suffering life away from the benefits of this world without a word of complaining.

The “international” forces in the first days of 20th century disrupted the Muslim world both spiritually and secularly by attacking the Ottoman Empire. As we witness, it happens today in Iraq and some other Muslim countries.

The Muslim armies defeated the Greek and were happy with this in a messy mind. The enemies wanted to use this time to poison the generation with disbelief and demolishing every virtue, mixing the good with bad using the help of their social workers and engineers. Ustad Bediuzzaman gave his whole life on spreading education of iman after realizing this dreadful plan.

He taught the students to listen and learn from the lessons instead of the teachers from whom they were complaining about. As he was telling them in his books, the Risale-i Nur collection that every science and art talks and shows the Creator, Allah (SWT).

That is the point of view he establishes in his works. How to read this book of universe, how to learn and benefit from each and everything that was created, and event that happened, sight that we see. A point would take us to the worlds of wisdom and knowledge.

This is such an approach that it responds to the orders of the Qur’an such as “do you not see?”, “do you not understand?” with service and worship based on reflection.

It leads us to a point, a conclusion which indicates the stamp of oneness of Allah on everything. It is like the staff of Moses (peace be upon him) gushing water wherever it strikes rather than water which was brought labouredly.

Bediuzzaman does not ground belief (iman) education on current imitative assumptions but on new bases which are based on not only mind but also conviction principle satisfying heart and soul.

He proves tenets of belief (iman) with an expression at the degree of vision of certainty which satisfies minds and hearts so convincingly and obviously that those who benefit from the Risale-i Nur make progress at the peak of iman.

The basic reason of the problems of the Islamic world in our age is the weakness of iman consisting of imitation and lacking verified knowledge, isn’t it?

Helping someone to understand and embrace Islam is much more important than advancing ten people’s degree to being saints.

It is time to save iman. The most crucial duty is to protect iman from any suspicion and blasphemy. Good deeds are only possible with a sound and verified iman.

A good deed is possible only by a stable faith.

The Hayrat foundation carries activities under the spiritual leadership of Husrev Efendi who was presented ‘in his place’ and called by Ustad Bediuzzaman as redeemer and sincere devoted hero of Turkish people straightforwardly in the direction of the service by not taking the side of innovations in Islam. It never abuses its power and energy for material or spiritual interests and worldly movement, politics.

In this context, we are going to listen to the speeches and presentations about the tenets of iman and Bediuzzaman’s explanations about those subjects prepared by the distinguished participants.

We would like to thank the discoursers, guests and our friends who contribute to the symposium coming from all over turkey and abroad.

As the Hayrat foundation, welcome to our symposium again.

May Allah help us to benefit from this symposium and help all our brothers who are in difficulties and pain all over the world. Ahlan wa sahlan