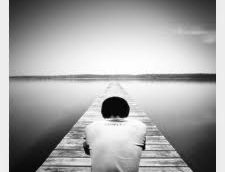 This world and hereafter are two separate universes but there is such a close relationship between them. The border of these two universes is like a very transparent curtain and passing through to the other side is as easy and quick as opening a curtain.

In addition to this, there is also a long distance; there are long ways and quite different universes between the world and hereafter. It’s possible to pass through hereafter by traversing these ranges.

Although these two situations are considered to contrast each other, there are many narrations that describe both the first and the second alternatives.

Just as this universe, the world which we observe consists of not only the parts that we can see but also many universes, so too hereafter universes consist of many universes. A human comes to the world from ghayb (the unseen) by the will of Allah (SWT). To pass through hereafter necessitates ‘‘death’’ and al-Barzakh is the first step and door of the hereafter universes. Then humankind travels through the ranges starting with al-Barzakh. Then they go on to the Day of Judgement, from the Day of Judgement to Mizan (Balance of Action), from  Mizan to Sirat (The Straight Bridge), from Sirat to hell or heaven.

In order to comprehend the relationship between the world and hereafter and understand these two universes which are perceived differently, we must find out the answers to some vital questions.

Why does hereafter exist and what can prove its existence?

The proof of hereafter’s existence is the contrasts in the universe; like yesterday-tomorrow, summer-winter, past-future.  The Almighty Allah (SWT), who creates past, also creates future as He (SWT) could create yesterday and bring the next day to us.

The rest of the contrast in the universe is the proof of hereafter as well. Humankind wishes they would take pleasure without any trouble, would live forever and would always be with friends. However, the world is not a suitable universe for these desires. The contrasts make us desire a life which has no contrasts, all evil actions go to hell and all goodness and beauties go to paradise.

Actions and works in the world are the proof of hereafter too. Mostly, a tyrant retires from the world without being punished properly. The oppressed emigrate to hereafter without getting their due. Certainly, there is a Supreme Court of the Almighty, where everybody will be judged. Otherwise, tyrants would remain in glory and the oppressed would remain in contempt while emigrating to hereafter. If it were just like this, it would be an injustice and wicked situation for humanity.

How can a disposition of baby in its mother’s womb be evidence for hereafter?

A baby in its mother’s womb can be an example for hereafter as follows: A baby in its mother’s womb has organs which are not used or not used properly by him. That baby cannot eat with its mouth, breath with its lungs, hold something with its hands, walk with its feet, see with its eyes or use its mind etc. All the organs of that baby are the signs of a world life where the baby will use those organs one day where he is supposed to go.

This situation proves the existence of world life. Like in this example, although people desire to do many things in this world, most of them cannot fulfil their aims. They cannot use most of their organs at maximum capacity. According to the scientific method’s optimistic results, humankind can use only 10 percent of his brain at most. Most of both the five senses and spiritual emotions cannot be satisfied fully in this world. Everybody has a strong feeling to live forever but this world is not suitable for this wish. A human being needs such a universe where he can use both his physical and spiritual senses and we call this universe as ‘‘hereafter’’. If you were to ask a baby in mother womb whether it wants to leave there or not, the baby would prefer to stay there. No matter how much you try to describe the world, the baby cannot understand. Neither do we understand the hereafter universe and most of us do not want to go there just like a baby in mother womb.

How can the arts of Mercy, which Allah (SWT) creates in spring, be evidence for hereafter?

When we observe the arts of Mercy, which Allah (SWT) creates in spring, we can come to the conclusion that Allah (SWT) recreates living creatures that died in winter. Allah (SWT) recreates more than four hundred thousand creatures without mixing with each other in a few weeks and in the same form that He (SWT) did in the previous year. It is certain that there is a morning after night and there is a spring after winter. In this way, there is no doubt that there will be a morning of the resurrection and hereafter after the winter of doomsday. Just as Allah (SWT) can recreate the living creatures that died in the previous year, so Allah (SWT) certainly can recreate us too.

A bone particle that is called ‘Ajb al-Zanab, exists at the last part of the vertebral column and is about the same size as a fig seed is also evidence for hereafter. Although all parts of human body start to decay, that particle never decays. That particle can be said to be equivalent to the seed of the human body. Just as seeds of plants which die in winter come into leaf again and eggs of insects come to life in next spring under suitable circumstances, so too will the  seed of human beings start to come to leaf again in the Resurrection Day. In first creation, Allah (SWT) created without any seed, of course Allah (SWT) can recreate without any seed but He (SWT) wants us to conclude from that seed. Coming to life is possible for a plant or an animal when there is a seed or egg. In the same way, we will come to life through our seeds called ‘Ajb al-Zanab.

Death is the night of wedding. Death is the place where you meet the beloved. It is not nothingness; on the contrary it is the beginning of real life. It is not a separation but a meeting. It is not non-existence but existence. Death is the start of being immortal. It allows people to come together with 99 percent of their friends and relatives. Happy is the one who does not escape from death, does not forget the truth of death, looks at the grave bravely and makes essential arrangements for the life after death…

What do people who do not believe in hereafter gain and what do believers lose by believing in hereafter?

People who do not believe in hereafter will always be in distress both in this world and next. As we have already explained this issue above, there is no need to explain it here in details. People who believe in hereafter behave more patiently and less sad when one of their close friends or relatives passes away just because they know that they will meet again one day. On the other hand, death is non-existence from the perspective of people who do not believe in hereafter. When an unbeliever loses one of his relatives or friends, he becomes totally unhappy as he thinks that his friend does not exist anymore.

The owner of this Great Sovereignty has great Generosity and total Compassion. Allah (SWT) also has Great Glory, Dignity and Honour. Being Munificent necessitates bestowing. Compassion cannot be without bestowing. Glory necessitates effort. Dignity and Honour necessitates punishing violators. However, in this world, when we consider the compassion and honour, no complete punishment is seen. It is seen as if tyrant remains in glory and the oppressed remains in contempt while emigrating from here. Therefore, their judgement is postponed to a Supreme Court.