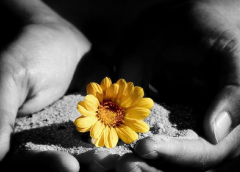 Lack of awareness of the Spiritual Bonds between Muslims, and the Problem of Group Fanaticism

Imam Bediuzzaman Said Nursi is a hero of Islam who spent his whole life working to strengthen the bonds between Muslims that bind them to one another.

The verse “وَٱعْتَصِمُوا۟ بِحَبْلِ ٱللَّهِ جَمِيعًۭا وَلَا تَفَرَّقُو” And hold fast all together to the rope of Allah and never be divided (Al Imran, 3:103) was reflected in his life. He wrote books to add power to the dynamics that unite and integrate Muslims, and he bequeathed the issue of Islamic unity to his students as a mission, an aim, and a duty. One of the most important reasons for Muslims being underdeveloped in this age is their disunity according to Imam Said Nursi, and one reason for this misery is that they do not know ‘the luminous bonds that bind the believers to one another’. Now I would like to share with you these luminous bonds between Muslims and how they unite us in the light of Imam Nursi’s ideas.

Imam Nursi said, “Love is the reason for this universe’s existence”. Since every element of the universe, which is like a giant human being, is bonded to every other with the bond of love and attachment, and seeing that the heart of man, who is the most precious fruit of the tree of the universe, is filled with the love of Allah and the love of the things that Allah loves, it is a must that the heart of man, who is like a micro universe, and especially the hearts of Muslims should be bonded to each other with faith and the love of Islam.

“We are the volunteers of love, we do not have time for enmity,” is a principle that Imam Nursi made the central focus of service. “The thing most worthy of love is love, and the quality most deserving of enmity is enmity,” he said. “That is, the quality of love and loving, which renders man’s social life secure and impels to happiness is the most worthy of love and being loved. Enmity and hostility are ugly and damaging qualities, which have overturned man’s social life and more than anything deserve loathing and enmity and to be shunned.” (Damascus Sermon)

Tawhid wants the Unity of Hearts

Iman binds the believer to the one and unique Sultan of the universe. It makes man a servant to the Sultan, and obedient to His commands. In the same way, that bond of iman must bind together the hearts of the believers who are the servants of the Sultan. Regarding this subject Imam Nursi said the following:

The bond of iman and Islam is so strong that it can bind the stars and the universe to each other with spiritual links. The reasons for disunity and enmity are so weak and simple. If someone is overcome by his soul and has enmity and hatred towards his Muslim brother, doesn’t he end up disrespecting and severing those ties? Doesn’t that mean destroying the thousands of reasons of love and the relations of brotherhood?

Hostility to a Mu’min (believer) is tyranny

Imam Said Nursi stated that hostility towards a believer is tyranny in the perspective of truth. He explained this unjust treatment with an example:

“O unjust man, nurturing ill-will and hostility against a believer! Let us suppose that you were on a ship, or in a house, with nine innocent people and one criminal. If someone were to try to make the ship sink, or to set the house on fire, because of that criminal, you know how great a sinner he would be. You would cry out to the heavens against his sinfulness. Even if there were one innocent man and nine criminals aboard the ship, it would be against all rules of justice to sink it.  So too, if there are in the person of a believer, who may be compared to a religious building, a Divine ship, not nine, but as many as twenty innocent attributes such as belief, Islam, and neighbourliness; and if you then nurture rancour and enmity against him on account of one criminal attribute that harms and displeases you, attempting or desiring the sinking of his being, the burning of his house, then you too will be a criminal guilty of a great atrocity.” (The 22nd Letter)

Imam Said Nursi explained how cruel and unwise it is to have hatred and hostility towards a brother in religion with an example:

“If you were to say that ordinary little pebbles were more valuable than the Ka’ba and greater than Mount Uhud, it would be a ridiculous statement. So too, belief which has the value of the Ka’ba, and Islam which has the splendour of Mount Uhud, as well as other Islamic attributes, demand love and concord; but if you prefer to belief and Islam certain shortcomings which arouse hostility, but in reality are like the little pebbles, you too will be engaging in great injustice, foolishness, and sin!”

Is it not the case that unity is a necessity for the Muslims, who have been bonded together with the tie of faith ever since the day of ‘Alastu bi rabbikum?  qalu bala’ (“Am I not your Lord? They said, ‘Indeed, you are’”) whose names are written in Lahw al-Mahfuz (The Sacred Table); whose centre, mihrab and minbar are in Mecca and Madina; whose leader is the Prophet Muhammad (PBUH) and whose Book is the Qur’an; who gather in mosques and madrasas and line up shoulder to shoulder, whose goal is only the pleasure of Allah (SWT)? Isn’t the unity and solidarity of the Muslims the characteristic of their iman and Islam?

The believers are like the members of a body

For instance, didn’t we all cry in Palestine, in Gaza, and in Mavi Marmara? Didn’t we all suffer from hunger and famine in Somalia? Didn’t we all get hurt by the disaster in Sumatra? The events in Caucasia, Balkans, Kashmir, and now Syria; aren’t they the bleeding wounds of all Muslims? And shouldn’t we look for a way to heal our wounds?

The Real Spirit of our Nationality is Islam

“If you need nationality, Islam is enough for you”, said Imam Said Nursi to the Muslims while giving his Damascus Sermon. And he explained more about the Islamic nationality:

“The foundation and spirit of our true nationhood is Islam. Through the bond of this sacred nationhood, all the people of Islam are like a single tribe. Like the members of a tribe, the groups of Islam are bound and connected to one another through Islamic brotherhood. They assist one another morally and, if necessary, materially.”

How can a Muslim break off this unity that we need desperately? What  ruthlessness and ignorance it is to sever the luminous ties that brought us together and will keep us together forever. How unreasonable it is to break this connection of unity of the entire ummah because of the partiality of politics, obstinate rivalry, or negative nationalism (racism).

Throughout Islamic history, the obstinacy and partiality arising from the fanaticism of particular paths (tariqahs, jamaahs, sects, groups etc) has terribly undermined the social life of Muslims. As a result of this, the disunity of believers has sometimes paved the way for the people of misguidance to triumph over the Muslims. To prevent this devastating consequence, Imam Said Nursi advised the followers of different paths (jamaahs, tariqahs and groups) to consider the following in order to build up their love and solidarity:

1- Serving the truth is like carrying and preserving a great and weighty treasure. Those who carry that treasure on their shoulders will be happy and grateful when the powerful hands of others rush to their aid.

2- Muslims must look for ways to unite within the fold of Islam, irrespective of particular outlooks, remembering those numerous ties of unity that evoke love, brotherhood and concord.

3- “Allah’s pleasure is won by sincerity alone”, and not by quantity of followers or great success. For quantity and success are a function of Allah’s will; they cannot be demanded, although they are sometimes given. Sometimes a single word will result in someone’s salvation and hence the pleasure of Allah. Quantity should not receive too much attention, because sometimes to guide one man to the truth may be as pleasing to Allah as guiding a thousand.

4- Sincerity and adherence to the truth require that one should desire the Muslims to benefit from anyone and at any place they can. To think, “They should take lessons from me so that I gain the reward” is a trick of the nafs and the ego.

5- There is not anything to compete for in the hereafter. So, there is no point in entering into rivalry for the good deeds regarding the hereafter; jealousy has no place there.

6- Those who serve the truth must act positively, that is, out of love for one’s own outlook, one should avoid enmity towards other outlooks, not criticize them, interfering in their thoughts and conduct, or in any way concerning oneself with them; because those who quarrel cannot act positively.

7- Every Muslim should adopt the principle of fairness that the follower of any true path has the right to say, “My path is true, or the best”, but not that “My path alone is true,” or “My way alone is good”, thus implying the falsity or dislike of all other outlooks.

8- While serving Islam, a Muslim must know that union with the people of truth like himself is a cause of Divine help from Allah, and a sign of the high dignity of our religion.

10- Those who serve Islam must abandon the self and egoism, and give up the mistaken concept of self-pride in order not to hurt the spirit of unity. They should always prefer fair-mindedness to selfishness, because the sake of the truth is lofty and there can be no substitute for it.

11- Expecting their reward from Allah alone, those who serve Islam must renounce the material and moral reward coming from people so that the sincerity is not lost.

12- In accordance with the principle of “al-hubbu fillah” (love for the sake of Allah), to be proud of the company of all those travelling the path of truth, to follow them and defer leadership to them; and to consider whoever is walking on Allah’s path to be probably better than oneself, thereby breaking the ego and regaining sincerity, these are the signs of sincerity. An ounce of deeds performed with sincerity is preferable to a ton performed without sincerity.

13- O people of belief! If you do not want to be enslaved in abasement, overlook each other’s faults; close your eyes to each other’s shortcomings! Regard it as your primary and religious duty to abandon internal dissension when attacked by an enemy from the outside, and to deliver the people of truth from their degradation and humiliation.