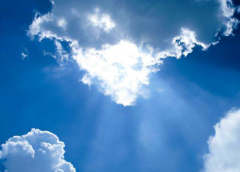 Questions which occur involuntarily do not damage a person’s faith or make the person sinful unless they are pursued with the purpose of denying God. Since such thoughts occur because of Satan’s whispers, they do not originally belong to man. By reminding him of such thoughts, Satan tries to trick man, wanting him to fall into a state of desperation about his faith and end up losing his faith completely.

“Some of the companions of the Messenger of Allah (PBUH) came to the Prophet (PBUH) and said to him:

‘We find in ourselves thoughts that are too terrible to speak of.’

He said, ‘Are you really suffering from that?’ They said, ‘Yes.’ He said, ‘that is a clear sign of faith (misgiving does not harm).’ (Muslim).

In the hadith, the companions ask the Prophet Muhammad (PBUH) about the Satan’s whispers that occur unintentionally and involuntarily. In some narrations of this hadith, it is stated that the misgivings mentioned in the hadith are about Allah (SWT). Actually, it is not appropriate or acceptable to speak and think about such misgivings about Allah, because they damage faith. However, the Prophet Muhammad (PBUH) states in the hadith that, as long as they come to mind unintentionally and involuntarily, they do not harm someone’s faith; the proof of their faith is that they feel suffering in the heart because of these thoughts.

Feelings that are out of will cause whispers

From time to time, we hear similar whispers which are caused by feelings that are out of will such as curiosity and fear. Since it is really difficult to control these feelings, they sometimes cause involuntary thoughts that our mind and heart do certainly not approve of. At this point, Satan interferes and tries to make man think that these thoughts have damaged his faith and that he has nearly lost his faith. People who are especially apprehensive and sensitive may fall into Satan’s trap, and although they still have faith in their heart, they think that they have lost it.

What should a Muslim do when he is face to face with such misgivings?

The thing we should do is to listen to the Prophet Muhammad’s (PBUH) recommendation and accept that the suffering in our heart is a proof of faith. Since we do not accept the misgiving with our heart and our mind, it is nothing more than a whisper of Satan, perhaps just a reflection of a whisper. Just as a snake’s reflection in the mirror cannot bite and the image of the fire does not burn; similarly the reflection of a whisper does not damage faith as long as it is not accepted by the  heart and mind.

Do not repeat the Satan’s whispers

Another point is that misgivings should not be overrated. Man should not consider himself to be in big danger and panic. This kind of panic may harm him a lot. The best thing to do is to stop thinking about it and end it, because overrating increases the whispers. Misgivings are similar to balloons. The more you blow, in other words, the more you give them importance, the more they expand. And the more you ignore them, the smaller they get.