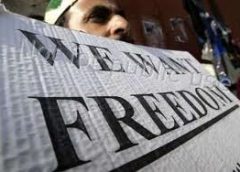 The monumental peaceful protests throughout Kashmir, bringing together hundreds of thousands of people from all racial and cultural backgrounds, began as a response to the impotent Indian Government’s attempt at confiscating 100 acres of Kashmiri territory for Indian settlements; the recent gruesome unearthing of 4600 mass graves – to which the European Union has passed a unanimous resolution; and desperate Indian dismissal of Kashmiri aspirations for self-determination. The powerful protests resulted in a magnificent revolt forcing Indians to meekly withdraw and rescind their erstwhile theft of Kashmiri land.

The rescinding of the land-grab by Indians resulted in the immoral and inhumane closure of the main highways into occupied Kashmir by the Indian authorities in collusion with Hindu fanatics – Bhartiya Janata Party & Rashtriya Sewak Sangh – in Jammu.  The result was crippling for Kashmiri civil society and coerced them to seek alternative trade routes to secure their basic necessities of life. Undeterred and forever vigilant, Kashmiri men, women and children, in exercise of their democratic right for peaceful congregation, gathered to march towards Chakoti, near the blood-stained and illegal Cease-fire Line. Hundreds of thousands peacefully and proudly strode towards Muzaffarabad, Azad Kashmir.  Without provocation, the Indian soldiers opened indiscriminate fire killing nine innocent Kashmiri civilians including senior Hurriyet leader Sheikh Abdul Aziz. The bloodshed continues.

The experience of nearly six decades has shown that it will not go away and that an effort is urgently required to resolve it on a durable basis.  ‘Durable’, in this context is synonymous with ‘equitable’.  It is imperative, whatever be the rights and wrongs in the equation as far as arguments go, real populations with a pronounced sense of identity of their own, with their suffering and their aspirations rather than just legal title and merit are involved.

The persistence of this problem has been a source of weakness for both India and Pakistan.  It has diminished both these neighboring countries.  This has been a fact in the last century and it is underlined by the unfolding environment of the twenty-first century.  America draws great satisfaction from India’s striking economic progress which will enable India to play its rightful role as a great power.  That kind of role can only be hobbled by a festering problem.  India’s adversaries — if there are none, whoever does not wish India to play the role of a major power in one context or another – will try their utmost to take advantage of it. A great power cannot afford disputed boundaries if it wishes to maintain or enhance its prestige and influence; a small or even a medium power can live with them indefinitely.

The ultimate aim of higher civilization is to free humans from fear and grief.  That, in essence, is what is occurring in Indian Occupied Kashmir.  A new generation has been raised with blood and tears for which death no longer poses a threat for what can death do that life has not done before: their suffering is freeing them from fear.  Kashmiri freedom from fear has led to the powerful protests we are all witnessing today and these are the largest demonstrations in recent years. The presence of more than a million people on August 22nd 2008 at Martyr’s cemetery is a proof that the freedom struggle is not a terroristic movement but a movement that is indigenous, spontaneous and popular.

We appeal to the United Nations Secretary General to intervene in the situation in Kashmir under the Article 91 of the United Nations Charter. Because human rights violations in Kashmir are systematic, deliberate and officially sanctioned.  Far from seeking to rectify the atrocious human rights record, India has legalized its state-sponsored terrorism in Kashmir.  It has given its occupation forces powers to shoot to kill and the license to abuse the people of Kashmir; in whatever ways they like in order to suppress the popular movement for basic human rights and human dignity.

We also appeal to the UN to maintain, indeed to intensify, her watch over the situation in Kashmir and not be lulled into the belief that the dialogue between India and Pakistan, in the form it appears to be contemplated at present, will soften the conflict or lessen the urgent need for mediatory initiatives.  The policy that aims at merely defusing the situation, whatever that may mean and not encouraging a credible settlement has not paid in the past.  It is likely to do even less now.

The people of Kashmir still continue to hope in the United Nations. They see it working, they see it enforcing Security Council resolutions, they see the United Nations taking leadership roles in various trouble spots of the world.  We firmly believe that the following measures are essential:

1.  There must be an immediate and complete cessation of military and paramilitary action by Indian forces against the people of Jammu & Kashmir;

2.  All bunkers, watch towers and barricades set up by the Indian military and paramilitary forces in towns and villages must be immediately dismantled;

3.  All those imprisoned in connection with resistance to the Indian occupation must be immediately and unconditionally released;

4.  The draconian laws must be repealed immediately;

5.  The right of peaceful association, assembly and demonstration must be restored to the people;

6.  India and Pakistan must set a stage for the final settlement of the Kashmir dispute by associating the genuine leadership of the people of Kashmir with the peace process.