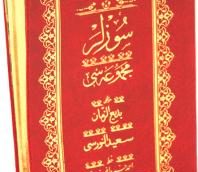 Ustad (1) Bediuzzaman Said Nursi wrote the collection of Risale-i Nur in order to put an end the negative influence of western civilization on Muslims ,to confute unbelievers,  to restore Muslims’ devotion to Koran and sunnah(2)and to revive religious life.

Risale-i Nur, having 130 pieces, consists of four main works especially Sözler (the words), Mektubat(the letters), Lem’alar(the flashes), Şua’lar(the rays). There are books consisting of 80-90 pages besides there are 2-3 paged books.

Narrated AbuHurayrah: The Prophet (peace be_upon_him) said: Allah will raise for this community at the end of every hundred years by the one who will renovate its religion for it.(Sunan Abu dawud)

When degeneration and deviation from sunnah and the Koran emerge with the appearance of sins, bid’at (7) and blasphemy, Tajdid (renovation), meaning restore, revive, means to struggle for these degenerations and deviations in order to bound degenerated and deviated thoughts and conducts of Islamic community to the Koran and sunnah.

Mujeddid, meaning renovator, means a scholar who is strictly loyal to the Koran and sunnah, master of Islamic sciences, who renovates the Islamic community by fighting against bid’at and blasphemy.

There have always been Mujeddids who have been fighting against sins, bid’at and blasphemy since the first century of Islam. They have always struggled for transforming the community to Asr-ı saadet (the era of happiness in the time of our prophet ‘pbuh’) and refreshed the spiritual atmosphere by removing bid’ats and reviving sunnah and the Koran.

Materialism which had been felt since 19th century became more widespread in 20th century in the Islamic world. People were lax in loyalty to Islam; suspicions about Islam began to emerge because of propagandas against Islam and the spread of western philosophy. Morality depraved. Even being a Muslim began to be something to be ashamed of. Faithless Generations having no reliance not totally but partly on Islam, even who were hostile to it came out.

Ustad Bediuzzaman is a figure who proved his merit of being mujeddid of this century with his successful struggle against sins, bid’ats and blasphemy.

There are six proofs which confirm his being mujeddid for us:

1. Belief services: Kalam scholars underscored the significance of the subjects on belief (iman) by stating that every Muslim is obliged to strengthen his belief; even if imitative belief

(Iman) is accurate; a Muslim who doesn’t render his belief to accurate faith becomes sinful.

Emphasizing on subject matters about belief is of great importance especially in our age when the atheism stems from natural sciences and spreads to the whole world. Risale-i nur put forward subject matters with irrefutable proofs while it strengthens the Muslims’ beliefs, confutes atheists’ claims. Lack of people who can defend subject matters on belief as good as Risale-i nur is the biggest proof of his being mujeddid.

2-IRSHAD (GUIDANCE IN THE RIGHT PATH OF ISLAM)

We live in a period that interests and worldly pleasures are mostly valued, hereafter is disregarded and even the Muslims are addicted to sins. Risale- i nur have guided a lot of people and prevented them from committing sins by proving that ill-gotten and illegitimate  pleasures have infernal anguishes  and leading Islamic life and facts of belief have heavenly pleasures  even in the world. Although there are a lot of people and groups performing ırshad

activities, Risale- i nur is more influential and large- scaled.

3- ATTACKS ON ISLAM AND RESPONSE TO THEM

There have been some issues oriented criticisms which were brought into agenda by the enemies of Islam since at the end of the19th century: cover of Muslim women, polygamy, and women’s share from heritage, our prophet’s (pbuh) wives, our prophet’s (pbuh) ascension to the heaven, the creation of evils are some of them. Ustad Bediuzzaman disapproved their claims the enemies of Islam and expounded these issues convincingly. He defended Islam in a best way.

4-Bediuzzaman took into account everybody from child to elder while compiling the Risale-i nur collection.

b)” Guide for the Youth” is for Youth

c)” Guide for the Ladies” is for women

d)” Treaty for the Old” is for the Elderly People

Ustad Bediuzzaman Said Nursi set forth Islamic judgments in a convincing and satisfactory way about a lot of issues and groups in the social life. These issues are tariqah (8), politics, Shiism, Wahabism (9), nationalism, materialism, positivism, capitalism, socialism, some bid’a groups… etc. He also wrote treaties to prove our prophet’s (pbuh) prophethood to the Christians and the Jews with rational and historical evidences as well as with proofs from the Bible and from the Torah. He set forth the supremacy of the Islamic civilization by expounding the distinctions between the Islamic civilization and western civilization.

Another proof for his being mujeddid is his scholarly side recognized by everybody. He had a mastery and high skill on Islamic sciences. He leaded a courageous, active, modest, non-compromised and devout life. He was exposed to torment and oppression while compiling the Risale-i Nur

The six concise essential elements (other elements can be added) indicate that he is the mujeddid of our century for us.

Kalam can be defined as the science which furnishes religious creed and tenets with proofs by providing scientific, rational, conclusive evidences and removing probable suspicions. The Risale-i Nur is kalam but it brought a novelty to kalam. Namely: When materialistic philosophy became prevalent in the Islamic world, as the last kalam scholars discerned that old kalam books were not adequate against materialistic issues, they tried to form a new science in kalam. Although some scholars such as İsmail Hakkı from Izmir, Abdullatif Harputi studied on this subject, none was able to be successful as much as Bediuzzaman.

Said Nursi formed a new kalam science which was same as classical kalam in respect of subject and purpose but different in method through his treaties.

Let’s mention about the new kalam science formed by Bediuzzaman

1-THE PROOF OF ORDER AND PURPOSE

Kalam scholars used hudus(createdness) and imkan(contingency) while proving the existence of Allah .Some scholars criticized that this proof was ambiguous, complex and was not understood by everybody. Those who criticized this proof said that the proof of order and purpose was a Quranic proof and it would be easily understood by everybody. Ustad Bediuzzaman employed this proof which is a Quranic method skillfully and persuasively.

Many scholars mentioned about the difficulty of Kalam. The Risale-i Nur made these difficult subjects very easy to understand in an extremely easy way. The widely-used basic element which makes these difficult issues easy in the treatises is simile method. The too hard issues were made so easy that even children can understand them.

4- THE SOUNDNESS OF THE PROOFS

Ustad Bediuzzaman Said Nursi speaks in a highly clear and precise style and with great arguments. He said that the treatises proved subjects regarding the belief (iman) in a precise and definite way, they totally shattered the foundation stones of the blasphemy. He mostly challenges atheist philosophers. He says that the treatise on Nature” This treatise puts naturalistic atheism to death with no chance of reanimation, and totally shatters the foundation stones of unbelief.”[le’malar (the Flashes)]

The new Said sets forth so rational and true proofs about the tenets of the belief (iman) that not only Muslim scholar but also obstinate European philosophers have to yield to the truth.

Not only issues regarding belief (iman) were proved with sound proofs but also the effect of iman on human sensimentality was dealt with. Weakness, destitution which are the inherent quality of human nature, decease and separation, human’s connection with past and future, solitude, death, the benefits of believing hereafter were dealt with in many treatises. It was proved that the belief (iman) strengthened the weak side of human being and blasphemy leads human to depressions. Ustad Bediuzzaman set forth that not only the happiness in the after world but also happiness in the world is only possible with the belief (iman).

The important point here is that he doesn’t deal with the belief as a matter of Muslims but the matter of humankind.

Ustad Bediuzzaman did his best both to stop the attacks on Islamic world and contribute to the coming of strong Islamic personality and social structure. So he preferred assuming an attitude in accordance with the need instead of limiting himself.

1- Ustad:It is used to donate a scholar or master of high skill and has gained extraordinary knowledge in a field to be able to teach students successfully.

3- Mujeddid is religious man who is believed to be assigned by Allah to renovate and revive religious life and clarify the meaning of Islamic creeds.

4- Tafsir (interpretation) is the Arabic word for exegesis or commentary, usually expounds the meaning of verses in the Qur’an.

5-Kalam is an Islamic science seeking to prove mainly Allah’s existence and basic Islamic tenets through reasonable proofs and dialectic.

7- Bid’at: Literary meaning is novelty, innovation. But technical meaning is “to invent” and “to create” a new thing which contradicts with holy the Koran and sunnah and our prophet’s (pbuh) hadiths.

8- Tarīqah means “way”, “path” or method. Sufi Orders or Sufi Brotherhoods are traditionally known as Tariqa . A Tarīqah is a school of Tasawuf.A tariqah has a Murshid, or Guide, who plays the role of leader or spiritual director of the organization.

9- Wahabism is a name sometimes applied to the conservative 18th century reformist call of Sunni Islam attributed to Muhammad ibn Abd-al-Wahhab, an Islamic scholar from what is today known as Saudi Arabia.

10-Tawhid: Central to Islamic belief is the oneness or unity (in Arabic: tawhid) of Allah