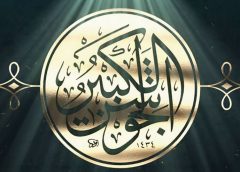 Jawshan is a unique duaʿ of our Prophet which is like a shield protecting us from material and spiritual dangers with Allah’s permission.

Jawshan al-Kabir is a great and comprehensive supplication that our Prophet Muhammad Alaihissalatu wassalam made with numerous names of Allah Subhanahu wa Taʿala. As a word of Persian origin, Jawshan means a kind of shield and armour for war. Jawshan is divided into two: Jawshan al-Kabir and Jawshan al-Saghir. Today Jawshan al-Kabir is well-known. Musa al-Kadhim related Jawshan al-Kabir from the Prophet Sallallāhu Alayhi Wasallam on the successive authority of Jafar al-Sadiq, Muhammad al-Baqir, Zayn al-Abidin, Imam Husayn and Imam Ali Radhiallahu ʿanhuma.

Imam Bediuzzaman Said Nursi related a narration about the virtues and features of Jawshan al-Kabir:

The doors of the heavens were opened. Archangel Jabrail Alayhissalam luminously came addressing the Prophet (saw) “I brought you the peace, blessing and gift of Allah (swt).” Prophet greeted His blessings in reverence. Jabrail (as) said “Take out your shield; read this duaʿ (prayer). If you carry and read this, it provides a better protection and effect to you than a shield.” Prophet (saw) asked Jabrail (as) “Is the effect of this just for me? Does it also include my ummah?” Jabrail (as) answered “O Messenger of Allah! This is a gift of Allah (swt) to you and your ummah. No one other than Allah (swt) knows the reward of this.”

One of the last period awliyas of the Ottoman, the mujaddid of the previous century, and one of Mawlana Halid al-Baghdadi’s successors, Ahmad Ziyaaddin Gumushanevi related the entire Jawshan al-Kabir on the authority of trustworthy narrations from Zaynal Abidin to Imam Ali Radhiallahu ʿanhu. Imam Said Nursi clearly stated that Jawshan al-Kabir is a sacred duaʿ of our Prophet (saw) and it is a unique supplication after the Holy Quran.

Reading Jawshan al-Kabir is a means of great rewards; because Jawshan is a dhikr (remembrance) and munajat (supplication). There is nothing contradictory to the Qur’an and the Sunnah. On the contrary, all the asma (names) and ma’rifa (knowledge) mentioned in it rely upon the Qur’an and the divine knowledge in the Sunnah.

Jawshan al-Kabir consists of 100 sections. Every section includes 10 parts in which Allah (swt) is praised with His Names and attributes. Thus, the entire Jawshan comprises 250 Names and 750 attributes describing Allah (swt). At the end of every section the following sentence is written:

Glory be unto You, You are without partner or fault! There is no god but You! Mercy, mercy, deliver/save/rescue us from Hell-fire!

Qur’an al-Karim is a book of shariah (law), hikmah (wisdom), ‘ilm (knowledge), haqiqah (truth), hidayah (guidance) and rahmah (mercy) for the believers, and shifa (healing) for the hearts. It is also a vast book of duaʿ. Various duaʿ verses are all scattered throughout the Qur’an. As quotations from the verses, in other words, based on the expressions used in the verses, new prayers can be made.

Described by Imam Nursi as “Referring to thousands of Divine Names explicitly or implicitly, and in a way a great supplication inspired from the Qur’an and superior to all the supplications of the ariffin (wise) who advanced in the ma’rifa (knowledge) of Allah (swt),” Jawshan al-Kabir prayer of our Prophet (saw) is a treasure of mysteries composed as quotations from the verses. Our Prophet asked his Lord to be protected from hell fire by explicitly or implicitly using the expressions in the Qur’an.

For example, we can see that every sentence from the 61st section of Jawshan al-Kabir below is quoted from a verse:

O Creator of darkness and light.
“(All) praise is (due) to Allah Who made the darkness and the light.” (Anʿam, 6:1)

O Subjugator of the sun and moon.
“He made the sun and the moon subservient to His command” (Raʿd, 13:2)

However, the ummah is also not deprived of those rewards. Jabrail (as) had said “O Messenger of Allah! This is a gift of Allah (swt) to you and your ummah. No one other than Allah (swt) knows the reward of this.” That means it is possible that every Muslim can get those rewards. Just as the sun taking a form on a sea surface and on a drop, there is a possibility of achieving those great rewards by every individual. But it would be based on person’s degree and talent.

Jawshan al-Kabir prayer, which means armour and includes numerous names of Allah (swt), is a spiritual protector with Allah’s permission. By reading Jawshan, while we are protected from the material and spiritual assaults and harms of Satan, we are also saved from many troubles and calamities with the protection of Allah (swt). Many awliyas and scholars indicated that some material and spiritual benefits will be obtained by those who constantly read Jawshan al-Kabir. Imam Bediuzzaman Said Nursi says that there are a thousand virtues of Jawshan al-Kabir and he mentions a few benefits of reading it himself:

“Against the material and spiritual poisons of my hypocrite enemies, Jawshan al-Kabir and Awrad al-Qudsi of Shah Naqshbandi protected me from the danger of death; they saved me maybe twenty times.”

Jawshan al-Kabir must be sincerely read, just for the sake of Allah (swt). One of the illnesses of today’s people is to assign a wrong meaning to the prayer and worship. Some people see the prayer and worship as means of materializing their desires and wishes. But this takes away the ikhlas (sincerity) which is a must for the worships. Worldly results and benefits cannot be the real reasons for the worships. If the worldly benefits are aimed while worshiping, that worship partly becomes invalid. Those who do not understand this wisdom read Jawshan al-Kabir intending to get some of those benefits. But they cannot achieve those benefits, and will not be able to achieve; they do not have such a right, indeed.

One thought on “Jawshan al-Kabir”