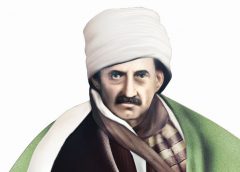 Imam Said Nursi defended the tenets of iman against the disbelief and saved the faith of millions of people with the strong rational evidences he presented in the Risale-i Nur.

Imam Bediuzzaman Said Nursi lived at such a time that the Risale-i Nur struggle can only be understood by realizing the spirit of the time during Imam Nursi lived.

It was during his life period with the exploration and advancement of the steam power that humanity had entered into a new era; a change from the agriculture base to the industrial base. Together with the industrial revolution, everything in this world had also changed. This phenomenon did not only impact the industrialization, however, it had expanded and covered throughout every aspects in the world covering the religion, politics, economics, human lifestyle as well as the relationship between the human and the nature.

Back then was the darkest age for the history of humankind which was known for the period of wars, massacres and relocations. Humanity almost attempted a global rebellion with the world wars. During the 20th century’s wars, the world had recorded a total loss of over hundred and eighty three million lives.

In the science world, there had been a change in people’s way of thinking; from ‘the knowledge based on past experiences’ to ‘the thinking system based on identification and measurement.’ Information about the things that cannot be measured or quantified started to lose its value.

The westerners together with this thought worked on examining and observing the nature of every single thing. They subjected those things to measurement and evaluation. This was how ‘naturalism’ developed. The nature of the things took centre stage. They rejected things which seemed inappropriate with the nature. We could say that, with the language of the Risale-i Nur, this was an expansion of looking at the world through ma’na-i ismi (self-indicative signification). That is, it is to look at the being by ignoring the Creator.

The philosophy of naturalism challenged the religion’s most fundamental principles. The matters pertaining to tawhid (belief in one god) being in the first place, the truths like the resurrection after death, the fundamentals of belief, the creation and the miracles were denied. Because in naturalism they claimed “Existence is imperishable; non-existence can never be created.” In fact, the science which is the proof of Allah Subhanahu wa Taʿala was interpreted in the name of denial to go against the religion.

Philosophical studies and discussions started in the enlightenment period in Europe highlighted the empirical rationality. Scientists developed a mechanical model of the universe by claiming that the world is a “product of causes-and-effect chain”. They argued that everything is a consequence of reasons and there is therefore no need for a God. This development was crowned with the materialism and positivism in the 19th century.

While the world of thoughts was shaped so, a philosophy of life based on hedonism and satisfying the passions developed on the other hand. This resulted in interest and selfishness. Such a goal set for the life brought about a sensual lifestyle.

The western philosophy launched the colonization in order to uphold the people of the west and meet the need for raw materials. Along with the threat to its freedom, the Islamic World also faced the western civilization’s challenging.

Since the 19th century, the western effects entered into the Islamic world slowly which then marked the beginning of the spreading of the philosophies of materialism and positivism. The Islamic scholars realized that this new western philosophy was different from the old ones. They identified this new philosophy and started to fight against it.

How pitiful it was that after the First World War, majority of the Muslim countries was colonized and western philosophy became more widespread. Even though Turkey had not been colonized, with the adoption of the European lifestyle after the Independence War the western philosophy also became widespread in Turkey. Imam Said Nursi explained this situation in the beginning of the Treatise on Nature: “I went to Ankara in 1338 AH (1922 AD). I realized that an extremely terrible irreligious ideology was working to spoil and poison the faith of Muslims while they were enjoying the victory of the Islamic army over the Greeks. ‘Alas,’ said I, ‘This dragon is going to attack the tenets of faith.’”

Imam Bediuzzaman Said Nursi lived in a time when the principles of belief and religious life had been totally denied across the world. For this reason, the most important duty is to strengthen the faith by changing one’s belief from taqlidi iman (imitative belief) to tahqiqi iman (critically verified belief); to reinforce the faith and to save the faith. To be occupied with the fundamentals of belief before anything else became an absolute necessity, an urgent need and even an obligation. Because a doubt about or a refusal of one of the tenets of belief would be more harmful than the good deeds (e.g. prayers) performed in careless manner.

Imam Said Nursi exactly understood the aims and sources of the denial. He realized that the unbelief- which targets the belief itself, its basic principles and roots- was not out of ignorance but of science and knowledge. It was for this reason that Imam Nursi put all his strength and energy and entered into this fight in order to defend and strengthen the belief against the disbelief.

He had identified that the main reason for all social diseases faced by the people in this century was the weakness of the belief. Realizing this fact, he worked so hard with all his effort in the cause of belief to strengthen and to be regained within the society. The major part of the Risale-i Nur collection talks about the tenets of the belief. A lot of treatises are designated to cater for this topic.

In facing with the western philosophy Imam Nursi defended the conviction of the existence of Allah (swt) can be proven’ with evidences that cannot be challenged and with a certainty that is as true and strong as two times two equals to four. He had proved all the issues relating to faith by starting with the matters pertaining to tawhid (belief in one god).

How can repairing and renovating the rooms prevent the collapse of a building the foundation of which is badly damaged? Or how can applying pesticides to branches and leaves save a tree whilst its roots are almost rotten?

By establishing strong belief Imam Nursi served for the safety and order of the country and showed the ways of peace and tranquillity. Presenting an education model which is based on the combination of the madrasah and school (representing the mind) with the tasawwuf (representing the heart) he changed the perceptions in the education.

Through Risale-i Nur millions of people have gained a strong faith and a consciousness of living an Islamic life by following the deeds of the Noble Prophet Sallallahu Alaihi wa Sallam. Therefore, it contributed to getting rid of the lustful desires and doing sincere deeds.