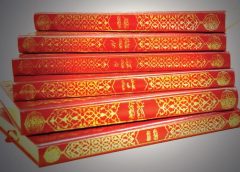 Since it is an interpretation of the Qur’an, the Risale-i Nur is a material and spiritual cure to the believers

In our previous articles, we have mentioned the worldly and spiritual, material and immaterial results and merits of handwriting the Risale-i Nur epistles in Qur’anic letters. In this article we will try to explain the material and immaterial healing qualities of the Qur’anic letters. Yes, just as the Risale-i Nur diproves the claims of irreligion and protect the truths of faith by means of reasonable and logical proofs, it also draws people’s attention to the Qur’an and the secret wisdom in its letters by explaining the merits of the Qur’anic letters. Imam Bediuzzaman Said Nursi wanted us benefit from these merits and wisdoms materially and spiritually by encouraging us to handwrite the Risale-i Nur epistles.

Our Lord, Allah (swt), says that the Qur’an is material and immaterial healing in the following verse: “And We send down of the Qur’an that which is healing and mercy for the believers.”1

We learn the power of the Qur’anic letters from the following hadith: Anas (ra) narrates: The Prophet (pbuh) entered the Masjid and there was a man who had performed Salat and was supplicating. He was saying in his supplication: “O Allah, none has the right to be worshipped but Allah, You are the One Who gives blessings, Originator of the heavens and the earth, Possessor of glory and generosity.” So the Prophet (pbuh) said: “Do you know what he has supplicated Allah with? By the One in Whose Hand is my soul, he has supplicated to Allah by His Greatest Name, the one which if He is called upon by it, He responds, and when He is asked by it, He gives.” 2 The fact that Rasullullah (pbuh) suggested in some hadith that reciting Falaq, Nas and Ayat al-Kursi in cases of fear and worry confirms our subject.

Imam Said Nursi explains that the Qur’anic letters are equipped with secret wisdoms and they are influential like material medicines in the 28th Flash as follows:

“As a result of this quality or feature of the air, when letters, the beings of the air, acquire sacredness; that is, when they take up the position of being receivers; that is, they take up the position of receivers because they are letters of the Qur’an, and become like switches, and even more so when the letters at the start of some Surahs become the sensitive central switches of those hidden relations, just as their existences in the air possess this quality, so their existences in the mind and even as inscriptions have a share in it. That is to say, like physical medicines, healing cures and other purposes may be achieved by reading and writing those letters.” 3

Since the Risale-i Nur is a tafseer (interpretation) of the truths of the Qur’an, it is a healing for spiritual illnesses. Moreover it also has a kind of healing for material illnesses by means of reading, handwriting and even memorizing this valuable work. Imam Said Nursi expresses in the following sentences that he has lived this reality himself and that it is proven by experience:

“(We learn) in his letter that reading the Risale-i Nur became a cure to Husrev’s illness. We have seen this many times – I even read it to the doctor who came to me the other day; it became a cure for both me and him. Yes, as it is a spiritual remedy, it sometimes becomes material medicine.”  4

While Imam Bediuzzaman Said Nursi was telling the worldly benefits of handwriting the Risale-i Nur in Qur’anic letters, he also announced the physical influence of the letters. The results like abundance in sustenance, peace and happiness in the heart, ease in livelihood, success with works 5 are the effects felt materially. The students of Risale-i Nur witness these effects by experience in return for their preserving the letters of the Qur’an in their service life. [They learn how to read and write the Ottoman Turkish which is in Qur’anic alphabet, thus preserving the Islamic letters in Turkey.]

In the following sentences our dear Ustaz, Bediuzzaman Said Nursi, explained that people will get rid of bad character and spiritually develop by reading and handwriting the Risale-i Nur truths. In an interpretation where he drew a great meaning from the verse of tayammum (dry ablution) he said:

“That is, be cleaned with a clean and certain water coming from the earth, in humility and abandoning the ego and modesty which are the qualities of the soil. With the implication and pointing of the expression “ فَامْسَحُوا بِوُجُوهِكُمْ وَاَيْد۪يكُمْ ” (wipe over your faces and hands) 6 turn to the light which comes from that source and read and benefit. And spread by the pens in your hands to get people to rise from moral corruption to high morals and progress.” 7

The truths we have quoted previously warn us about the following: The Qur’an is a healing and mercy revealed by Allah for humans. Just as its truths have this quality, its letters which are the moulds and cases of those meanings (of the truths) also have healing. This quality also exists in the Risale-i Nur where the truths of the Qur’an and faith are explained and proved. The Risale-i Nur is like a Qur’anic pharmacy which has spiritual remedies and material medicines. This should be kept in mind while handwriting the Risale-i Nur in Qur’anic letters. Do not deprive yourself from that healing by ignoring the letters by thinking that they are just letters. Believe in their material effects along with their spiritual merits. Know their value so that they do not slip through your fingers.

One thought on “Cure to the believers”