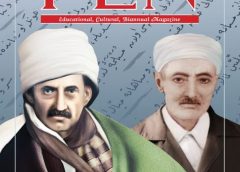 In this special edition of The Pen Magazine you will read pieces about Imam Bediuzzaman Said Nursi and his Risale-i Nur treatises.

A Short History of Risale-i Nur Service Mustafa TOPOZ
Imam Nursi, after living a life full of struggle to save the faith of the people and to defeat the materialist ideology, left behind a service which is now illuminating the paths of millions of people.

Imam Bediuzzaman Said Nursi gave tremendous service to the people of Turkey by protecting their faith under the harsh conditions of the former secular governments’ persecution in Turkey, handing down the Risale-i Nur collection and raising a generation with verified faith as a legacy to the community of Islam.

Imam Bediuzzaman Said Nursi defended the tenets of iman against the disbelief and saved the faith of millions of people with the strong rational evidences he presented in the Risale-i Nur.

The portrayal of Ahmed Husrev Altinbasak in Said Nursi’s treatises shows his significant place in the Risale-i Nur movement.

Imam Bediuzzaman Said Nursi, whose main aim in his life was to serve the Holy Qur’an, wanted to show the miraculousness of the Qur’an not only with the meaning but also with script of the Qur’an even to those who do not believe and are suspicious about all things unless they see it with their eyes due to their idea of materialism.

Risale-i Nur is such a strong tafseer, which expresses, explains, and proves the truths of faith of the Qur’an with strong evidence and proof, that it silences the most obstinate philosophers who deny the existence of Allah Subhanahu wa Ta’ala.

The Principles of the Risale-i Nur Movement Feridun SAMIL

As a collection of a book and people gathered around it to serve the Qur’an and Islam, the Risale-i Nur movement has basic principles to carry out its service effectively.

Life and the universe are manifestations of the Names of Allah (swt). Those Names, which are eternal, necessitate that their reflections also be eternal. In this perspective, life should go on even after death, though it may be in a different place and form.

The Proofs of the Existence and Oneness of Allah Cemaleddin SENER

When we research the creation from microorganisms and little particles to the massive galaxies and systems, we conclude that the creation came into being by the work of a deity who is Almighty and Omniscient. This deity is Allah (swt).

The work that destroys the cornerstone of irreligion Cemal ERSEN

As a work on the philosophy of naturalism’s pitfalls and fallacies, “the Treatise on Nature”of Imam Nursi is very effective in revealing the inner workings of this intellectually poisonous ideology.

It is hard to define and categorize Risale-i Nur as a collection of Islamic books. Is it a kind of tafsir or a book of irshad? How shall we define it? People who just come across it may sometimes find it difficult to get started, and to comprehend it and get benefit from it. Here is the first of a series of articles aiming at introducing it to the
world of readers.

How to keep away from committing sins in modern times is a thorny issue to handle, for they are widespread and even those who have strong belief may experience difficulty. The Risale-i Nur applies solutions which seem unprecedented.

The Risale-i Nur: the Concept, Content and how to Benefit from it – 2

The work that destroys the cornerstone of irreligion