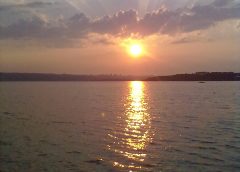 How could we feel that Allah (SWT) watches us for everything we do, even when we are reading this article?

In order to feel Allah with us all the time and to feel that He watches us at any time, we need to have a strong belief. The sign of feeling that we are in the presence of Allah   is to abstain from the sins, to perform good deeds that will please Allah and perform our actions just for the sake of Allah. This is just possible to struggle to increase our iman (faith) to high level called “iman al-tahqiqi”.

It is essential and fardh (obligatory) for every Muslim to increase his iman. Faith has levels and it is not enough just to say “I believe” to achieve the high level of iman. What has concerned the companions (sahabas) of the Prophet Muhammad (PBUH) and the scholars is the difficulty to keep iman fresh till the end of life.

There are two types of faith according to the scholars. One type is imitative (taqlidi) while the other is verified (tahqiqi).

Imitative faith (iman al-taqlidi) is the faith which a person has just through the people around him without any proofs.

Since a person having imitative belief doesn’t have any investigation and Islamic studies to acquire certain knowledge about faith he just believes in the way that he observes in the people around him. This kind of belief is weak and shakeable in the face of doubts and misgivings of disbelief, because it doesn’t stand on any proofs and knowledge.

However, tahqiqi iman which is the “certain, verified faith” means believing in Allah   as strong as seeing Him. This kind of belief is obtained as a result of acquiring certain knowledge of all the questions related to belief through close investigation and Islamic studies. Since “verified belief” has the answers of all questions of doubt and disbelief, it is too strong, firm and unshakable.

Ulama (scholars) are in consensus that even though it is valid to have an imitative faith, it is fardh for very Muslim to raise their faith to the ‘certain, verified belief’ from imitative level. (Aliyy-ul Qari, Commentary of Fiqh-i Akbar)

How can we achieve tahqiqi iman?

This kind of belief is obtained as a result of acquiring certain knowledge of all the questions related to belief through close investigation and Islamic studies. Since “verified belief” has the answers of all questions of doubt and disbelief, it is so strong, firm and unshakable.

In order to achieve tahqiqi iman we should;

1. Realize and comprehend how much we need tahqiqi iman for the pleasure of both this world and the hereafter.

2. Ponder on death to realize that the only assurance to pass away with iman is having a “tahqiqi iman” in this world. Because scholars state that devil may give doubts to the mind of the person who is about to die. However, if he has “tahqiqi iman”, it is not possible for devil to harm and remove his iman. Because, tahqiqi iman does not exist just in the mind of a believer, on the contrary it expands, surrounds the heart, the soul and nearly all the senses and feelings that nothing can damage it.

3. Implement what iman requires, in other words perform the obligatory actions and abstain the major sins.

4. Recite the holy book Quran and try to comprehend its divine message; because Quran is full of proves and lessons that strengthen iman. All iman facts, the purpose of the creation, why Allah   charged the prophets, what the duties of the angels are, and what the truth of the hereafter is and so on are explained in a persuasive manner in the Quran.

6. Reflect upon the creatures, in other words the unique works of art of Allah   surrounding us in order to ponder on the iman lessons that we get through the holy Quran and the interpretations.

We should reflect upon the attributes and the names of Allah   that are manifested on the creatures and make a habit of reflecting. (tafakkur)

7. In order to achieve all these aforementioned aims, we need to be sincere, because sincerity is the most generous means that will carry you toward your goal.

The Sunnah of the Prophet Muhammad (PBUH) makes you feel that you are constantly in the presence of Allah. Because following the Sunnah directly reminds us of the personality of the Prophet. That remembrance leads into the feeling that you are always seen by Allah. When one follows the Prophet even in dealings of the least significance and in the practices of daily life such as eating, drinking or sleeping, such ordinary transactions and natural acts become meritorious acts of worship and actions of the Shari’a. This is because a person who follows the Prophet even in such everyday actions thinks that those good manners of conduct to be among the deeds commended by the Shari’a. Through this recollection, their hearts turn to Almighty Allah, the Legislator of the Sharia. This gives some sort of spiritual satisfaction and sense of worship.

As Imam Said Nursi pointed out above, to follow the Sunnah even in the least significance transactions proves our love for Allah in accordance with the verse,

“Say; If you love Allah, then follow me, Allah will love you and forgive you your faults, and Allah is Forgiving, Merciful. (Al Imran, 3:31)”

And it makes us gain the state of ihsan. For example, when a merchant observes the principles of the Sunnah while doing his commercial transactions he will remember the Prophet Muhammad (PBUH) as the doer and instructor of these actions, because he is the owner of the Sahari’a. And from that point he will reach Allah, because it is Allah who controls and sometimes corrects each act and behaviour of the Prophet Muhammad (PBUH) and who is the real owner of the Shari’a. Namely, he will realize who sees and follows him always thinking that it is Allah who demands that business to be done in this way while doing shopping. And the one who considers himself under the constant surveillance of Allah will abstain from deceiving in trade.

When you visit an administrator or a governor you try to be careful not to make a mistake and be respectful to the authority. So in the same way when you consider yourself in the presence of Almighty, All-creating, All-seeing, All-hearing Allah you abstain from making mistakes which are against His pleasure. In that way, you will lead a proper life caring about your actions. If a Muslim applies that principle to all his life he will reach immediately to Allah thanks to that connection and he will understand that Allah sees him even if he does not see Him.

Contemplation leads one to feel his being at Allah’s presence and that leads to sincerity. He gains the sincerity and gets rid of hypocrisy by thinking that Allah is present everywhere, every time and not seeking the pleasure of anyone other than Him considering that it is insolence to do so, gaining the feeling of constantly being in the presence of Allah through the strength of verified belief and the gleams of thought based on observing creatures faithfully.

If a person who tries to earn his children’s livelihood looks at the universe with intention of learning a lesson, he sees that all poor, weak and helpless creatures are given their daily livelihood perfectly. Especially, it is really remarkable that livelihood of those plants which cannot move is provided without bothering them. Of course it is not possible that Allah   forgets feeding the humankind, which is the most honourable of the creatures, while He does not neglect feeding the plants which are inferior to humankind. Of course, Allah   who hears and accepts the prayers that the plants do with their tongue of disposition will hear the prayers that humankind do verbally and with their tongue of disposition. Considering these contemplative processes, that person who is seeking for his livelihood will conclude that the All-Provider and All-Munificent Allah, who guarantees the food of all creatures, will not forget him and leave him without food and He will provide him with his livelihood. Thus; “I should recognize that He always observes me and I should not seek attention and help of anybody other than Him.” That kind of an attitude will result in sincerity which means gaining the pleasure of Allah.

In a nutshell, the way to always feel ourselves in the presence of Allah is with three stages;

A version of this article appeared on askaquestionto.us