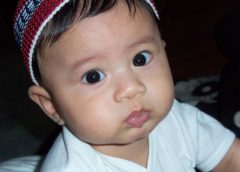 Do children whose parents serve in the way of Allah share rewards of their parents in hereafter? Do parents have a share of rewards attained by their children?

We couldn’t find a verse or narration or an explanation about benefits of children coming from parents’ rewards. But their praying for their children is certainly beneficial for children with the permission of Allah.

And it is a well-known fact that the rewards of children are counted in favour of parents too. Some of hadiths proving this fact are as follows:

“When a man dies, his acts come to an end, but three; recurring charity, or knowledge (by which people) benefit, or a pious child who prays for him (for the deceased).” (Muslim)

“One of the good deeds continuing to give reward for its causer after death is to raise a pious child. After parents died, praying of such a child reaches to his parents.” (Muslim)

“Someone who does these seven deeds acquires continuous rewards even after death:
1- Writing a scholarly work
2- Building a fountain
3- Opening a well
4- Planting a date palm tree,
5- Building a mosque,
6- Writing a copy of the Quran,
7- Raising a pious child who will pray for him after his death”  (Bayhaaqi, Abu Dawud)

“The dead in his grave is like the drowning man calling for help, waiting for a praying from a father or mother or son or trustworthy friend, when one of these praying arrives him, he feels happiness more than like he reunites with the world and everything in the world. Allah Almighty gives mercy to the dead as much as mountains due to praying of livings. Gifts of livings for dead ones are to pray for them and to repent on behalf of them.” (Daylami’s Firdaws, 4:391)

Registering rewards after death also means that they are registered before death too.

It is said that children’s pious deeds are registered on behalf of parents after parents pass away and so when children sin. Is it registered to parents’ account either?

If there is no role of parents with the sins committed by child, it is not recorded on behalf of parents additionally. But if parents did not carry out the duty of raising children in Islamic good manners, and furthermore if children commit sin because of parents’ direction in that way, parents are responsible for those sins.

For this reason, parents should be very sensitive when they teach children good manners and moral values of Islam. Muslim parents should think very carefully when they say “I don’t interfere with the choices of my children, they decide according to what they want” by acting in effect of the western culture and supposing that as an advanced idea of living. It is to endanger themselves with their children in hereafter.

Allah Almighty explains some of parents and children’s situation in hereafter with a verse:

Whoever does not want to be in loss in hereafter is responsible for teaching and advising their children Islam and keeping them away from sins.