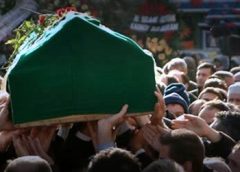 This question comes to everybody. No matter who we are or how we live or in which position we act the reality of death never changes. In a certain time and place, in one way or another it will come and we will leave this world with the visit of Azrael, the angel of death.

Death is not annihilation and absolute non-existence; it is rather an act, a change of abode, and the spirit’s liberation from its place of confinement. (Signs of Miraculousness-From the Risale-i Nur Collection)
It is all about termination of life. This is totally what all mankind is afraid of. There has always been a tense struggle to keep this life in hand or to postpone getting old. Tendency for an endless life is a part of our creation. The key to an endless life is to understand the meaning and purpose of death. So we must use the energy coming with this tendency in the right place.

Abu Hurayra reported that the Messenger of Allah, may Allah bless him and grant him peace, said, “Remember frequently the thing that cuts off pleasures,” i.e. death.” [at-Tirmidhi].

Evaluating this matter from a worldly perspective, it might sound a little bit curious to remember it so often. Thousands of people from various parts of the world are spending a great deal of money just to be blind against these truths. Such attempts mostly make it faster on the way of death. Drugs, alcohol and extremist relationships. And even they are not aware that “A person who closes his eyes only himself does not see; he does not make it night for anyone else.” (The Sixteenth Letter-Third Point-From the Risale-i Nur Collection)
To be afraid of it, at first, we must know it well enough. So what is death?

“Death is a great bounty because it means one is freed from the duties and obligations of life, which become burdensome. It is also a door through which one passes in order to join and be united with one’s friends, ninety-nine out of a hundred of whom are already in the Intermediate Realm.” (The first letter-The second question-From the Risale-i Nur Collection)

It is understood from the passage that the fear of the death is unnecessary and useless. On the condition of living in the way of Qur-an and Sunnah, Allah gives this chance to all humanity to reach their loved ones and take their retirement from this burdensome life. The fear must be for not doing the duties ordered through prophets and books. This may lead us to fail. The possibility of this failure is the thing that we must be most afraid of. This is called Khawf wa Raja’. (Fear and Hope) Otherwise, we can’t even compare the value of eternal happiness with the termination of such short painful worldly life.

May Allah keep us awake through remembering the reality of death. So that we can check ourselves again and again to follow the right path. I would like to close my article with one of the hadith of our Prophet that is as precious as gold. Ibn ‘Umar said, “The Messenger of Allah, may Allah bless him and grant him peace, took me by the shoulder and said, ‘Be in this world as if you were a stranger or a traveller on the road.”