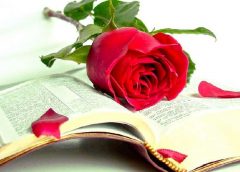 Chosen above the women

Indeed, Allah chose Adam and Noah and the family of Abraham and the family of ‘Imran (his daughter Mary and Jesus (Isa) peace be upon him) over the worlds as descendants of one another. And Allah (SWT) is All-Hearing and All- Knowing. (Âli ‘Im’rân, 33, 34)

Virgin Mary, or Hazrat Maryam as known among Muslims, is among the most praised women in the Qur’an and Hadith (sayings of Prophet Muhammad (PBUH)). She is a personality who had the characteristics like chastity, being sinless, and devotion.

Hazrat Maryam has been “chosen above the women of the worlds” (3: 42) and she is one of the best examples for the worshippers who want to be sincere and virtuous servants of Creator.

Hazrat Maryam is the only woman whose name is given to a surah (chapter) in the Qur’an.

Her father was Imran, a great scholar of his time; and her mother was Hanne, a sincere woman who made a promise to her Lord saying, “My Lord, indeed I have pledged to You what is in my womb, consecrated [for Your service], so accept this from me. Indeed, You are the All-Hearing, the All-Knowing.” (Âli ‘Im’rân, 35)

A flower raised in good manner

Allah (SWT) accepted her prayers and gave her a baby. Hanne expected to give birth to a boy; but she gave birth to a baby girl, Maryam. Hanne still kept her word and put Maryam to Bayt al-Maqdis (Jerusalem) expecting her to be a good servant and worshipper to the Creator.

Many of the scholars of the time wanted to be Maryam’s teacher, because she was the daughter of Imran who was the most knowledgeable of them. However, the duty to educate such a person was given to another beloved servant of Allah, Prophet Zechariah (alayhissalam). “So her Lord accepted her with good acceptance and caused her to grow in a good manner and put her in the care of Zechariah.” (Âli ‘Im’rân, 37) Allah raised Hazrat Maryam with utter care like a beautiful flower.

The Prophet Zechariah was the husband of Maryam’s aunt. He fell all over Maryam’s education. He looked after her, and provided her needs. He, on the other hand, witnessed that Maryam had food in her room. “Every time Zechariah entered upon her in the prayer chamber, he found with her provision. He said, ‘O Mary, from where is this [coming] to you?’ She said, ‘It is from Allah. Indeed, Allah provides for whom He wills without account.’ “(Âli ‘Im’rân, 37)

MARY: The Mother of JESUS (peace be upon him)

Maryam was keen on worship to her Lord. After a while she went far away from her family and people in order to worship her Lord. “…she withdrew from her family to a place toward the east,” (Maryam, 16). And that was the time she met the Gabriel in the shape of a man. She was afraid to see him and immediately sought refuge in the Most Merciful from him (Maryam, 18). However, he was only a messenger of Lord to give her [news of] a pure boy. (Maryam, 19)

Maryam was astonished that she would have a baby. How could she have a boy while no man had touched her and she had not been unchaste? (19:20) But Gabriel said, “Thus [it will be]; your Lord says, ‘It is easy for Me, and We will make him a sign to the people and a mercy from Us. And it is a matter [already] decreed.’ “(Maryam, 21)

Then she got pregnant, and withdrew to a remote place. “And the pains of childbirth drove her to the trunk of a palm tree. She said, ‘Oh, I wish I had died before this and was in oblivion, forgotten.’ ” (Maryam, 23)

She was afraid, because she had a baby who did not have a father. But her Lord consoled her and gave her immediate help. “But he (Gabriel) called her from below her, “Do not grieve; your Lord has provided beneath you a stream. And shake toward you the trunk of the palm tree; it will drop upon you ripe, fresh dates,” (Maryam, 24, 25).

It is obvious that Hazrat Maryam’s being miraculously given fresh fruits from a dead palm tree is a sign that Prophet Isa (Jesus) alayhissalam was born in a miraculous way, and it is to console her with such a bounty and favour (Râzî, Volume 11/21, 207).

Obedient to her Lord

Then her Lord said her to go back her family. She hesitated, but it was said by her Lord whom she worshipped alone. Moreover, she knew that ‘believers should seek Divine pleasure in their actions. If Almighty Allah is pleased, it is of no importance even should the whole world be displeased. If He accepts an action and everyone else rejects it, it has no effect. Once His pleasure has been gained and He has accepted an action, even if you do not ask it of Him, should He wish it and His wisdom requires it, He will make others accept it. He will make them consent to it too’ (Bediuzzaman, 21st Flash). For this reason, she went back home keeping in mind what her Lord said: “So eat and drink and be contented. And if you see from among humanity anyone, say, ‘Indeed, I have vowed to the Most Merciful abstention, so I will not speak today to [any] man.’ ” (Maryam, 26)

The people began to ask her questions and cast aspersions to Hazrat Maryam as if they did not know how devout she was. They blamed her with an evil thing that she would never do. Hazrat Maryam did not utter any word, but the blessed baby in the cradle did: “So she pointed to him. They said, ‘How can we speak to one who is in the cradle a child?’ [Isa /Jesus] said, ‘Indeed, I am the servant of Allah. He has given me the Scripture and made me a prophet. And He has made me blessed wherever I am and has enjoined upon me prayer and zakah as long as I remain alive. And [made me] dutiful to my mother, and He has not made me a wretched tyrant. And peace is on me the day I was born and the day I will die and the day I am raised alive.’ ” (Maryam, 29-33)

Although they witnessed a baby spoke in the cradle, they did not believe. And moreover, although they believed the first creation of Prophet Adam having no mother and father, they could not believe that Hazrat Maryam had a baby without a father, which is miraculous deed of the Creator. And out of their obstinacy and tyranny they had really bad thoughts about Prophet Zechariah and blamed him with something he had not done. Finally they did such a thing that it cannot be forgiven ever: they murdered Prophet Zechariah.

Hazrat Maryam was a subject of honour and glory; innocent and pure, free of bad morals; a distinguished woman as the mother of Prophet Isa (Jesus) alayhissalam. As a result of this bounty, she used to thank her Lord by busying herself with worship, prayer and prostrations (kneeling and bowing). She was always together with obedient people, not with the heedless ones. She would worship in Bayt al-Maqdis (Jerusalem) with the believers. “O Mary, be devoutly obedient to your Lord and prostrate and bow with those who bow [in prayer].” (Âli ‘Im’rân, 43)

All the prophets have the same message in essence: there is one Creator, and there is hereafter.

The idea in religion is to refrain from polytheism, for this reason Christians used to abstain from the idols which were peculiar to pagans. Afterwards, depictions were hanged in the chapels of Christians and the churches were made rather resemble the temples of polytheists. (Qisas al-Anbiya, Ahmed Cevdet, p.44-45, translated from the Turkish version)

As a result of this tragic change in understanding the essence of religion, today we see the various depictions and statues of Hazrat Maryam. She is seen as a holy personality; and this causes people not to take her as a good example for themselves.

Hazrat Maryam is among the highest personalities, and among the devout worshippers of Creator. She is not to be taken as a holy entity, but a great example of being real human worshipper and a model personality.

One thought on “Virgin Mary (Maryam): a model personality”