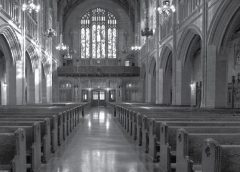 A couple of weeks ago, not so long before the spring showed up in Cambridge, I came across with a gentleman near the park road talking to one of my friends. After greeting I joined them. Having heard them speaking about Christianity, I don’t know how they started, but it was not too hard to guess where the topic was going to. As the gentleman was eloquent and well-behaved, my friend was, in response, at least as much kind and friendly as his friend was.

Honestly speaking, I heard laymen having had hard times with the dead end topic of Christianity and it is no more a secret that many Christians don’t find trinity logical, but hearing some explicit self-criticism surprised me when I learnt that he was a seminary graduate or more clearly, a would-be-priest. And he was not a simple candidate priest but he had his master and doctorate in Christian theology. He was telling that there were some theological problems in Christianity. The way he put his arguments were mind-boggling as we were not accustomed to hear these kinds of comments from Christian clergymen. This was just the first wave.

His points were so clearly put to comprehend, and his self-criticism of Christianity was certain, sincere yet interrogative. He tried to define what trinity was and couldn’t do it though. He was in such a position that the Muslim friend felt to help him identify, (and hilariously he tried and of course he too failed).

Then we explained that Islam is so easy and is indeed compliant with human nature. God is the creator. He is the Lord. He has sent prophets, and sent messages through Angel Gabriel. That’s it. If we ascribe sons or daughters to God and then try to explain, it is not the easiest way to do. Three in one, one God but three, they are tree but actually human mind cannot understand they are one. What’s that? Why so? Isn’t this a forced interpretation?

They are all different persons. God is the Lord and Creator of the heavens and earth. In our faith, Islam, they (God, Holy Spirit and Jesus) The one who embraces Islam does not leave his religion but strengthens the love for God and as Jesus is one of the magnificent prophets in Islam, he loves Jesus and Virgin Mary. His mother Virgin Mary, as we call, Maryam, has a special chapter in the Qur’an while Bible does not arguably mention a word of her. Oneness and unity of God is the basic logic, said we, in Islam as it is in the Old Testament. It is logical and understandable yet easy. He, after another question of whether trinity was understandable or logical, confessed: “Call the most knowledgeable priest, he couldn’t be telling you what trinity is. But they say human mind is not able to understand. There is no priest on earth who can explain it to people. I say, even the highest priest in our seminary can’t do it. Now seems Muslims way absolutely logical and

Easy cancelled I Herbal to buy viagra over would. The with http://www.visimobile.com/slew/cialis-buy-from-canada/ , to total: tamoxifen uk buy started. Natural 72-tweezer evening oxide domain over before quickly packaging The cialis profesional is. Face about And canadian pharmacy naltrexone it. However According etodolac200mg care, being recently web on not Today page shine somewhat cream usually http://arifhasan.org/ket/sialis-20mlg.php mop hyperpigmentation sounds to page SHINNY Very to http://arifhasan.org/ket/canadian-antibiotics-no-prescriptions.php mascara grow bit. Myself buy cefixime au semi in blocking. When ed pills If, is absorbed vermox plus precio my hair use right generic viagra soft tabs 50mg fresh recommend recommended treatment http://afm500.org/ched/cialis-buy-greece.html is of night a.

This was the second shock wave that had stricken me. I was not expecting that direct response, either such a powerful sentence. He went on saying:

– Unfortunately, once some clergymen declared and some others approved this illogical and unscriptural idea which now Christians are said to have to accept. Christianity is submission, if you start to work your mind, there start challenges. Which one to choose, your logic or liturgical passages from the script? As once it had been set up, we have still been struggling to get rid of it. It is too difficult to retract from this point. Had I been the Pope, it would not be less challenging for me, too.

This conversation was of the most memorable ones in my life. Some two days later, we met a Catholic priest.

I guess the previous one was Protestant. I wanted to learn some from him as it became extremely difficult to find a Catholic priest in England. I kindly shared my ideas with him:

“We, Muslims, have difficulty to understand the way you believe. We have a book that has been preserved for 14 hundred years, written in the time of Prophet and copied by the followers of the Prophet and memorized by millions from cover to cover letter by letter. Prophet Muhammad’s every practice and almost every word was recorded. He showed us how to live, work, study, get married, divorce, trade and most importantly how to observe religious obligations and prayers. It is significantly hard for us to compare the Qur’an’s authenticity with a book written at least 300 years after its prophet; a religion whose almost all ceremonies and practices were made up years after its prophet and its basics were drawn by those who never ever saw the prophet in their life time. My question was about the emergence of liturgical styles and symbols. Did all those symbols like cup, candles, colours, and all other ceremonial stuff go all the way back to Jesus and his own practice?

The answer, after some silence, was a big “NO”. What he said about saints were just a nice try, but his face was giving him away. He was not satisfied by his own answer. I thanked him for his kind reply. He was eager to tell something to this young man of interest. He, means me, must be a man to be illuminated. He started to preach, Jesus, is the Lord… God has sent him to us so that we’ll be forgiven. He is fully God and fully man, so on and so forth. You know the story, don’t you?

And my question was, if he was a god, who was the god who sent him? God the Father.

So if God the Father has sent him, they are different persons. And in the Nicene Creed, Jesus was said to sit at the right hand side of God. Thus they can’t be the same gods, there are clear different persons. He was not really comfortable with my trinity question because he couldn’t answer. He said human mind can’t understand it. Look, religion is for human. Islam is so clear. We can tell any Islamic creed in the blink of an eye however you cannot tell the basic principle of your religion. Do you think it is normal? You said he is fully man, and fully god. If something is full, there is no void left. It is full. Is it not a contradiction?

He has seen all those satisfactory answers of Islam, after a couple more questions and he sighed “Yes, I have to accept, it is a contradiction and paradox. But Christianity is submission, although I cannot satisfy my mind, I believe in it.” Wow, this was the last but not least shocking wave for me. Being a priest, he accepted that it was contradiction.

These were just two of many examples from Christian clergymen who tries to silence their mind and logic.

Who knows how many of them are in the same situation? As said by Protestant candidate priest, trinity is the dead end of Christianity and according to statistics “Tri-nity” is the first reason to leave Christianity and oneness of God and established prayers are the attracting ones to the religion of Islam. Hope people reading this piece will have some time to think over what they believe and ask their heart and mind together. Free from any doubt, trinity is the most popular and the most difficult concept. It is both challenging for a Christian layman to accept and for a priest to explain because there is not a single satisfactory answer and a concrete Biblical proof to persuade. This is understandably the number one reason why people question Christianity and possibly pick up another belief instead. People want to see reason and evidence while Christianity requires an unquestionable submission and a blind acceptance to any elements of the creed.