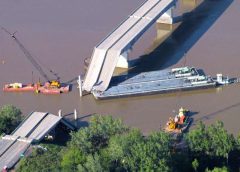 Disasters are facts of life and they are not meaningless. If we try to read the messages that they convey to us, we may receive the wisdom behind them.

“And fear a trial which will not strike those who have wronged among you exclusively, and know that Allah is severe in penalty.” (Anfal, 8:25)

“If My servants were to obey Me, I should give them rain by night, make the sun rise on them by day, and not cause them to hear the sound of thunder.” (Tirmidhi, 5310)

We understand from the verse and the hadith qudsi (words of Allah heard from the Prophet) that calamities are the results of the faults of the majority. Those afflicted with calamities divide into three groups:

1 – The pious people and innocent children. Since life is a trial, they also get affected by the calamities which affect the majority, like earthquakes. However, Allah, the Merciful and the Compassionate, compensates them for their loss; He gives the reward of a martyr to those who die, the reward of charity to those who lose their belongings, and many rewards to those who suffer pains. In this respect, the calamity becomes a mercy to them, and indeed, a kind of worship.

Man might perform the prayers just to make people think that he is a practicing Muslim. However, nobody wants his own home to be destroyed or his own child to die of illness just to make people think that he is a sincere Muslim. Therefore, since the unintentional acts of worship are not performed by the will, there is no hypocrisy in them. And since these are the most sincere acts of worship, Allah makes the people who are most beloved to Him perform this type of worship. It is narrated that “Those afflicted with the severest trials are the prophets, then the saints and those like them.” (Bukhari, Marda 3; Tirmidhi, Zuhd 57)

For example, Allah tested the Prophet Ibrahim (PUH) with slaughtering Ismail, his son. And Ismail was tested with being slaughtered. And Hajar, Ismail’s mother, was tested as a parent whose son was going to be sacrificed (which was actually a disaster for all three of them). Those three mature people passed the test by submitting to the order of Allah. Their manners pleased Allah so much that instead of testing us like those three blessed people, Allah made stoning the Satan in three places like Ismail did against Satan’s whispers, and slaughtering an animal in Mina like the Prophet Ibrahim did, and running between Safa and Marwa like Hajar did (so that we sincerely try to be like them) during the Hajj, a means of forgiving our sins.

Allah gave calamities to the Prophet Ayyub (PUH) as mentioned in the Qur’an so that he would become an example to people. And He gave the disaster mentioned in the Qur’an to the Prophet Yunus (PUH) so that we learn that there is no saviour other than Allah and we must not abandon hope in Allah’s mercy, even when we have the most severe disasters.
Moreover, along with the material disasters Allah gave spiritual calamities, which were harsher than the others, to the Prophet Muhammad (PBUH). These spiritual disasters were so much more severe than those of the other prophets that the Qur’an says, “Perhaps, [O Muhammad], you would kill yourself with grief that they will not be believers.” (Shu’ara, 26:3)
Just as a merciful father of a family is distressed by the troubles of the family members, so too the Caliph Umar (RA), who was the symbol of justice and had much mercy, was grieved, and said, “If a wolf kills a lamb on the bank of the Tigris river, Divine Justice will take me to task for it.”

It can be understood that how much a Prophet, the head of the universe which can be considered as a great family, suffers because of his compassion and his concern for that family, the people and the jinn to whom he was sent as a messenger. That is, calamities are actually a real mercy and a sincere worship for the people of perfection. May Allah include us among that community! Amin. 2 – The second group of those who are afflicted by calamities are those who believe, but are sinners. Calamities like earthquakes can be a mercy for them too, because disasters bring about the redemption of sins. Allah mostly gives calamities, troubles and illnesses to His sinful servants in this world, so that their punishment is not left to be imposed in the hereafter and in hell.
“Just as the penalties of those perpetrating small crimes are delivered locally, and serious crimes are sent to the high courts, so too, according to the rules, the small errors of believers are punished swiftly and in part in this world, in order to quickly purify them.” (The Tenth Flash, Bediuzzaman Said Nursi)

Cutting the chest during an operation is a mercy for someone who has to have heart surgery in order to recover. That person willingly endures the pains of the surgery.

Likewise, troubles and calamities are the surgeries and treatments of the sinful believers for the benefit of their life in the hereafter. They must put up with the pains in this world for their eternal health and wellbeing. What makes turns disaster into worship for a person is patience and thankfulness. If a believer is not patient, disasters cannot be worship for them. If someone afflicted with a disaster like an earthquake endures that calamity, and dies in the end, he gets the reward of martyrdom. His lost belongings become charity, and bring him rewards. The pain he suffers becomes worship. Even if he loses his life in the world, he gains an eternal life in the hereafter. Those who do not put up with the calamities cannot prevent the disasters, and moreover, they lose all the things they have. As a matter of fact, life becomes purified by means of difficult events and troubles, and becomes worthy of paradise.

The following story expresses this truth:

“A certain man came to Moses and desired to be taught the language of animals, for, he said, men used their language only to get food and for purposes of deception, and possibly a knowledge of animals’ languages might stimulate his faith.

Moses was very unwilling to comply with his request, as he knew such knowledge would prove destructive to him, but, on his persisting, took counsel of Allah, and finally taught him the language of fowls and dogs.

Next morning the man went amongst the fowls, and heard a discussion between the cock and the dog. The dog was abusing the cock for picking up the morsels of bread which fell from their master’s table, because the cock could find plenty of grains of corn to eat, whereas the dog could only eat bread. The cock, to appease him, said that on the morrow the master’s horse would die, and then the dog would have enough and to spare. The master, hearing this, at once sold his horse, and the dog, being disappointed with his meal, again attacked the cock.

The cock then told him the mule would die, whereupon the master sold the mule. Then the cock foretold the death of a slave, and the master again sold the slave.

At this the dog, losing patience, upbraided the cock as the chief of deceivers, and the cock excused himself by showing that all three deaths had taken place just as he had predicted, but the master had sold the horse, mule, and slave, and had thrown the loss on others. He added that, to punish him for his fraudulent dealing, the master would himself die on the morrow, and there would be plenty for the dog to eat at the funeral feast.

Hearing this, the master went to Moses in great distress, and prayed to be saved. Moses besought the Lord for him, and gained permission that he should die in the peace of God.”

Yes, “You do not want your nose to bleed, but it bleeds. That bleeding helps your health.” As we understand from the story, since the troubles and disasters become charity for the believers, they are a means to prevent greater calamities. And moreover, there is mercy behind every disaster. For this reason, patience and thankfulness are our duty.

“Would You destroy us for what the foolish among us have done? [Do not destroy us.]” (Araf, 7:155) As it is expressed in this verse, may Allah not destroy us because of the oppressors. Amen.

As understood from the hadith, it is only possible with enjoining good and forbidding evil (amr bi al-ma’rouf wa nahy an al-munkar) that the believers are saved from the worldly disasters and the torments in the hereafter. That is, the struggle against oppression is possible when learning the commands of Islam, living them, teaching and helping the others to live them. This has been a principle for the communities of all prophets. They reached happiness and safety when they learned and lived their religions, and taught them to others. When they neglected and gave up doing that, they faced disasters and troubles. We ask Allah SWT to protect us, our brothers and sisters, all the Muslims and our nation from disasters, calamities and troubles. Amen.

The illness of intellectual arrogance