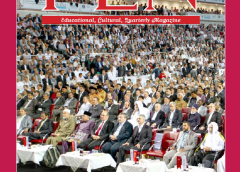 Unity, solidarity, cooperation, being together, acting together and helping each other… All these actions and positions are advised, commanded and recommended many times to the Muslims in the Qur’an and the Sunnah of the Prophet. As Muslims, we are the people of tawhid, and we are obliged to achieve unity. Unity in belief entails the unity of hearts. In modern times, achieving unity is particularly indispensable for us and it is the only way out of the chaotic atmosphere that we live in. To point out this fact, Imam Nursi says, “The most important obligatory duty of this time is establishing Islamic unity.”

The Wisdom Behind Calamities by Zakir Cetin

Allah tested the Prophet Ibrahim (PUH) with slaughtering Ismail, his son. And Ismail was tested with being slaughtered. And Hajar, Ismail’s mother, was tested as a parent whose son was going to be sacrificed (which was actually a disaster for all three of them).

Just as a merciful father of a family is distressed by the troubles of the family members, so too the Caliph Umar (RA), who was the symbol of justice and had much mercy, was grieved, and said, “If a wolf kills a lamb on the bank of the Tigris river, Divine Justice will take me to task for it.”

When we research the creation from microorganisms and little particles to the massive galaxies and systems, we conclude that the creation came into being by the work of a deity who is Almighty and Omniscient. This deity is Allah (SWT).

Nothing can form on its own. If this universe has a beginning, then it needs a creator who is eternal. This creator, as the Qur’an makes clear to us, is Allah Who has eternal knowledge and power. He created the universe out of nonexistence with a big bang. The Necessity and Importance of Islamic Unity by Idris Tuzun

The Current Situation of  the Muslims can be describe as “The treatment to be prescribed for a great, yet unfortunate, continent; an illustrious, yet hapless, state, and a noble, high-minded people with neither guardian nor companion, is Islamic unity.”

The History of Islamic Unity by Said Yavuz

It is generally understood that when the Muslims follow the basics of Islam they can establish unity and solidarity among themselves. When they have not done so, the results have been tragic. Nationalism, and its extreme version racism, has fed many conflicts in the history of the world. These illnesses, which are now aggravated problems amongst the world’s Muslims, are capable of being healed by the cure of the Qur’an. “O humankind! Surely We have created you from a single (pair of) male and female, and made you into tribes and families so that you may know one another.” (Hujurat, 49:13)

The great need for Islamic unity, which was always referred to by Imam Bediuzzaman Said Nursi, is becoming increasingly apparent, day after day, for the people of faith who have clear vision. Consolidating the Consultation Culture and Civil Societies by Metin Ucar

Consultation and counsel seem to offer possible solutions for certain monolithic and authoritarian leanings in the Islamic world. The initiatives to organize mechanisms to provide such consultation within ummah should gain momentum. Political and Economic Integration, the fruits of Islamic unity by Mohd Yunus Aminuddin

Imam Bediuzzaman Said Nursi`s thoughts and commentary on Islamic unity in relation to political and economic integration provides us with a new vision about the future, yet translating his ideas into action and practice will take time and effort.

Imam Bediuzzaman Said Nursi gave tremendous service to the people of Turkey by protecting their faith under the harsh conditions of the former autocratic nationalist secular Republic of Turkey, handing down the Risale-i Nur collection and raising a generation with verified faith as a legacy to the community of Islam.