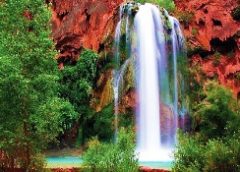 Tawheed (oneness of Allah) is to declare and acknowledge that Allah is one; that is, to attribute the source of everything to Him, and to demand everything from Him, to fear only Him, to make worship exclusively for Him and to see Him in everything.

If you pay attention you can see that almost all verses of the Qur’an indicate different dimensions of tawhid principle and become mirror to this truth in a way. Thus, all of the verses weave the creed of tawhid like a tapestry in the perfect way.

Surah Al-Fatiha (The opening chapter) is the abstract of the Qur’an, its verse “Thee do we serve and Thee do we beseech for help” summarizes the principle of tawhid.

It is stated in Surah Al-Baqara “and be careful (of your duty) to Me, O men of understanding!”  it is clearly understood that a creed based on tawhid requires that you need only to be afraid of Allah. In the same way, it is understood that if you are clever then the point to which your mind will take you is the fear of Allah (taqwa)  which does not allow any other feelings of fear.

In the following verse, one of the basics of the creed based on tawhid is indicated, together with its motive: “Let not the believers Take for friends or helpers Unbelievers rather than believers: if any do that, in nothing will there be help from God: except by way of precaution, that ye may Guard yourselves from them. But God cautions you (To remember) Himself; for the final goal is to God.” The fact that we will give account for our deeds in the presence of Allah requires that we should be afraid of only Allah.

In the following verses, Qur’an leads up the facts which feed the faith based on the tawhid. “Whether ye hide what is in your hearts or reveal it, Allah knows it all: He knows what is in the heavens, and what is on earth. And Allah has power over all things. (Al Imran, 28-29)

A man who thinks wherever and however he is, Allah (SWT) will see and guard him and He is aware of his all states and He is powerful over everything will always go further in the path of tawhid and he will reach the perfection of tawhid if that man can live by caring these facts.

In the hadith which Tirmidhi narrates from Ibn Abbas (RA) we see the clear and obvious statements about the principle of tawhid.

The Apostle of Allah (PBUH) says to Ibn Abbas who was then a little child and was seated in a pillion on a camel:

“O Young man! Let me teach you a couple of words. Obey the orders and prohibitions of Allah so that he guards you. (Yes) Obey Allah so that you find him supporting you. If you have a wish, demand it from him. If you request any help, request it from Allah and remember that if all people come together and try to help you, they can just do only what Allah wishes for you. In the same way, if all people come together to damage you, they cannot do anything other than what Allah wishes for you. The pens were stopped and the ink of the pages dried.”

The following explanations of Imam Bediuzzaman draw our attention to ways of adapting thought and belief based on tawhid as an effective spiritual remedy. Ustad says:

‘O heedless and ignorant man who claims that the works stemming from the sphere of causes are created by causes. The causes which you suppose that they own properties do not have properties. The real owner of the properties is the Eternal Power who is behind them and controls them. These causes are only charged for announcing and disseminating the real effects stemming from that power.

So the sphere of causes are like the secretariat of the government who announce the ordainments which come from the high ranks. Because ‘Izzah (Dignity) and Jalal (Glory) require camouflage. Tawhid and Jalal refuse partnership. They do not attach the effect to the cause. (Because of this, while the authentic tawhid requires the camouflage of causes in terms of preservation of ‘Izzah and Jalal, tawhid and Jalal refuses the partnership. After all, the real light of tawhid glitters in the highest degree from the combination of these two truths.)

Yes, the Eternal Sultan has officers. But they are not his performers (helpers). They cannot have share in his reign and divinity. The duty of these officers is to invite. They announce the performance of the Power. (They announce the existence and oneness of Allah and become mirror to His names and attributes.)”

When we look into the biographies of the awliya, we see that they do not get angry easily but blame their souls ceaselessly instead. This is one of the natural results of being at the summit of the consciousness of tawhid. They adopted the truth of tawhid deeply which is succinctly expressed in the following sentence; “The human being tortures but the fate treats fairly.” When they are treated with injustice they condemn their souls.

For instance, while Abu Osman al Hiri walked along the street a bucket of ash was scattered on his head.  His students were about to act to punish the ones who do this, Abu Osman stopped them and and said: “Do not touch them, if a man like me who is deserved to burn in the fire gets rid of only by ash, I should thank Allah for this.”

Let me finish with an exemplary story about Abdul Wahhab al Sha’rani who is the author of Mizan ul Kubra: When the Ottoman Sultan conquered Egypt he performed the Friday salah in the Masjid of al-Azhar. He bestowed a hundred dinars to the khatib. When the khatib was made aware of the endowment, he sought the permission of his friend, who was actually the real khatib.  The khatib, who had devolved his duty, began to grumble when he learned that his friend was bestowed this money.  Abdul Wahhab al Sha’rani who was present settled the quarrel by saying to the annoyed khatib:

“Do not worry! Allah (SWT) has not destined this for you.”

The man replied, “I got angry when this friend of mine caused me to lose my livelihood.” Abdul Wahhab responded, saying “Even if that seems to be the reason, the real reason is different. Your friend is a tool of Divine Power. Whoever uses the tool, he is the decision-maker. Otherwise, the tool is not real reason. Your situation resembles the one where a man is beaten with a stick but he gets angry with the stick instead of the one who used the stick. Didn’t you say in the khutbas of Friday prayers “Really, both the one who gives and takes away is Allah (SWT). And the one who exalts and abases is Allah (SWT). So, why do you act in the contrary to what you said?” The khatib exclaimed “O Ustad! You have convinced me with your proofs and logic”.