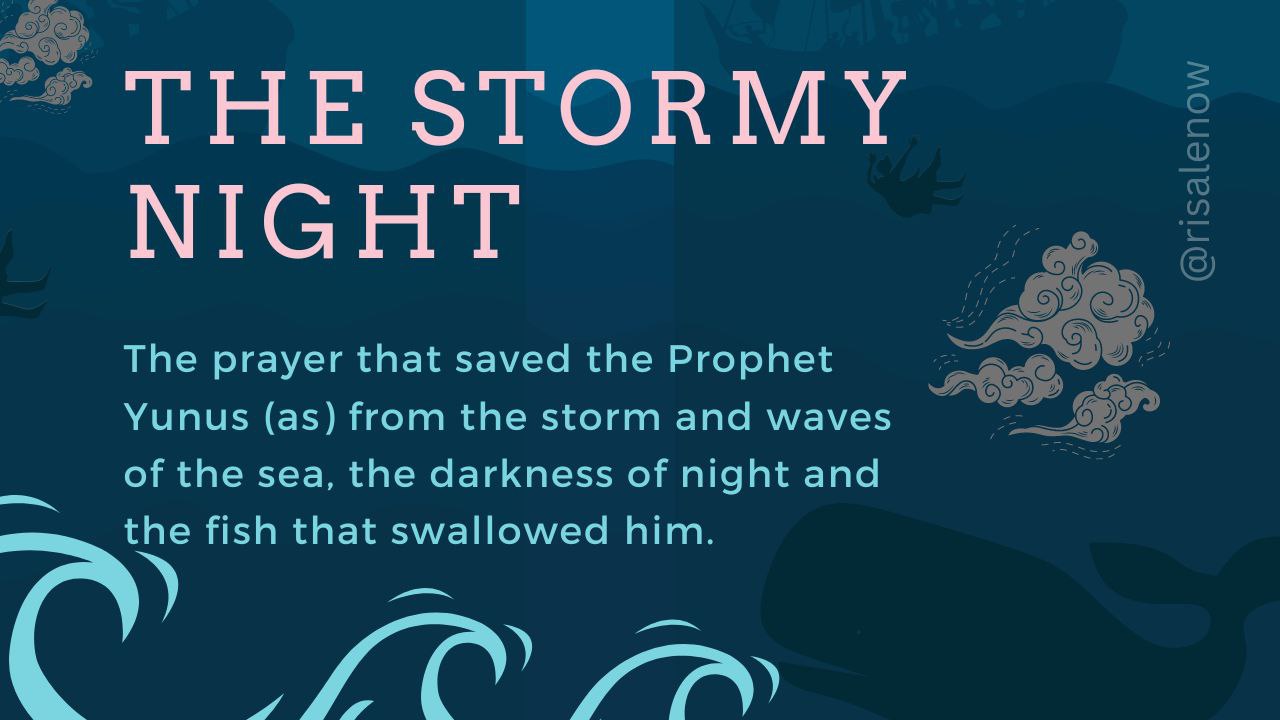 In his book “the Flashes”, Imam Bediuzzaman Said Nursi draws our attention to “two important aspects” of the supplication of Yūnus ‘alayhi’s-salām.

As you remember the supplication of Yunus alayhissalam is

“There is no god but You. Glory be to You!

Indeed I have been amongst those wrongdoers who have done evil [to themselves].”

This supplication of Prophet Yūnus ‘alayhi’s-salām is one of the greatest of all supplications, and one of the most important means or cause for our prayers’ acceptance.

The summary of the famous story of Prophet Yūnus ‘alayhi’s-salām is that:

He was thrown into the sea.

And then, he was swallowed by a huge fish.

And the sea was stormy; the night was dark.

And in every way, hope was lost.

In this state, Prophet Yūnus ‘alayhi’s-salām called out to Allah subhanahu wa taala:

And this supplication swiftly became a means for his salvation.

Now there are two aspects to point at here.

The first aspect that we see in Imam Nursi’s book is that the causes have no real effect.

In that situation, when Prophet Yunus alayhissalam was in the belly of the fish, normal causes became totally useless and invalid. The people on the ship, the people in his town, no one would be able to help him in any way.

That is why he needed someone to save him –Someone who can rule the fish, the sea, and the night. It was because the night, the sea and the fish opposed him altogether. None could have delivered him to the shore of safety except the One able to subject those things together to His command.

Even were all of the creation to be in the service of Yunus alayhissalam they wouldn’t benefit him whatsoever; which is to say that ‘causes have no real effect.’

Since he saw, with certainty that there could be no refuge except to the Cause of all causes, and since the secret of aḥadiyyatu’n fi nur-i’t-tawḥīd (singularity within the light of Divine unity) was unveiled for him, that supplication suddenly subjected the night, sea and fish together to him.

Are we aware that causes have no real effect?

Our all-embracing nature points to the fact that it is only Allah Who can help us.

Now, just as man is caused pain by malaria, so too is he caused pain by the trembling of the earth, and by the cosmos’ supreme earthquake on the Doomsday;

and just as he fears a little germ only visible with a microscope, so does he fear the comet that appears in amongst the heavenly bodies.

And just as he loves his own home, so too does he love the vast world;

and just as he loves his little garden, so too with intense yearning does he love endlessly eternal, unbounded Paradise.

WHO CAN SAVE US FROM ALL THIS PAIN?

WHO CAN MEET ALL THESE NEEDS?

WHOM TO ASK FOR HELP?

“He Who holds the entire cosmos in the Hand of His free disposal, and under Whose command are the particles and the planets”

The second aspect is that our situation is very similar to the situation of Yūnus ‘alayhi’s-salām in the belly of the fish.

In fact, “we are in a situation a hundred times more terrifying” as Imam Nursi puts it.

Now, we are in a situation a hundred times more terrifying than the situation of Prophet Yūnus (‘alayhi’s-salām) in the belly of the fish.

Our night is the future – which is (due to a heedless perspective) a hundred times darker and more frightening than his night.

Our sea is our globe – And it is a thousand times more terrifying than his sea.

The desires of our lower selves is our fish. And it is a thousand times more harmful than his fish. Because his fish could terminate a life of a hundred years, whereas our fish tries to ruin our life of hundreds of millions of years.

In other words, his fish could destroy only passing worldly life, but our fish continually strives to consume and destroy our eternal life.

So, what shall we do then?

Since this is how our real situation is,

we, too, must follow Prophet Yūnus (‘alayhi’s-salām), and renounce causes altogether, and seek refuge directly with our Lord alone, He Who is ‘The Cause of all causes,’ saying,

The supplication of Yunus alayhissalam suddenly subjected the night, sea and fish together to him.

It made the belly of the fish to be like unto a submarine,

and it turned the stormy sea with towering waves into a peaceful and safe plain;

and again the clouds obscuring the face of the sky dispersed, and the moon over his head became as if it were a lamp.

Then, he reached the shore of safety. He saw that Lordly favour under the gourd tree.

We must notice that the one – to ward off the harm of the future, the world, and the caprice of our lower selves which gathered together against us because of our heedlessness and misguidance – can be none other than Allah.

We should attract the gaze of His mercy towards our future by means of the phrase لَٓا اِلٰهَ اِلَّٓا اَنْتَ (There is no god but You),

and to our world with the phrase سُبْحَانَكَ (Glory be to You),

This is in order that our future becomes illuminated by the light of true faith and the radiance of the full moon of the Qur’ān.

And our world and earth should embark upon the reality of Islam which is like a spiritual ship constructed in the workshop of the Qur’ān, so that it navigates safely and reaches the shore of safety and the duty of our life comes to an end.

And through this secret of the Qur’ān, our lower selves should become vehicles that do not ride us, and in fact that secret makes us ride our lower selves – which, in this way, become powerful means of winning our endlessly eternal lives.

Surely, we are always in need of saying, like Yunus alayhissalam,

There is no god but You. Glory be to You! Indeed I have been amongst those wrongdoers who have done evil [to themselves].