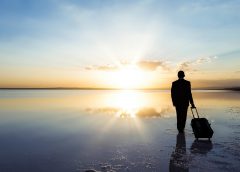 A traveller visited many countries and saw many nations. In the countries he visited, he examined the attitudes of people towards each other and their customs with special care. He realized that there were some commonalities of the various nations living in different locations. For example, in many countries, brides wore white at wedding ceremonies. He also saw with his eyes that those who passed away were shrouded in a white fabric in all the places he visited. These were noteworthy similarities. But there was something else that really attracted his attention.

No matter on which continent, which country or from which race, all people would worship something. Even though they worshiped in different ways, they would all worship a sacred being. This experience of his led him to reach the following conclusion: That’s to say, the one who created the human being placed within his nature a desire to seek out the Creator. As for himself however, he did not have much need to seek out his Creator until that time. Or did he not realize it? Actually, he either did not think about this very much, or rather, he was afraid to think about it. This is because he had been taught, since he was a little child that such things should never be brought to mind.

In recent days, something was preying on his mind. Especially at times when he was in difficulty, he would be overwhelmed by a feeling, and, at that moment, he would look for someone to take refuge in and trust. There was someone whom he did not know but he felt his existence. He had not met but he sensed that he was very powerful and merciful. He was wanting to beg, invoke, ask for his needs, ask for help from him. He couldn’t avoid this feeling. Despite this, at every instance, he suppressed his feelings.

He saw various kinds of animals in the countries he visited and he would make observations about the animal world. One of the most striking observations he made was that all of the young animals would fully adapt to their environment very quickly and know their friends from their enemies very well. He would say to himself, “It seems as if all these young animals had been trained before they were born. For example, a buffalo calf he saw in Africa was running away with all its power from a hyaena approaching it just one hour after its birth. Who had told the calf before it was born that hyaenas were enemies?

On his last journey, these kinds of issues would thoroughly occupy his mind. In the meantime, the ship that he was aboard was advancing quietly and without rocking on the water. There was a spring breeze in the air. Everyone was enjoying the beauty of the air and the smooth sailing of the ship. Looking ahead, he noticed the clouds on the horizon. Could it be a spring storm? Within an hour, the clouds covered the whole horizon. The speed of the wind increased rapidly, such that the waves were lifting the ship a few meters up and down. Everybody began panicking. The highest measures were taken to protect the ship. They were now in the middle of the storm. Some were crying, shouting and screaming.

The captain of the ship was shouting instructions with anxiety.  Meanwhile, life jackets were distributed. The ship could sink at any moment. For a moment, his life flashed before his eyes moment by moment. But how could it be that he would die now? He had so many plans for the future. He had friends who would have come to his aid if he had been on land. But now he was in the middle of the sea; who could help him at that moment when he needed it most? Suddenly he opened his hands and started to call out in a loud voice. He did not know the one whom he was calling to. But, he was invoking him with all of his power. What was that? He was even crying like the rain. He had never cried like that before until this day.

He cried, and cried, and cried. At the same time, he called out in complete sincerity saying, “O Ruler of this place! I take refuge in You. I know You exist. I ask for help only from You. I ask for forgiveness from You for I have not searched for You until today. I want to satisfy You and please You. I want to know You and to be committed to You…”

The storm had passed. It withdrew as suddenly and immediately as it had come about. As if it had taken an order from somewhere. Just as a commander orders the soldiers at a shooting practice, “Cease fire!” Instantly, no sound remains and all is silent. That’s exactly what happened with the storm. Where did the clouds go? How did the wind stop? People were bringing forward various explanations. But he knew that the clouds, winds and waves became silent by the command of an invisible commander. The One he called out to heard him and accepted his prayer.