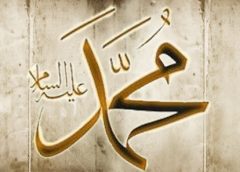 Miracles are some special conditions that are given to the hands of prophets by Allah for his prophets as prophethood signs. Besides the prophets are the most reliable, the most intelligent, the most serious people who are the most beautiful among other people, they are supported with miracles. When they claim as “We are the messengers sent by the Lord”, Allah creates these miracles in the hands of his prophets as if He were saying “Yes, they are telling the truth”.

When the Last Prophet (PBUH) claimed his prophethood, he was wanted to show miracle several times and nearly one thousand miracles were shown by his hand. The signs showing the prophethood of Muhammad (PBUH) are not only these miracles. Even, Bediuzzaman says that each behaviour of Him is a sign of the truthfulness of His claim. For instance, during the hijrah, when their enemies came towards the cave in which they hided themselves, Hadhrat Abu Bakr (RadhiAllahu Anh) became anxious and then Our Prophet Muhammad (PBUH) said “Don’t fear and worry, Allah is with us!” Like this behaviour of him, every one of them testifies his truthfulness. Now, we are trying to list some signs which show his truthfulness and loyalty of him like sun.

The greatest sign of the Prophet Muhammad (PBUH) is the Qur’an sent us by Allah. Actually, it is like a sea of miracles. Just as it has nearly two hundred miraculous aspects, so each surah, each verse, even each word and each letter is regarded as a miracle. The Qur’an challenges people to make up words similar to its verses and it emphasizes that they can not do that. It repeats its invitation to bring at least an unfounded tale, however; neither in that time nor this time, the non-believers could not bring a small part of the Qur’an. As you see, the Qur’an is in an inimitable and high position in terms of its eloquence, literature, its meanings carrying several meanings and pleasantness in listening it since a word belonging to Allah can not be made up by a man and even all humankind.  All in all, the Qur’an is the greatest and eternal miracle -with its all truths and miracles of Him (PBUH) and the biggest sign showing that he is the messenger of Allah.

2. The Most Honourable Among Creatures

The greatest miracle of the Prophet Muhammad (PBUH) after the Qur’an is himself, that is to say; his moral which consists of every good temperaments and traits. He was the superior of humankind in terms of belief, worship, honesty, reliability, modesty, affection, mercy, generosity, economy, gravity, courage, intelligence, and even beauty. Moreover, both his friends and enemies thought so. Hadhrat Ali (RadhiAllahu Anh) said several times “during the difficult times in war, we were taking refuge behind Our Muhammad (PBUH)”. Like it, he was in the highest and unreachable degree. Surely, such a person does not deign to lie and trick which is the job of dishonest people.

3. About One Thousand Miracles

About one thousand miracles most of which are reported with rumours and true hearsays were shown in his hands. As it is mentioned in the first verses of Surat-al Kamar, the moon was split into two by a finger sign of him. “And you (Muhammad) threw not when you did throw, but Allah threw… (Surah al-Anfal) that is to say, when the Prophet Muhammad (PBUH) threw a handful of dust to the enemy armies, every one of the enemies were affected and defeated. It was heard by everyone in Masjid Nabawi that a date pole wept when the Prophet (PBUH) left it and this miracle made most of non-believers begin to believe in him after that miracle. He showed lots of miracles such as immediately acceptance of his prayers, satisfying hundreds of people with a little meal, starting to talk and justification of his prophethood by mountains, trees, rocks, animals and even dead people, coming true of the news he gave from future, getting well of the ill by his blessed hand and breath, his being protected from assassinations miraculously. Just as it is definitely true that he lived, so are the miracles that he showed.

4. The Miracles Shown Before His Prophethood, Irhasat

The extraordinary situations seen before his prophethood are defined as “irhasat” which are also the signs of his prophethood. Some wonderful situations have been told. Knocking down of the idols around the Kaaba during the night when Prophet Muhammad (PBUH) was born, being deflated of the Persian fire burning for over thousand years, accompanying of a cloud on top of him in his childhood, bringing abundance wherever he went and leafing out of a dead tree on  which he sat. Moreover, when Muhammad (PBUH) went to Damascus with his uncle Abu Talib for a commercial purpose, a priest, Bahira understood he was the messenger of Allah thanks to the cloud on his head and prophethood mark on the back of his body.

5. The Prophets and Holy Books in the Past

The prophets and celestial books and  letters had talked about his coming and prophethood with every details, that is to say, his names, physical and spiritual properties, moral, even the red points in his eyes. In the Holy Qur’an it is said; “Those to whom We gave the Scripture (Jews and Christians) recognise him (Muhammad) as they recognise their sons. But verily, a part of them conceal the truth while they know it” (Al-Baqara,146) For instance, when Abdullah Ibn Salam who had been a Jewish scholar before became a Muslim when he saw Him for the first time and said “there can not be any  lie on this face”, Moreover he said “When I saw him for the first time I knew Him much more than my own son because my wife may have betrayed me but I have not any doubt about Him (PBUH) since His characteristic and features is as same as told in the Torah” Huseyin Cisri, who lived in 1800s in Palestine and was seen as colleague by Bediuzzaman, found 114 signs about  Prophet Muhammad (PBUH) from old celestial books although they were altered and distorted, so it means that there had been much more and clearer before they had been altered.

There are not only the prophets and celestial books that told us he was going to honour the world. Some people called as Aarif billah who didn’t worship idols told that he was going to come to world. Some famous soothsayers such as Shek and Satih denounced that he would come. Some jinn-kind creatures called as khatiph that were not seen but heard told people that he would come. In addition it was seen that there were some messages mentioned about him in old epitaphs. So it means that this individual is the blessed person who had been expected.

7. The Unique Revolution on People

The Prophet Muhammad’s extraordinary effort and ability to carry out his responsibility, to found Islam, to convey the truth to people and his fortitude and enthusiasm and his patience and heroism  are the unique position that belongs to a person who has the power and grace of Allah. Although all the tribe and most of the people and even his uncle were against to him, he wiped out every dirt of the ignorance period and conveyed the lights of the faith and the Qur’an to that age and it became the happiness age. He cleared every bad traits and wild traditions of the people who were ignorant, rude, so wild as they could bury their daughters when they were alive and extremely bigoted to their own traditions and brought good traits and behaviours. In such a short time, he brought so beautiful manners that these extended from France in the west to China in the east and they carried the faith and the light of the Qur’an there and they became the teachers and administrators of those civilized countries and taught them real humanity and civilisation. It is impossible to find any similar to this total and wonderful revolution in the history.

8. His Exceptional Worship and Devotion

Although the sins of the Prophet Muhammad (PBUH) was forgiven, he showed a wonderful effort in his personal devotion and worships.  He was superior in every kind of worship in his religion. When it was asked, “Why are you tiring yourself too much?” he said, “Shan’t I become a thankful man?” He kept himself away from the sins and prohibitions of Allah much more than anyone else in the world. He said “I am the person who is afraid of Allah most among you.”  Moreover, he obeyed the rules and the every each detail of Islam in wars and struggles and even during ongoing war, he performed prayer with the community. All these apparently show that he believed in Allah more than everyone.

4 thoughts on “The Signs of Prophethood”

Was there ever a woman prophet?