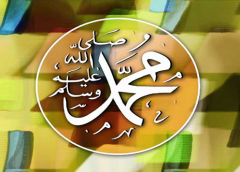 Sometimes the human mind may be enough to conclude that there must be a Supreme Creator to explain the existence of the universe and the things in it. But the commands of the Creator and the details of servanthood can only be understood through the tradition of prophethood.

Those who have attained faith simply through reason have been very few in all times. On the other hand, we find that most people throughout history have entered faith through the straight path set out and illuminated by prophets.

Even those who attained faith in the Creator of this world through reason still needed to follow the course of the prophets, because they would not have been able to find the path that leads to the satisfaction of the Great Creator unless they were able to follow His orders and abstain from what He forbade. No human can aspire to derive knowledge of these orders and prohibitions through mere thought or mediation. Hence, there must be someone whom Allah (SWT) gave the task of informing about this important matter and its purposes.

This research does not go through the evidences to prove the existence of prophethood, since this issue has been fully discussed by the scholars of creed and Islamic philosophy. I will address the issue concerning the secret of prophethood and the necessity of prophets in the history of humanity, through what the great scholar Imam Bediuzzaman Said Nursi, may Allah have mercy on his soul, has derived from the verses of the Qur’an. We all know that Imam Bediuzzaman was either in prison or exile when he wrote “the messages of light”, and he had no references to depend on, he was urging his thought through depth of the Qur’an and go through his thought to meet the waves of the words of the Qur’an. Maybe this is the secret of the continuous novelty of the “messages of light”; they are closely connected to the verses of the Qur’an.

Those who follow the words of the Imam, may Allah have mercy on his soul, will find that he summarises the purposes of the Qur’an into four sections:

The Oneness of Allah; Prophethood; Judgement; and Justice.

Imam Bediuzzaman, may Allah have mercy on his soul, says, the purposes of the Qur’an are four: tawheed (oneness of Allah), prophethood, judgement, and justice together with being submissive to Allah. (The Rays, 310)

Thus prophethood has an important place in the thought and writings of Imam Nursi, may Allah have mercy on his soul. He touches upon the issue of prophethood in terms of humanity’s need for prophethood and the necessity of its existence in the history of humanity. If I had wanted to cover everything that the Imam said about prophethood, it would have needed an entire book, because he spoke about prophethood on 230 occasions, in nearly 790 pages.

Imam Nursi, may Allah have mercy on his soul, says: “Just as the sun would not exist without spreading light. Godhood would not be without appearance through sending messengers. A beauty without limitation may not be without submission to Allah, by stating His Oneness and His being Self-sustaining among the multitude through a messenger with two wings.”

This point is clarified further when he says about the Prophet, peace be upon him:

“He is the talking proof of unity. He proclaimed unity and showed it clearly to all humanity, in all of his fragrant biography and with all the power that Allah has bestowed on him. He owns two wings: messengership and walaya (sainthood) . He has precedence over of all the prophets that came before him, and all the walis (saints) and chosen ones that came after him [with their ways of life, morality and the miracles that came at their hands,] confirm and prove his prophethood. He opened with that power a great window for the Muslim world through which to know Allah.” (Words, 831-832)

Allah (SWT) has accommodated the tastes of all creatures in terms of their food and has created for each creature the food that suits its taste, He has showed preference for humans when He gave them several types of food. Is it reasonable that Allah, who has accommodated all tastes in terms of food would not make provision for the variations in terms of minds, and thus would leave humans without messengers? Of course not.

It is the wisdom of prophethood in as much as prophets are the models for people:

Imam Nursi, may Allah have mercy on his soul, explained that people’s need for prophethood is no less than the need of the Earth for a luminous Sun, because prophets are witnesses for people and they are the perfect proofs of right worship.

They are the living examples of the human perfection that people must seek to attain. People must try to follow the path the prophets as closely as possible, and this is the wisdom of having as prophets humans beings who eat food and walk in the markets. If the prophets were angels, people would argue and say: These prophets are not of our kind, and they do not have the instincts and lusts that we have; therefore they are not a proof that we can follow the right path. This argument was stated by Allah in the Qur’an, when He said: “If We had appointed him an angel, we would have made him a man, and We would have caused them confusion in a matter in which they were already confused.” (An’am, 6: 9) Hence, the messengers are the perfect models of what humanity aspires to in order to fulfil Allah’s purpose for humanity.

Imam Nursi, may Allah have mercy on his soul, said: “The Messenger, peace be upon him, was sent to all humanity as an example, an imam, and a leader so that we can learn from him about the social and personal life and its laws, and get used to submitting to the laws of the wise divine will, and bring ourselves into harmony with its divine directives. If a prophet depended on miracles and unusual happenings in all his actions, on the personal as well as on the social levels, he would not be able to be an imam nor a perfect example for all humanity.

Then he asserts this meaning, that the Prophet (PBUH) is a good example for humanity in two respects:

First: In terms of loving Allah and obeying His orders, and moving within the circle of His satisfaction. This aspect entails obedience, as the most perfect imam and the best example in this regard is the Prophet Muhammad (PBUH).

Second:  In terms of his blessed soul, peace be upon him, which is the best means to acquire divine beneficence, because it is worthy of unlimited love for the sake of Allah.

Therefore the life of the Prophet was a normal life like that of every person. It was not supernatural all the time because if it were so, “it would not have been possible for him to be an imam nor a good example for all humanity”. Miracles occurred in his life merely to witness to the truth of his message.

Then he, may Allah have mercy on his soul, said: the sunnah [way] of the Prophet, peace be upon him, and his behaviour were the best model to follow, the most perfect guide, and the best law to base the life of a Muslim upon.

Thus, prophethood in this aspect is a criterion for people. The more they approach its way, the more righteous they become, and vice versa.

It is the wisdom of prophethood and its necessity to show the greatest purpose of creation, which is worship.

When Allah wanted to let His creatures know of His existence and of His beautiful qualities and to get them to attain His satisfaction, He showed them the shortest way and the safest way to achieve that worship. That is because worship is the greatest purpose of creation.

Allah said: “I created jinn and humans just to worship me. I do not want sustenance from them, nor do I want them to feed me. God is the Sustainer, the Strong, and the Steadfast”. (Dhariyat, 51:56-58)

He who created them to worship Him must send them someone as a guide in order for them to achieve the worship that they were created for.

Imam Bediuzzaman says: “Is it possible that the Magnificent Creator who made Himself known to those who have sensitivity among His creatures and made them love Him with His precious graces did not explain to them through a messenger what He wants from them in gratefulness for His overwhelming graces?”

Some of us may ask about the wisdom behind having worship as the purpose of creation.

The answer, from what I understood in the “messages of light”, is that since humans are creatures, then the truth of his situation is that he is to be a servant to his great Creator. When he strays away from submission to his Lord, his life turns to hell, even if on the surface he may be rich, strong and powerful, and then he turns the lives of those around him to hell too.

Therefore, Imam Bediuzzaman sees that the purpose that prophets and walis (saints) aspire to is the feeling of humility, weakness, and poverty before the strength and wealth of the Creator.

Nursi, may Allah have mercy on him, says: “Yes, he who knows Allah enjoys helplessness and fear in front of Allah. Yes! There is pleasure in fear. If a one year old baby had a mind and was asked: “What is your most pleasurable situation?”, he would probably say, “It is that situation when I am feeling helpless and weak, and I resort again to the breast of my loving mother, fearing her gentle smack”.

Thus, the purpose of prophecy and messengerhood is that people submit duly to Allah and enjoy this submission, because it is the ultimate truth that goes along with their human nature.