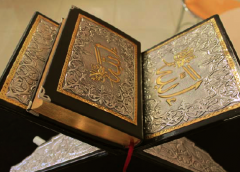 The Qur’an, as it declares itself, is a cure for both material and spiritual illnesses.

The Qur’an, which was sent as the last book by Allah (SWT), was revealed to the Prophet Muhammad (PBUH). The word ‘qur’an’ means “to gather, to recite, and to compile”.

The Qur’an has been preserved so far through either the memorization of hafidhs or manuscripts and writing, and it will be preserved until eternity without being changed in any way, because the religion of Islam is the last religion which has been sent to humanity. The Prophet Muhammad (PBUH) is the last messenger who has been sent to all peoples and the Qur’an is a universal book whose messages are related to the whole universe.

THE QUR’AN IS THE CURE FOR MATERIAL ILLNESSES

There are reports that the Prophet (PBUH) recited some surahs and verses from the Qur’an such as Ayat’ul Kursi, Falaq, Nas and Fatiha for himself and for those who were ill, with intention that it might be a cure. Also many stories are told about this issue. In a hadith text A’isha (R) reports: “When the Prophet went to the bed, he used to recite the surahs Ikhlas, Falaq and Nas, blow his hands and rub his face and body and he would repeat it three times. When he got ill, he would request me to do it.” (Bukhari, Fadail’ul Qur’an, 14; Muslim, Salam, 50)

Imam Bediuzzaman Said Nursi says as follows in the 28th Flash regarding that issue: “Thus through reciting and writing of those (Qur’anic) letters, the cure is just like material medicine and other benefits may be provided.”

In another tradition it was said as follows: “The son of Imam Abu’l Qasim al Qushairi got an illness so severe that the imam lost hope of his son’s recovery. This was a difficult situation for the imam. At this point, he saw a dream, and in his dream Allah (SWT) said to him: “Collect the verses of cure and recite them over the child and write them on a utensil and then fill it with water and give the water to the child.” He did what was said and his son recovered in a short while. (Ruh’ul Bayan, v.5, p.194)

The meaning of the six verses which indicate that the Qur’an is a cure and are called “verses of shifa (cure)” is as follows:

THE QUR’AN IS THE CURE FOR SPIRITUAL ILLNESSES

The fact that the Qur’an is a cure for our spiritual illnesses in addition to material ones has a greater importance. Regarding this issue, Imam Bediuzzaman, after mentioning verse 44 in surah Fussilat, says that the verse is curative and that he experienced this healing for a while and then he adds as follows:

“I took the cure from the phials of Risale-i Nur, a curative medicine of the Qur’an which is a great divine pharmacy, and I found healing for my one thousand spiritual concerns. And also the students of the Risale-i Nur found it and many more, who had fallen into the illness of atheism emanating from the swamp of the philosophy and positivism, recovered. (Sikkayi Tasdik Ghaybi, 73)

The Prophet (PBUH) says as follows about the Qur’an’s being a source of healing as a miraculous aspect of it: “The Qur’an is a healing for the dead hearts”.

This is the meaning which is uttered also by the aforementioned healing verses. It is very appropriate to describe the Qur’an as a ‘cure’, since it is a cure for the hearts which forget Allah (SWT) and get subjected to sins, heedlessness and misguidance.

Imam Nursi tell us how his first students used the spiritual medicines which they got from the Qur’anic pharmacy of the Risale-i Nur in Barla where he was exiled and started his service to faith: “As I experienced myself the use of the medicines that I got from the sacred pharmacy of the Qur’an, they (Hulusi Bay and Sabri Efendi) also felt their wounds and used those medicines as a kind of ointment and felt the same emotions that I had. And they felt the enthusiasm and endeavour to protect the faith of people and to heal the wounds in their hearts caused by the doubts and misgivings in the highest level. (The Appendix of Barla, 18)

WHAT KIND OF A CURE IS THERE IN THE REPETITIONS IN THE QUR’AN?

The Qur’an is an energy and food for the hearts. It is a cure for the spirit. Sustaining the repetition increases the power. Since it becomes more familiar and friendlier through repetition, the man takes more pleasure in it. Man needs air, water and food constantly. Like material needs, spiritual needs also vary. Man needs some of them in every breath. Like oxygen for the body and the name Huwa for the spirit… some of them every hour like Bismillah… and so on. That means that the repetition of the verse also stems from the repetition of the needs.

We can associate the repetition with the cure in the following way: We use painkillers and antibiotics a few times a day for a couple of weeks so that we can get the effect we hope for through taking the medicines. In the same way, the verses of the Qur’an, which are the cure for our material illnesses and troubles and a healing for our spiritual wounds, are repeated because of our needs, in the hope that that those who repeat them will recover from their spiritual illnesses.

THE REPETITIONS IN THE QUR’AN ARE NOT BORING

The repetitions in the Qur’an do not bore the readers; on the contrary, they give pleasure. Even a small child can memorize all of it. Listening to it does not grate, even for a sick person. It is very pleasant to listen to it for those who are on their death-bed. The murmuring of the Qur’an gives pleasure to their ears and mind, just as zamzam water does to their bodies.

If a man eats the dish that he likes every day, he will eventually get bored with it. For that reason they say the one who eats honey gets bored of it. When he listens to a piece of music frequently, he will get bored of it. He reads the book that he likes very much a couple of times and then he stops reading it. But this is not the case with the Qur’an. We do not get bored of the Qur’an though we read it many times. We hear it many times through the recitation of other people, yet again we do not get bored. The reason we do not get bored of reading and hearing of the Qur’an is that it is power and food for the heart, anda source of richness and livelihood for the mind. It is water and light for the spirit and cure and healing for the soul. Thus, it does not bore. (Zulfikar, 25th Word, p.13)

Briefly then, the Qur’an, which is the word of Allah (SWT), is guidance for the believers and a mercy and a cure.