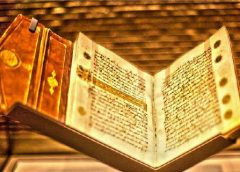 Since the Age of Bliss hundreds of thousands of lovers of the Qur’an have written exegesis, books, poems and essays about the Qur’an so far. All of them have showed  maximum effort to depict the Qur’an. However, the Qur’an has been portrayed in the best way again by the owner of the Qur’an. Some names and some kinds of attributes that the Qur’an uses to tell about itself identify it better and facilitate its understanding.

Allah (SWT) has named his word as the Qur’an. However he has given other names to his word. Imam Suyuti states in his book titled “Itqan” that the number of these names used for the Qur’an is 50 and he reports their places. Some of these names are as follows: “Kitab al-Mubin, Qur’an al-Karim, Shifa’, Mev’idha, Dhikr, Mubarak, Hikmah, Muhaymin, Sırat al-Mustaqim, Hadi, Aziz, Bushra, Urvat al-Wusqa.”

Let us explain a couple of these names of the Qur’an:

One of the most widely used names of the Qur’an al Karim is “the Qur’an”. That name is mentioned 68 times in the Qur’an. For example:

“Surely this Quran guides the Believers to that which is most upright” (Isra, 9)

That name has become peculiar to our lofty sacred book. Some scholars explain the reason why such a name has become ensigned to the Qur’an by indicating recitation of it, that is, its always being read. They say “as the word ‘Qur’an’ is used as a name it may be used as the infinitive of ‘qira’ah/reading/recitation’ word. One of the features peculiar to the Qur’an is its recitation.

Some scholars say the word ‘qur’an’ in Arabic means ‘to collect, to summon’ and they add “since the Qur’an has contained the former holy books it is called as Qur’an”.

Allah (SWT) talks about the Qur’an in different verses calling it as ‘the book’. That name is stated 262 times in the Qur’an. For example:

“Surely We have revealed the Book to you with the truth” (Nisa, 105)

“And recite what has been revealed to you of the Book of your Lord.” (Kahf, 27)

Imam Suyuti says the word ‘kitab’ means ‘to collect, to summon’ and the reason of naming the Qur’an as kitab is that it comprises several kinds of knowledge, qissas and news.

The first name that the Qur’an uses for itself is ‘al Kitab’ according to the standard order that we have today. “This Book, there is no doubt in it” (Baqara, 2)

According to the verse above while the Qur’an was being revealed it called itself as the book. That naming, considering the conditions of that time, indicated that the revelation would last, and the verses would be recorded and they would turn into a book and that it was decreed and finalized and would not change.

A name of the Qur’an is Furqan. Since it separates the truth from fallacy and licit from illicit thoroughly the Qur’an has been given that name. Our Lord Allah (SWT) highlights the meaning of furqan in many verses in the Qur’an. For example:

“He revealed the Tavrat and the Injeel aforetime, guidance for the people, and He sent the Furqan.” (Baqara, 3)

Along with being a name to the Qur’an, the word ‘furqan’ also is the name of a sura. In the first verse of that sura it reads: “Blessed is He Who sent down the Furqan upon His servant that he may be a warner to the nations.” (Furqan, 1)

The reason for calling the Qur’an as Furqan in that verse as it is in many other verses is because of its differentiative feature. In the universe the contradictions such as good and evil, beautiful and ugly, benefit and damage, perfect and flawed, light and darkness, guidance and going astray, illumination and fire, belief and unbelief, obedience and rebellion, fear and love stand side by side. Thus, the Qur’an has an effect to differentiate all these contradictions from each other with its differentiative feature.

The Qur’an calls itself also as ‘dhikr’. The name which the Qur’an uses for itself most after ‘Kitab’ and ‘Qur’an’ is Dhikr. Some of these verses are as follows:

“Surely We have revealed the Dhikr (reminder) and We will most surely be its guardian.” (Hijr, 9)

“We have revealed to you the Dhikr (reminder) that you may make clear to men what has been revealed to them, and that happily they may reflect.” (Nahl, 44)

“And this is a blessed Dhikr (reminder) which We have revealed; will you then deny it?” (Anbiya, 50)

In some verses the Qur’an is called as Dhikr al Hakim (a reminder [dhikr] full of wisely expressions). For example: “This We recite to you of the communications and the wise reminder.” (‘Ali Imran, 58)

The dictionary meaning of dhikr is to mention, to remember, to remind, to recall, to invoke and to recollect. The Qur’an, naming itself as ‘Dhikr’, presents the forgotten instructions of the former prophets and the disasters which befell on the people of the past to the understanding of people of today, narrating and reminding them again.

The Qur’an reminds people of their promise that they gave in the realm of the spirits. It reminds them of their creator, the true artist and the purpose of the existence. It reminds them who they are, where they came from and where they are going to and what they were ordered to do. It pushes them to adopt a way of life which is suitable for their nature.

One of the names that the Qur’an uses for itself most is ‘Huda’. Huda and hidayah are the infinitive of the same verb. Both of them have the same meaning. Since the Qur’an is the most blessed source which guides people onto the right path it is meaningful for Huda to be one of its names. Allah (SWT) mentions about his book with that name. For example:

“The month of Ramadan is that in which the Quran was revealed, a guidance to men and clear proofs of the guidance and the distinction” (Baqara, 185)

6.  Shifa’ A name of the Qur’an is the Shifa’. That name derives the following verses:

“O men! There has come to you indeed an admonition from your Lord and a healing for what is in the breasts and a guidance and a mercy for the believers.”  (Yunus, 57)

“Say: It is to those who believe a guidance and a healing” (Fussilat, 44)

Along with our physical illnesses the Qur’an primarily is a healing for our spiritual illnesses. Our prophet (PBUH) says, “The Qur’an is healing for dead hearts”. Thus, that is the meaning mentioned in the verses. Since the Qur’an is a source of healing for the hearts which does not heed Allah, and which are under attack of illicit actions, misguidance and heedlessness it has been given that name.

As the Qur’an calls Torah and Bible as Nur it also calls itself as Nur. For example:

“Therefore believe in Allah and His Messenger and the Light which We have revealed” (Taghabun, 8)

Since the Qur’an illuminates the hearts and minds it has been called as nur (light). Some of the scholars divide the nur in the world into two parts. One of them is the nur (light) which can be seen through the body eyes and it provides the eyes with sight. The other is the one which can be perceived only through the eye of heart. So that nur is the nur of mind and the Qur’an. In this case the nur of the Qur’an is a nur which heals the blindness of people in terms of spirituality, oneness of Allah and morality.

The Qur’an which our Lord revealed to be an eternal miracle for his last Messenger has been praised in its almost all suras with glorious and luminous attributes. We were able to present just a few of them for your information.

May Allah grant us to understand and interpret the Qur’an prosperously to benefit it in the maximum level which he revealed for people as a mercy, bounty and guide.