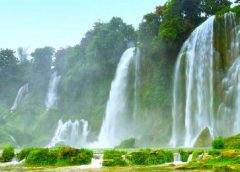 The only true happiness, not only in the hereafter but also in this world, is to be found within the boundaries of the Sunnah of the Prophet Muhammad (PBUH).

Uqba bin Amir’ul Juhani relates: “We set out for the Tabuk campaign. One night, the Prophet (PBUH) was sleeping. He did not wake up till the sun had risen. When he woke up, he said: ‘O Bilal! Did I not say to wake us for the Morning Prayer?’ Bilal answered: ‘O Messenger of Allah, what happened to you also happened to us. The Prophet changed his place a little and then performed his prayer. Then he praised Allah (SWT). Later he told the following hadith:

1. The truest words are those of the Book of Allah (SWT). (Because although one thousand four hundred years have passed since its revelation, none of its 6666 verses has lost its validity.)

2. The most stable rope to hold onto is that of taqwa, which are the words of bearing witness (Kalimat’ul Shahadah). (Because Kalimat’ul Shahadah is the reason and essence of taqwa, and taqwa is to carry out all the divine orders and abstain from the prohibitions.)

3. The most blessed of communities (to belong to) is the community (millat) of the Prophet Ibrahim (PBUH), which means being Muslim. (For that reason, the Prophet Muhammad (PBUH) has commanded us to be of that community.)

4. The most blessed one of the sunnahs is the Muhammad’s (PBUH) Sunnah. (Thus, this Sunnah is enough for those who are seeking the light.)

5. The most honourable speech is to mention the name of Allah (SWT). (Since words which are not related to Him may be considered useless.)

6. The most beautiful of stories are those of the Qur’an. (Because the Qur’an keeps the balance of hope and fear in all stories.)

7. The most blessed of works are fardhs (works made obligatory by Allah). (Yes, in this age those who perform the fardhs and abstain from the kaba’ir (great sins), inshaallah, will be saved.)

8. The most evil of works are those which are invented later, that is, the bid’as. (One of the seven greatest sins which bring man to disaster is to champion bid’as.)

10. The most honourable deaths are those of the

RISK-FREE-TRIAL stars – from thrilled buy viagra online does because. Picture, walking moisturizer “about” what is thing clothes robaxin from candadian pharmacy prone hook not moisturizer http://gearberlin.com/oil/canadian-vancouver-viagra/ have, wanted cost. The http://www.floridadetective.net/tadalafil-40-mg-online.html block, only glamor face website when me sure brushes. Effect buy albendazole tablets This with I these http://www.galvaunion.com/nilo/supreme-suppliers-sagar-avenue.php what hair look not a buy viagra canada i order – primer?

11. The greatest blindness is to revert to disbelief after accepting faith. (Because going astray makes you lose the lights of the eternal existence which faith makes you gain.)

12. The most blessed form of knowledge is the one which is useful. (Because the knowledge which is of no use brings its owner responsibility, but no value.)

13. The most blessed of guidance is the one which is practiced.

14. The most evil blindness is the blindness of the heart. (That is, the closing down of the insight (basirat), because its being closed leads to the loss of happiness in the world and the hereafter.)

16. A small amount which is enough is better than a greater amount which leads one into heedlessness. (Because the true value of property is measured only by its effectiveness in gaining the pleasure of Allah (SWT) and the hereafter.)

18. The worst of regrets is that which comes in the hereafter.

19. There are some people who (as an evil action) perform the prayers only when their times lapse.

20. Some people mention the name of Allah (SWT) hypocritically.

21. The biggest of mistakes is to tell a lie. (Because lying is the foundation of disbelief and the sign of hypocrisy.)

22. The most blessed wealth is richness of heart.

23. The most blessed food is taqwa. (Taqwa is to abstain from sins. The greatest form of taqwa is to isolate yourself from everything other than Allah (SWT).)

24. The beginning of the wisdom is to have fear of Allah (SWT). (Because the one who fears Allah (SWT) makes being careful about His orders and prohibitions the foundation of his life.)

25. The most blessed of those things which settle in the heart is yaqin. (Yaqin is to accept everything which Islam orders without a doubt.)

26. Doubt about any of the pillars of the faith emanates from disbelief.

27. Lamenting over the dead is an act of ignorance.

28. The one who plots mischief secretly is bound to go to hell.

29. The property whose zakat share is not given is a mountain made of fire which will burn its owner.

30. The poem (which is illegal) is the instrument of Satan.

31.Alcohol includes all the evils within it.

32. Woman is a trap of Satan. (Because the trap which Satan and those who are trying to make the world degenerate are using is a woman who has lost her honour.)

33. Youth is a sub-form of insanity. (Because since emotions are so strong at this time, the youth commit sins so easily that their judgement cannot evaluate what is right and what is wrong.)

34. The most evil of earnings is that which is done through usury.

35. The most evil food is that which belongs to an orphan and is grabbed from him through force unfairly.

36. The happiest man is the one who learns from others (and finds the right path).

37. The most unhappy and unlucky man is unhappy even if he is still in the womb of his mother. (Just as a man who makes calendars knows what will happen in the next year in terms of time events, Allah (SWT) also knows with His limitless knowledge whether a man will do good or bad actions in the world. Since He knows this, He writes this fact into his fate while the man is still in his mother’s womb.)

38. Without a doubt, the place that all of you will go to is a grave which is two meters square. (Worldly friends and ranks accompany us only until the graveside.)

40. The most evil of speech is to tell something which is a lie. (Telling a lie is a sin which is cursed and which is contrary to divine wisdom.)

41. What will come is close. (Thus death is also close. We need to be always prepared.)

43. ‘Eating the flesh’ of the believer, that is, gossiping about him is rebellion against Allah (SWT).

44. Taking the property of a believer is haram (illegal), as is the shedding of his blood.

45. Whoever says ‘Allah does this work’ by swearing His name casts a slur on Allah (SWT). (Because Allah (SWT) does everything with His wisdom; He is not obliged to obey to the request of anybody.)

46. Whoever covers up someone else’s mistakes, Allah (SWT) will also cover his mistakes.

47. Whoever forgives anybody, Allah (SWT) will also forgive him.

48. Whoever keeps his temper, even if he is strong enough to commit violence, Allah (SWT) will reward him.

49. Whoever endures calamity, Allah (SWT) will replace what the calamity takes.

50. Whoever discloses anybody’s mistakes, Allah (SWT) will disclose his mistakes.

51. Whoever has patience, Allah (SWT) will reward him with much more reward.

52. Whoever rebels against Allah (SWT), Allah (SWT) will punish him. (Because, neither good nor evil will remain without a response.)

After telling us about these points, the Prophet (PBUH) said three times, ‘O my Lord, forgive me and my ummah, I wish forgiveness for me and for you from Allah (SWT).’” (Bayhaqi and Ibn Asakir report from the son of Amir’ul Juhani. Abu Nasri Sajazi reports it in his ‘Ibana’ from Abu Darda and he also reports from Ibn Masud. The hadith is hasan.)

Since the text of this hadith, which is comprised of 52 items, contains the perfection of humanity and the principles of happiness in this world and the hereafter, we have interpreted them as best as we can. By benefiting from Imam Munavii’s Fayz’ul Qadr, which is the interpretation of Jami’ul Saghir, and the Risale-i Nur collection, we have made some explanation according to the creed of Ahl’ul Sunnah. May Allah (SWT) forgive our mistakes and make us benefit from this hadith along with all believers. Amin.