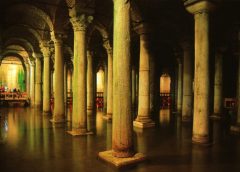 “Each one believed in Allah and His angels and His scriptures (Books) and His messengers – We make no distinction between any of His messengers – and they say: We hear, and we obey.’’(Baqara 2: 285)

As Fakhr al-Razi reported, the order in the revelation from Allah to His prophets is essential in enumerating the pillars of faith. He explained it as follows:

“It is certain that Allah’s revelation is delivered to prophets by His angels; so, angels become a means between Allah and Prophets. Because of that, the belief in angels is mentioned at the second place in the verse.

The third place belongs to the belief in books. Book is the divine revelation which the angel delivers to the people. We can compare it to the face of the Moon which shines by the light it takes from the Sun. So the angel is like the moon and the revelation is like the luminescence of the moon. As the moon itself exists before it has been luminous (in terms of order), the angels have been in existence before the divine revelation named ‘the Books.’ Because of that, the word “books” was mentioned after “angels” in the verse.

If Allah is intangible, why do Muslims turn to the Kaaba during Salah?