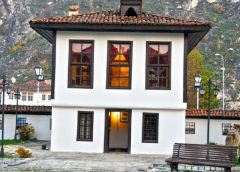 FROM THE BALKAN WARS

TO THE BALKAN PEACE The region is seeking peace and stability after a long history of wars, chaos and unrest

In order to protect and strengthen Muslim identity

in the Balkan region some real investment is needed.

The Balkans – The Status Quo and the Problems The Bulgarian Muslims who made headlines recently were demanding that they be given their rights.

Brief Information about the Religious Organization of Bulgarian Muslims

Restoration of the Assets of Islamic Foundations

The Future of Islam in Bulgaria

More stories from this issue Acquiring knowledge, using our minds and thinking deeply are vitally important
intellectual actions in studying the basic sources of the religion of Islam.

Nothing is Coincidence: There is Wisdom Behind Everything! Feride Karahan

Beware of the calamity or disaster which when it occurs is not restricted to
wrongdoers, but which strikes the innocent as well. The meaning of the above
verse is as follows: this world is a field of trial and examination, and a place of
striving where man is accountable for his actions.

Tawafuq, the Cipher in Qur’an and the Book of the Universe Zafer Zengin

Tawafuq has the dictionary meaning of “to be correlated to each other in some way”
and “to be in a pleasant coherence, correspondence, and conformity with each other.”
‘Coincidence’ is defined as an accident, an incident happening by chance, and an
encounter occurring without any planning.

The Fear of Death and Hiding Behind the Wall Muhlis Körpe

Questions require answers. They cannot wait. Unanswered questions can prey on people’s
minds like a worm, to the point where a question without an answer can become like
a torture in life. Then I added some other questions. “What is the possibility of your
mother’s death?” “She could die any moment,” he said.

While in the past, under certain conditions, Muslims were ordered to engage in jihad
against their enemies as a defence, in today’s world of chaos, uncertainty and lack of final
authority, Muslim individuals are responsible for disciplining their own souls and fighting
an intellectual battle against unbelief. No intercession availed with Him save for him whom He permitted. Yet, when fear
is banished from their hearts, they say: What was it that your Lord said? They say:
The Truth. And He is the Sublime, the Great. (Saba, 34:23)

The Contribution of Bediuzzaman Said Nursi in the fields of Religion and Philosophy Dr. Oghuz Mashkur Khan

Using logical proofs and reasoned argument and frequently comparing the Qur’anic
teaching and civilisation with those of philosophy, Risale-i Nur treatises specifically
answer the questions and doubts raised by philosophy and the scepticism it causes.

The subjects related to the expectations of the Islamic World from Turkey and their
hope should transform from compliments encouraging us and flattering our pride into
realistic platforms, pondered and well-prepared projects and activities devoted to a
human training campaign with a well-defined framework. We had an interview with Salahuddin Ahmad Mazhary who participated in a forum in
Istanbul from the UK. He lives in London. He is a student of History at the School of Oriental
and African Studies (SOAS) in London. We talked with him about the problems that Muslims,
particularly young Muslims, are experiencing in the UK.