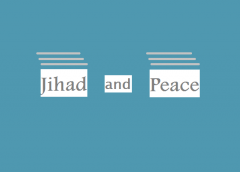 Here, the greatest jihad is postponed to another article. Only the lesser jihad which is called jihad ul-asghar and its attitude towards peace are investigated shortly.

The jihad – which is well-known and ordered in the Qur’an through several verses such as “Fight in the cause of Allah those who fight you, but do not transgress limits; for Allah loves not transgressors.” (2:190) – is not against peace in the light of Islamic thought. Because, about jihad, there are some conditions and limitations that can be divided into three groups: First, if the enemies of Muslims want peace, Muslims have to accept that offer. The second condition: without a valid reason, such as oppression or a war against a Muslim country, the Muslim country cannot wage war. The last condition is that Muslims cannot harm civilian people, animals and the environment.

The first condition, which gives to Muslims the responsibility of to accept the offer of peace of enemies, can be understood through the verses of the Qur’an:

“… Therefore, if they leave you alone, refrain from fighting you, and offer you peace, then Allah gives you no excuse to fight them.”(4:90) and “If they resort to peace, so shall you, and put your trust in Allah. He is the Hearer, the Omniscient.”(8:61).

Ibn Hisham (…-834), one of the Islamic scholars from Islamic Golden Age, says that about the Hudaybiyah Treaty, although the companions of Mohammed (pbuh) did not want and the articles of the Hudaybiyah Treaty were disadvantageous for Muslims, the prophet Mohammed (pbuh) chose to accept the peace offer of non-Muslims. Those verses and the choice of the Prophet show that, with this first condition, jihad is not against peace.

As the second limitation, war cannot be waged without a valid reason. There should be oppression or an attack upon the Muslim country to wage a war. About this, the Qur’an says: “Permission is granted to those who are being persecuted, since injustice has befallen them, and Allah is certainly able to support them” (22:39) and “Fight in the cause of Allah against those who fight against you, but do not transgress limits. Lo! Allah loves not aggressors. …And fight them until persecution is no more, and religion is for Allah. But if they desist, then let there be no hostility except against transgressors” (2:190,193).

In the light of these evidences, it can be said that if there is oppression, Islam takes responsibility to prevent it. This is not against peace, obviously. Moreover, not to prevent a cruelty is unjust and against peace; because the rights of the people under oppression must be protected by other people.

The third limitation for jihad is that innocent civilian people must not be under attack by Muslims. In other words, Islam protects the life of innocent people. The Qur’an says about this: “… You shall not kill – Allah has made life sacred – except in the course of justice…” (6:151 and 17:33) and “… We decreed for the children of Israel that anyone who murders any person who had not committed murder or horrendous crimes, it shall be as if he murdered all the people. And anyone who spares a life, it shall be as if he spared the lives of all the people…” (5:32)

Through these verses, and by Islamic rules, the lives of innocent people are protected. In addition to this, spiritual, faithful and devout Muslims, since they believe in the Last Judgment, cannot easily make oppression upon other people; they fear Allah and they know well that everything they do in this world will be examined and asked one by one in the Hereafter.

The wars waged by Muslims which do not fulfill the conditions we have mentioned cannot be considered as jihad in Islam because of not observing the limitations. (Those kinds of things are terrorist actions which mostly are supported by various -especially western- power centers in order to conduct Islamophobic actions and to show Islam as a religion of terror. In those kinds of actions, we learn from the news that there are secret plans of extrinsic countries which underlie the terrorist actions.) Moreover, jihad is a duty of states, not of individuals. Therefore, the decreers and starters of war cannot be ordinary people, but have to be governors. So, the terrorist actions are totally away from having Islamic attitude and spirit.

All the three limitations prove that the little jihad is not against peace; with its limitations, especially opposing oppression, and through its protection for the people under attack, this type of jihad advocates justice and peace in the world.

One thought on “The Jihad and Peace”