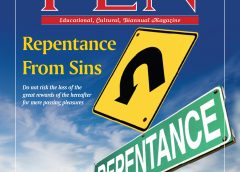 True justice, giving the right holder what he deserves by protecting his right, cannot be achieved through absolute equality.

Dua’ in the Qur’an and its importance Enes ÇALIK

Hasad (envy) leads to unhappiness, bad morality, mischief and even disbelief. The cure: do not envy the worldly things, which are transient; and do not envy the matters of the Hereafter, where there is no room for jealousy.

We must constantly be on alert against the sins that feed the lower-self.

Repentance from Secret Sins of the Heart Cemal ERŞEN

We must recognize the sins of our hearts -which are, in fact, the cause for many other sins- and repent to our Lord in sincerity.

Enduring the misfortunes and illnesses, withstanding the desires of the lower self and being steadfast in worshipping are kinds of sabr (patience) that will lead us to the Paradise.

Risale-i Nur is a mujaddid that has done the duty of revival in terms of preserving the tenets of faith.

Risale-i Nur explains the divine truths of the Qur’an and Sunnah in a clear and convincing way.

Disbelief makes people miserable, and it costs them their success and happiness in this life and the next.

How to Arouse Curiosity of the New Generation? Hasan Hüseyin YILDIRIM

Curiosity, which urges children to learn, must be promoted in education.

Rights of the Wife over Husband Zakir ÇETİN

Husband must be friendly, kind, generous and nice to his wife.

Family Life in Ayahs and Hadiths

Fruit juice production is quite problematic. It is necessary that every substance used in production process must have a reliable halal certificate.

Fashion harms the meaning of tasattur that serves the dignity of human being and prevents many social problems.

Getting Motivated to Perform Salah risaleonline.com

The five daily prayers, our first and most important duty, are the key to the happiness in this life, preventing us from starving spiritually, and in the Hereafter, bringing us eternal Paradise.

Is Man Doomed to his Destiny? askaquestionto.us

Free will- no one can deny that it exists- is one of the biggest evidence that we are not doomed to the destiny.

There exists for man a great comfort in hardship. Since man’s fitrah (innate disposition) is agitated, his comfort is only to be found in work and striving.

The writing of the Qur’an took its finest form in the 19th and 20th centuries with “Ayat Barkanar” and “Tawafuq” styles.