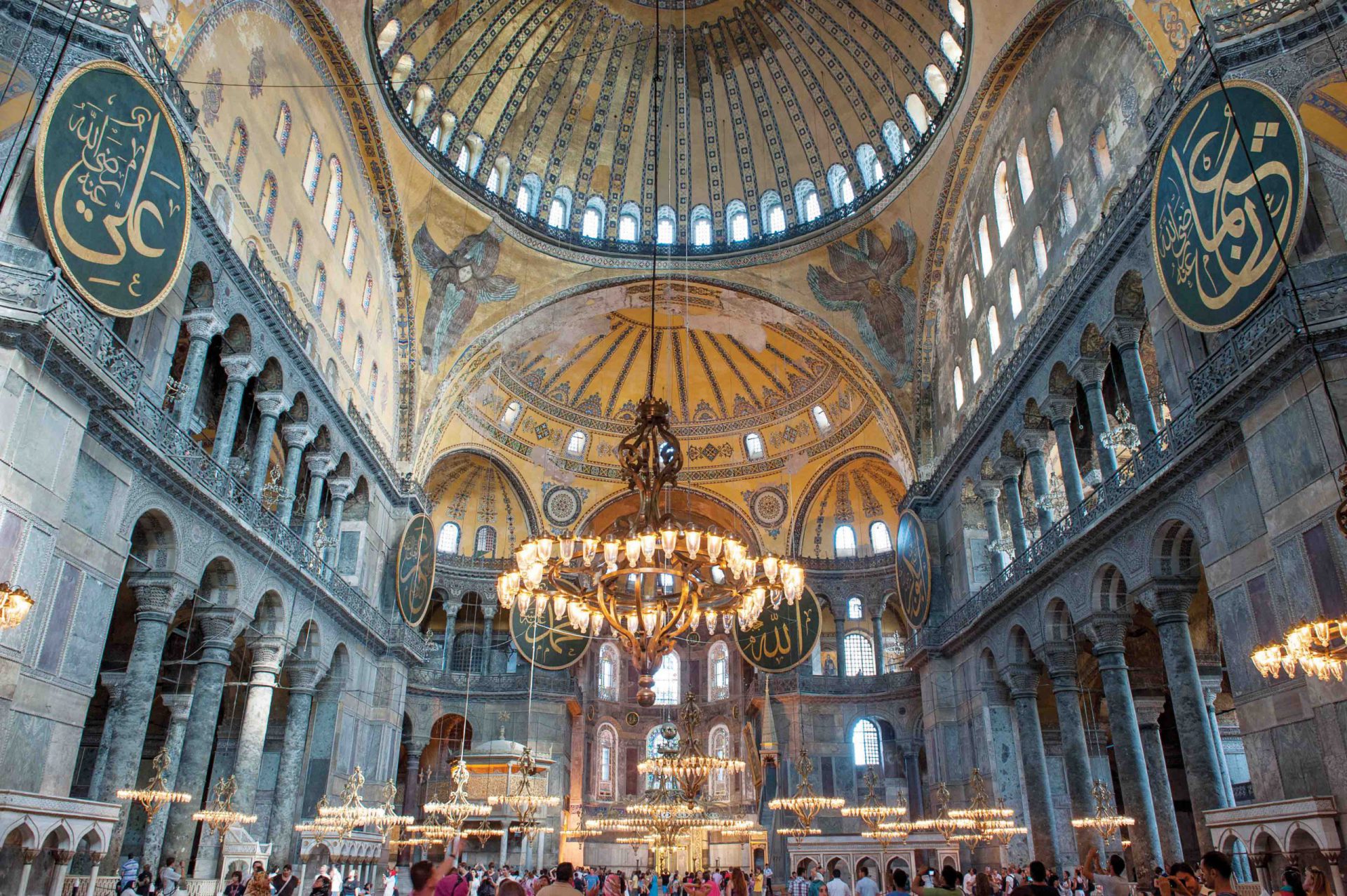 After the conquest of Istanbul, Sultan Mehmed II added a mihrab, minbar and minaret to Hagia Sophia and turned it into a mosque and built a madrasa to the north side of it. Taking his mosque, which was the right of his sword, under special protection, Mehmed the Conqueror (Fatih Sultan Mehmed) declared Istanbul as the new capital of the Ottoman State – Istanbul is also the last capital of Islam.

After the conquest, the young Sultan, who took the title of “Conqueror” (Fatih) at the age of 21, came to the garden of Hagia Sophia by reading aloud the Chapter of Conquest from the Qur’an, one day after the conquest of Istanbul, opened the door of Hagia Sophia saying “Ya Fattah” (O Opener), a Divine Name of Allah. Then he declared that the life and property of those who took refuge in Hagia Sophia was in safety.

After the conquest, the first Friday prayer was performed in Hagia Sophia Mosque. This has taken its place among the most important events of the conquest. Architects and workers worked day and night. And after making the necessary renovations in the biggest church of the city, which was conquered on Tuesday, and after making it ready, Fatih Sultan Mehmed came to the mosque on June 1st 1453 with his ameers, warriors, veterans and a large of group of people and officials.

When Fatih Sultan Mehmed began to recite a sermon with a loud and imposing voice, “Alhamdulillah, Alhamdulillah,” all the veterans and warriors in the mosque shed tears, thanks to the peace of attaining the good news of the Prophet Muhammad (alayhissalatu wassalam). After reading the first sermon after the conquest, which is a general rule, Fatih Sultan Mehmed descended from the pulpit and asked his teacher Akshamsaddin to be the imam, and then performed the Friday Prayer together with all warriors.

The Hagia Sophia Mosque has led to the emergence of a new tradition: the largest of the churches that were converted into mosques in the cities conquered after Istanbul started to be named “Hagia Sophia”.

Immediately after the conquest, the building was strengthened and preserved in the best way, and it continued to exist as a mosque with the additions made by the later sultans. The mihrab, minbar, muazzin hall, sermon lectern and maqsura were added to the Hagia Sophia, and bronze lamps on both sides of the mihrab were given as a gift to the mosque by Sultan Suleyman the Magnificent (Kanuni Sultan Suleyman) upon his return from Buda Campaign (1526). The Hagia Sophia, with its minarets, madrasah, primary school, muwakkithane, ablution fountain, public fountains, sundials, trustees’ room built outside the building in different periods, was transformed into a complex in time.

Fatih Sultan Mehmed added a minaret to Hagia Sophia, which is a sign of the mosques, and later his son Bayezid II had another minaret built. Finally, Selim II by adding two more minarets increased the number of minarets to four and he had the mosque undergone a complete repair. Apart from these, Mahfil of Sultan was added during the reign of Ahmed III, and a library inside on the right side and also a fountain outside was built during the reign of Mahmud I. The interior and exterior general appearance of the mosque has undergone little change, preserving its first appearance.

The first tomb in the graveyard of Hagia Sophia is the tomb of Selim II, one of the most beautiful works of Sinan the Architect (Mimar Sinan). Also, the tomb of Murad III which is the work of Architect Davud, the tomb of Mehmed III which is the work of Diver Ahmed, and also the tombs of sons of sultans, and Sultan Mustafa I and Sultan Ibrahim are in the graveyard. Family members of the sultans are also in each of these tombs.

In Hagia Sophia, eight calligraphy paintings in a diameter of 7.5 meter were placed on the walls of the main space, which were written by the Calligraher Kazasker Mustafa Izzet Efendi during the period of Sultan Abdulmecid.

After being used as a mosque for 481 years, Hagia Sophia Mosque was turned into a museum with the decree signed on November 24th 1934.

Fulfilling the will of Sultan Mehmed the Conqueror and his soldiers, who attained the good news of our Prophet (alayhissalatu wassalam), was the duty of loyalty to the ancestors of this nation.

After 86 years, Hagia Sophia was reopened on July 24th 2020, alhamdulillah.

The reopening of Hagia Sophia, which is the symbol of conquest and the right of the sword, as a mosque will be a means of awakening of this nation, insha’Allah.