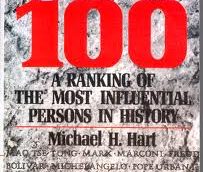 We will share the findings of a western non-Muslim scientist, Michael Hart, about our Prophet (PBUH) in this article. Ustad Bediuzzaman says; “Virtue is what even his enemies confirm” Now, although that man is a non-Muslim, since he searched with fairness he saw the clear virtues of our Prophet (PBUH) and showed these facts in his book in a clear way that everybody can understand. Assigning the first place to the Prophet Muhammad (PBUH) in his book entitled “The 100: A Ranking of the Most Influential Persons in History” he has announced a very accurate and important truth to the world.

The other interesting point in article is that the features narrated as the proofs of choosing him first overlap one to one with the findings in the Seventh Droplet of the 19th Word where Ustad Bediuzzaman proved that the Prophet Muhammad (PBUH) is a true prophet.

Let us quote from Ustad:

“Look! How he abolished wild and evil customs of those wild tribes who were obstinate and bigoted in their customs and taught the best moral values and made them teachers to the whole world and masters to the civilized nations. He fulfilled this without pressure, conquering hearts and minds and souls. He became the beloved of hearts, teacher of minds, trainer of souls and sultan of spirits.” (Bediuzzaman Said Nursi, The Words, 19th Word)

We extracted the most interesting points of five pages below assigned for our Prophet (PBUH) from Michael Hart’s book:

Muhammad: The central human figure of Islam, regarded by Muslims as the messenger and last prophet of God. Active as a social reformer, diplomat, merchant, philosopher, orator, legislator, and military leader.

My choosing Muhammad as the first person of the list of the most influential people of the world may astonish some readers and even some may question this matter; but he was the unique person who excelled perfectly both in religious and secular fields.

Muhammad, who originated from humble ancestors, established one of the greatest religions of the world, spread it and he became a very influential political leader. Today, thirteen centuries later after his death the power and extend of his influence continues.

Most of the people in this book had the opportunity to be born as a member of nations which had high cultural, political and civilization values and they were trained according to these values. But, Muhammad was born in 571 in the city of Mecca, which was in the south Arabia and far away from trade, art and science centres and was a most underdeveloped area of the world. He was orphaned aged six and was brought up in humble conditions. Islam tradition says that he was illiterate. After he married a rich widow when he was twenty five, his economic situation improved. Nevertheless, until he was forty there were few signs indicating that he was an extraordinary man.

(…)  Arab Bedouins were known as formidable warriors. But they were few in number; clashes and devastating fights among them wreaked havoc on the area. They were not equal to the armies of kingdoms settled in the cultivated areas in the north. However, after being unified for the first time by Muhammad and their hearts filled with the enthusiasm of the faith of Allah these little Arab armies attempted the most surprising conquests of history of humanity.

In the north-east of Arabia was the Great Persian Empire of Sassanids and in the north-west was Byzantium or East Roman Empire whose centre was Constantinople.  In numbers, the Arabs were never equal to their adversaries. But in the battlefield everything was too different and the Arabs filled with excitement conquered all of Mesopotamia, Syria, and Palestine. Until 642, the Persian armies were defeated in Qadisiya (637) and   Nihawand (642) wars and Egypt was captured from Byzantium Empire.

Even those conquests which were organized by Abu Bakr and Umar , the close friends and successors of the Prophet, did not suffice for the Arab armies. Until 711, they descended to Atlantic ocean conquering throughout the North Africa. They turned to the North here, passed Straits of Gibraltar and defeated Visigoth Kingdom.

(…) Overflown with the discourse of their Prophet, these bedouins, in a war time lasting a century, established an empire extending from Indian borders to the Atlantic ocean; the greatest empire which the world had ever witnessed until that day. People largely converted into the new faith in the end where the armies conquered.

(…) In the course of time the new religion went on spreading far beyond the boundaries which the first Muslim conquests reached. Today, it has millions of believers in Africa and Middle Asia; and many more in Pakistan, North India and Indonesia.

(…) So, how should the extension of influence of Muhammad on the history of humanity be evaluated? As all religions, Islam has a great influence on lives of its believers. This is a reason why founders of the great religions in the world come to the forefront in this book. At first glance it may seem strange that the Muhammad is before Jesus, although the number ofChristians living in the world were two times more than Muslims. There are two basic reasons for this preference. First; Muhammad had an important influence in the development of Islam much more than Jesus had in development of Christianity. However Jesus established basic moral and spiritual creeds in Christianity (separate from Judaism), the one who developed Christian theology and spread it and wrote most of the New Testament was Saint Paul.

But Muhammad founded both theology and basic moral and spiritual principles of Islam. In addition, he played the most important role in recognition of new belief and settlement of Islamic worships. Furthermore, he is the writer of the Qur’an the holy book of Islam which was revealed to him and expresses his discourse. Most of his sayings were recorded largely accurately when he was alive and his hadiths which were ordinance were compiled not so long after his death and had become very effective. Thus, Qur’an reflects thoughts and teachings of Muhammad. We do not have Jesus’s authentic compiled teachings as in this way.  Since the Qur’an means to Muslims the importance at least Bible means for Christians the effect which Muhammad created through Qur’an was much greater. It is likely that the relative effect which Muhammad had on Islam is greater than the effect that Jesus Christ and Saint Paul together had on Christianity. Thus, it is possible to say that Muhammad is influential on history of humanity as much as Jesus Christ is, just only in terms of religion.

Apart from this, Muhammad (differently from Jesus) was a leader in secular fields as well as he was in religion. Even, he deserves to be called as the most influential political leader of all times as the driving force behind the Arab conquests.

(…)  Thus, we see that the Arab conquests in the seventh century have been playing an important role on history of humanity so far. This unmatched combination of secular and religious effects leads me to believe that Muhammad deserves the title “the most influential person in human history”.

Prof. Michael Hart, an American scientist who had repercussions across whole world with his book titled “The 100: A Ranking of the Most Influential Persons in History” attended in an award ceremony in Cairo ten years later, after his book was first published. In the ceremony he was asked by correspondents of the Al- Ahram newspaper as following “It has been nearly ten years after you published your book. You assigned the first place to Prophet Muhammad (PBUH) in your “100 influential persons” book. Do you still preserve that as your approach?” Hart answered the following: “This is the first list of celebrities. If this number is raised to 200-300, the place of Muhammad in the top of the list is fixed.

When I searched famous people, I determined some fixed criteria. One of these is the deep and comprehensive traces which they have on human history. The reason why I chose Muhammad as the famous of the celebrities is both his prophethood and excellent success in religious and secular fields. Human morality has never witnessed a perfect religion like Islam philosophically and judicial. After passing away of Muhammad Islam continued to spread in the east and west of the world. And still, many people prefer to convert into Islam with their minds and hearts.  The religion to which Muhammad invited people emerged fourteen centuries earlier in an area which was far away from civilization and cultural centres. And it advanced suffering some difficulties. After all, Islam made progress in every area of the world. And I believe that a perfect man like Muhammad will never come again.”

12 thoughts on “The Greatest Person in World History”