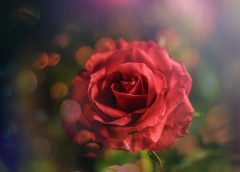 A bee begins to fly after a few minutes of its birth. Nobody teaches it how to make honey. It is sent to the world already knowing all what it will do. Similarly, many animals are also born knowing things that they will do all their lives; they don’t get any education.

But humans are not like that. They start learning from birth. It takes them a year to learn to walk. They start to make simple sentences by combining just two words at two years of age. In order to be able to get an education, they should come to 5-6 years of age. In short, humans have to imitate people who are older than him, since he has to learn how to live from them.

That is why, in the words of Imam Bediuzzaman, “The duty of man in this world is ‘improvement by learning’.”

Our first teacher is our mother. Then we learn from our father, our uncle, our aunt and the other elders. As we grow older, we start school and have teachers. Sometimes we read, listen or observe on our own in order to learn.

But on top of all teachers, scholars, and sages, there is one who is the source of all goodness and beauty: The Prophet Muhammad (pbuh). The life of our Prophet (pbuh), who has morality and wisdom that have been granted by Allah (jalla jalāluhū), is the only exemplary way of life for us. The Lofty Sunnah, composed of his words and acts, are the foundation stones which we will build our lives upon. Here are a few samples from the Lofty Sunnah:

Our Prophet (pbuh) would not drag his feet as he walked, and would lift them up firmly from the ground. When he was walking, he would not sway to the right and left, and would lean forward slightly as if he was on a ramp.  He would never walk completely upright nor would he walk rapidly. But as a blessing from Allah, he could cover long distances in a short time. (Ali Yardım, Peygamberimizin Şemaili (Shamail of Our Prophet), Damla Yayınevi, s. 181)

Washing hands before and after eating

Our Prophet (pbuh) recommended that we wash our hands before eating. Even if our hands are clean, obeying this Sunnah means a respect for the blessings that Allah sent us. So our hands don’t have to be dirty to wash before we eat. Rasulallah (pbuh) stated the following about washing our hands after the meal: “If something happens to one who has gone to bed without washing their hands after dinner, may he seek fault in himself, not in someone else!” (Bukharî, Al-Adabu’l-Mufrad, Nu: 1219-1220; Abû Dawud, Sunen III, Nu: 3852)

The Fruits that he ate

Jabir bin Abdullah (ra) tells: We were with the Messenger of Allah (ﷺ) at Marr az-Zahran, and we were plucking the fruit of the Arak tree, whereupon Allah’s Messenger (may peace he upon him) said: Pluck only its black ones (for they are the most pleasant). We said: Allah’s Messenger, it seems you shepherded the flock. He said: Yes. Has there been a prophet who did not shepherd it (Sahih Muslim 2050)?  Talhah bin Ubeydullah (ra) tells “I entered upon the Prophet (ﷺ) and in his hand was some quince. He said: ‘Take it, O Talhah, for it soothes the heart.’”  (Sunan Ibn Majah, Book 29, Hadith 3494)

Hadhrat Aisha (ra) tells: The Messenger of Allah (asm) used to eat melon with fresh dates, and he used to say: The heat of the one is broken by the coolness of the other, and the coolness of the one by the heat of the other. (Sunan Abi Dawud 3836) Abdullah bin Jafar (ra) said “The Prophet (pbuh) used to eat cucumber with fresh dates.” (Sunan Abi Dawud 3835)

Abdullah bin Haris (ra) said: I have never seen a person who smiled as much as the Messenger of Allah (pbuh). (Shama’il Muhammadiyah)

Jareer bin Abdullah (ra) narrates: From the moment I became a Muslim, the Prophet (pbuh) did not refuse any desire of mine (did not make me feel embarrassed about my becoming a Muslim late) and smiled whenever he saw me. (Shama’il Muhammadiyah)

One day when our Prophet (pbuh) talked with his companions. He is reported to have said: “Do not argue with your brother, do not joke with him, and do not make a promise, only to not fulfill it.” Then the companions said: “’O Messenger of Allah! You joke with us?’ He said: ‘Indeed I do not say except what is true.’” (Jami` at-Tirmidhi 1995,1990)

There was a man named Zâhir among the desert nomads Bedouins around Medina. This person from the As-hāb (the companions) was very poor and ugly so that one would compliment him.

One day Hadhrat Umar (ra) came to visit the Messenger of Allah (pbuh). When he arrived, our Prophet (pbuh) was laying on a reed mat and saw that the mat had left marks on his body. He started to shed tears because of what he saw. Our Prophet (pbuh) asked: “Why are you crying O Umar?” “O Messenger of Allah! When I saw this simple life of yours, I remembered the kings of Sassanid and Roman sitting on golden thrones and wearing clothes of silk, satin and velvet!” “Don’t cry O Umar, it is not worth crying. Does it not please you (to know) that  the world blessings are theirs and the Hereafter is ours? If I wanted the mountains of gold to move and come to me, they would run behind me. If the world were to have a value equaling that of a wing of a fly in the sight of Allah, the disbelievers would not be allowed [to take a drink water, nor] even a sip from the world.” (Sunan Ibn Majah; Jami’ at-Tirmidhi)

They asked Hafsah (ra), “What is the bed like that the Messenger would sleep in your house?” She (ra), one of the mothers of the believers, replied:

“We would lay a thick and twice folded blanket that was woven from wool. He would sleep on it. One night, I decided that it would be better if I folded it four times. But when he got up the next morning, he asked astonishedly:

“What did you lay under me tonight?” “Your old bed O Rasulullah. However, we’ve folded it four times so that you can feel softer and sleep well, that’s all.”

“Make it as it was again. Because the comfort of softness prevented me from night prayer.”