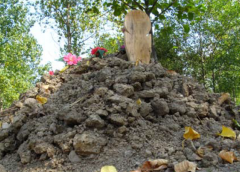 During a conversation in a working environment when he was with his mother, I asked a question of a young man who is a student in a prestigious university and has read lots of books:

“Do you love your mother?” He said, “Yes” without hesitation. I asked again, “Where will your mother go when she dies?” He paused for a moment, and thought. He could not answer. What about your beloved ones, your family, your youth, your memories, your studies, your works, etc.? I asked lots of questions one after another. He kept silent. And so I started talking on his behalf. “According to you they will perish. They will be wiped out of existence. They will leave you without coming back and it will not be possible to see them again. In short, it is a life that will cease to exist for no good reason. Now, if people filled with happiness and joy heard those words would you see any kind of contentment on their faces? Of course not.

Questions require answers. They cannot wait. Unanswered questions can prey on people’s minds like a worm, to the point where a question without an answer can become like a torture in life.

cure. Whenever they hold their child instead of giving joy, it will cause them to shed bitter tears in the deepest part of their hearts. The young man remained silent. He was plunged into deep thought, because he had not asked himself those questions till that day. He had not been able to ask. He had not been able see the consequences of these thoughts. He had not been aware of the fact that all the things that he felt as joy and happiness were just temporary fantasies of his passions and lust. He has not known the painless pleasures that can be obtained through mind, spirit, conscious and divine feelings. He has not been aware of the fact that he was living just putting his head under the sand of negligence like an ostrich. During those moments it was as though life stopped and froze. He has not been aware that his body was in heaven, but his soul was burning in the fires of the hell. He has felt pain. But he has never been able to find out where it came from. He has not known that he came to this world by a divine will. He has not known that life is a road leading to the hereafter. He has not thought that this world is a passage to eternity. Maybe he has thought himself as a fledgling jumping from his nest to the world.

The following story, which is quite popular in the oriental classics, and which was used by Imam Bediuzzaman and can also be found in the works of Tolstoy, gives a good example of people with this state of mind. “A traveller jumps into a well without water to escape from a lion he came across in the desert. He sees a dragon at the bottom of the well; the dragon waits with its mouth open to eat the man. He cannot climb out of the well because there is danger of being torn apart by the lion. He cannot descend to the bottom of the well either because the dragon is watching him with its mouth open. The poor man holds on with all his strength to a branch growing out of the wall of the well. He knows that after a while he will start to lose his strength and fall into the hands of one of the two dangers. At that moment he sees two mice gnawing at the branch he is holding. One of the mice is black, the other is white. The traveler then understands that he has no chance of escaping. He looks around. He sees drops of honey on the leaves of the branch and some fruits. As if nothing is happening, he leans forward and start licking the honey and picking the fruits. Indeed, this is not just a story, this is the complete reality.

In the same way, people are escaping from a lion, which is the appointed hour of death, and holding the branch of life so as not to fall into the mouth of a dragon, which is the grave. Day and night gnaw at the days of people’s lives like mice. So the people try to suck a few drops of honey in life to find some sort of comfort. They act on the principle of ‘Carpe diem!’ (Seize the day!)

It is not possible to find a meaningful thing despite death. It is a reality that death demolishes everything, even erasing the memories of people to come. So how can you be happy in spite of death?

Indeed, it is faith which gives a human the opportunity to truly live, because it is faith which gives the meaning of eternity to a mortal human. It is faith which teaches him the meaning of life, gives strength to his life, cherishes his goals and wishes and becomes a source of hope. It is the faith in the hereafter. It is to know the end. It is to see that the journey of life does not end with absolute nonexistence. It is to know about eternity, which gives meaning to everything we do or which we are interested in. It is faith in the hereafter which keeps people’s enthusiasm alive. If a person would like to lead a life worthy of a human being, they should have faith. A life without faith is not possible, it cannot bring a human being real happiness.

The decision is whether to live a life which is an embellished lie, or to live with the Islamic faith which is perfect in every way… it is a matter of choice.