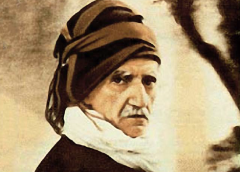 Bediuzzaman Said Nursi was born in 1877 in a small village called Nurs, in the district of Hizan, a province of Bitlis (Turkey). He was an Islamic scholar of the highest standing, having studied not only all the traditional religious disciplines, but also modern science, and earned the name Bediuzzaman, the wonder of the age. He was an advocate of a form of Islam strongly committed to non-violence and constructive engagement with the West and with Christianity.
He brought teachings of the traditional religious disciplines as well as modern sciences, and founded a university in the eastern provinces of the Empire, the Madrasatu’z-Zahra. However, the defeat of the Ottomans in World War I saw the end of the Ottoman Empire and its dismemberment, and the occupation of Istanbul and other parts of Turkey by foreign forces. These bitter years also saw the transformation of the old Said Nursi into a New Said, heralding the second period of Bediuzzaman’s life.

Despite the acclaim that he received and the services that he performed as a member of the Darul-Hikmat’ul-Islamiya, a body of ulama (Islamic scholars) attached to the Shaykh’ul-Islam’s office, and who fought against the British, Bediuzzaman underwent a profound mental and spiritual change, in the process of which he turned his back on the world. Realising the inadequacy of the human science and philosophy he had studied as a means of reaching the Truth, he declared the Qur’an as his sole guide.

In his exile in Isparta in 1926, Bediuzzaman started writing treatises, which demonstrated all the truths of belief by means of powerful proofs. Using logical proofs and reasoned argument and frequently comparing the Qur’anic teaching and civilisation with those of philosophy, they specifically answer the questions and doubts raised by philosophy and the scepticism it causes. This method, which shows clearly and simply these truths in an unprecedented way, as well as solving and explaining with convincing proofs many of the mysteries of religion, indeed resulted in a large number of people attaining certain belief, and the method had unparalleled success in the repressive conditions of those times, spreading throughout Turkey. Furthermore, since Westernisation is a universal phenomenon and the Western materialist philosophy has permeated the Islamic World, the success of these writings, the Risale-i Nur, in saving and strengthening belief has continued to grow, and is now to be witnessed throughout the Islamic World.

Nursi offered cooperation between the Muslims and devout Christians in the struggle against communism and materialism. Of course, doing this, he did not intend to grant concessions at the expense of the principles of Islam. Nursi helped people to reinvigorate the prophetic traditions.

The Theological Philosophy of Bediuzzaman Said Nursi
Said Nursi had a considerable knowledge of modern science and he attempted to integrate it within a theistic perspective. For him, there was no dissonance between the Qur’an and modern physical sciences; rather, they made relating the truths of the Qur’an to modern men and women even easier. Written during his exile, Risale-i Nur was later described as a semantic tafseer or commentary, which expounds the truths of the Qur’an.

Third phase of Nursi
He was finally released in 1949. In the last decade of his life, he settled in Isparta. After the introduction of the multi-party system in Turkey, he advised his followers to vote for the Democratic Party of Adnan Menderes which intended to remove the anti-Islamic laws introduced by the Kemalists. Said Nursi considered communism to be the greatest threat of that time and stressed the Qur’anic views as an alternative to it.

The Risale-i Nur
Written during his exile, Risale-i Nur is a six thousand page commentary on the Qur’an written by Bediuzzaman Said Nursi in accordance with the mentality of the age. Since in the contemporary period, faith and Islam have been the objects of attacks launched in the name of so-called science and logic, Bediuzzaman Said Nursi therefore concentrated in the Risale-i Nur on proving the truths of faith in conformity with modern science through rational proofs and evidence, and by describing the miraculous aspects of the Qur’an. Risale-i Nur is not a tafseer (commentary) on the Qur’an in the usual sense of the term; rather, it attempts to establish links between the Qur’anic verses and the natural world. It also attempts to show that there is no contradiction between religion and science.

His method was to analyse both belief and unbelief, and to demonstrate through clearly reasoned arguments that it is possible, by following the method of the Qur’an, to prove rationally that all the truths are the only rational explanation of existence, man and the universe.

The theological philosophy of Bediuzzaman is uniquely suited to addressing not only all Muslims, but also all of mankind for several reasons. Firstly, it is propounded in accordance with modern man’s mentality, a mentality that, whether Muslim or not, has been deeply imbued with materialist philosophy: it specifically answers all the questions, doubts and confusions that this causes. It answers to all ‘why’s’ that mark the questioning mind of modern man.
Thus, his philosophy explains and expounds the basic tenets of belief, the truths of the Qur’an, to modern man. Bediuzzaman thus demonstrated in the form of easily understood stories, comparisons, explanations, and reasoned proofs, that rather than the truth of religion being incompatible with the findings of modern science, the materialist interpretation of those findings is irrational and absurd. Indeed, Bediuzzaman proved in his philosophy that science’s breathtaking discoveries of the ways in which the universe functions corroborate and reinforce the truths of religion.

Nursi substantiates Islamic faith on the basis of the certainties of modern physical sciences and reads the cosmic verses of the Qur’an in the light of modern science. As a religious scholar well-grounded in traditional Islamic sciences, Nursi was aware of the apparent discrepancy between traditional cosmology articulated by Muslim philosophers and Sufis, and tried to prove Islamic belief with modern sciences, thus providing a solid rock on which to construct a new understanding of the message of the Qur’an.

Human as a Minimized Sample of the Universe

Are we really able to see?

The Islamization of Knowledge