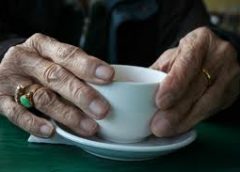 Benjamin was in a sombre mood with his face full of sadness. He had remembered those days again. Thinking of it, a deep sorrow and grief invaded his heart. He was about to cry. A long time ago, he was informed about his elder son’s drug deals, and soon after, his death. He had dedicated everything in his life to his younger son from then on. His younger son,too, left his dearest father alone in the world after an atrocious car accident. His only source of life, his little son, had died. He was in tears and brooding.

After a while, he came to himself and wanted to leave England. He didn’t want to stay anymore in this gloomy land which has taken his two sons in a horrible way. Benjamin had been retired for over ten years. He wasn’t spending much money as he planned to give it to his sons but it no longer mattered. He had nothing to do with that money anymore.

He made his decision to travel around the world. He would go anywhere he wanted. At first, the Far East, Japan, Taiwan and Korea. Different cultures and tastes would be tried. Who knows, that might make him forget everything he lived through during the last 2 years.

He started off and went to many countries seeing the cities, visiting the temples. But… it was useless. It didn’t work. He was still in great pain. After all, he decided to go to his brother’s land, New Zealand. His brother was married with two sons. Jacob, his brother’s face, was just like his late son. He went away there just to forget but was reminded of his son.

He had no choice but to leave. Where could he go, what he could do, how could he survive? The life was like a dungeon for him, only torture with no pleasure. While he was contemplating, something on the newspaper caught his eyes. It was yesterday’s paper with yellowish pages and big letters in the advertisements. He saw an ad suddenly: “Legends and Mysteries of Egypt: The Pyramids”. A 10 day holiday with a great discount and programme. He didn’t know why it was that cheap, maybe because of the season, winter. He used to like winter and he just wanted to leave New Zealand. Yes, he liked that idea. He would set off to Egypt.

It was his seventy eighth year of his life when he landed in Egypt. He didn’t leave the hotel on the very first day. He was tired of the journey as well as his long life. On the next day he followed the programme and joined the group and saw the pyramids. It was a new day. Huge stones, a mystical atmosphere and interesting buildings didn’t attract his attention at all. There was something missing in the deepness of his heart and soul. Sorrow was following him here and there. He was trying to find a place to flee from it.

The group on the tour went back to hotel but Benjamin didn’t. He had got off on the way and went to the city centre. He was crazy for speed in his early ages. He decided to rent a motorbike and hopped off to the nearest rent-a-car service he found. The young man in the service greeted him gently with his broken English. Welcoming him nicely, he just learnt what Benjamin asked for. He was after a motorbike. Having seen the old man was not good enough to ride the bike, he tried to persuade him not to. He knew his boss would be angry with him again, but he was afraid that the old man would possibly be involved in an accident of an accident the old man possibly would involve in. He had a good conversation. After a few seconds they started getting to know each other. The young man’s name was Ahmad and he was about in his thirties. After half an hour and some chat and thanking the young lad, Benjamin left for his hotel.

During the days that followed days, Benjamin came and spoke to the young man in the afternoon. Ahmad was kind and he behaved in a gentle way. He helped Benjamin, advising him on where to go and how to find the stuff he was looking for. They spent good time together. One day, Benjamin visited him again and depending upon their friendship Ahmad invited him to go to a masjid (mosque) together by motorbike. He accepted this ride but not the mosque. “I will come with you, ride the bike after you but not enter the mosque.” “O.K., that’s your choice” said Ahmad and they moved.

When they reached the place, Benjamin hesitatingly said, “I want to see what’s going on inside but it’s forbidden in my religion, I can’t do that. I’m Jewish.” “I see” said Ahmad and added, “You don’t have worship or pray or whatever. You may just see and go out again.” A bit hesitantly Benjamin stepped into the mosque seeing the people worshipping in a relaxing tranquility. That was lively, quiet and harmonic inside. It was the first time he saw Muslims praying.He was moved by the scenery. He was looking up to the doom and the mihrab (niche) as well as the scriptures on the wall. He was in a different land. It seemed he found the land he was looking for. He felt the tranquility and happiness inside but said nothing to Ahmad.

Ahmad finished his prayer and they went back. The other day, Benjamin came in and wanted to learn whether Ahmad would go there again. Ahmad eagerly told him he would. Getting the answer he wanted Benjamin became cheerful. They went to the mosque again and the other days they spent a good amount of time in mosques.

The ten days of Egyptian adventure were about to end as every finite being does. Before going back home, Benjamin visited Ahmad once again and asked if he knew anyone in England. Ahmad told him that his brother was an imam in a local masjid (mosque) in Brighton and gave his address. What a good twist of fate that Benjamin’s house was in the same city. As soon as he returned back to Brighton, he just went to the address he had been given. However he couldn’t find anyone but got the telephone number and from the notice board. He called the mosque when he thought it was time for people to go to prayer. The imam responded the call, learnt that the old man had questions about Islam and invited him to the mosque.

He was so enthusiastic that he took the first bus he could. They spoke a lot in the library. He asked many questions and the imam answered. After a couple of hours, imam asked him gently whether he would like to become a Muslim. Benjamin told him that he doesn’t know much about Islam yet and want to see how people live it.

Should you want, you may see what we do and how we live during a week” said he. You can take a seven days seminar if you wish. They were having wudu and prostrating together for a week. Getting informed about general the outline of Islam and related topics such as Qur’an and its features, the life of Prophet Muhammad (PBUH), the position of women in Islam, the importance of family life, war and peace, interest-free economy, honesty etc. Having accepted the principles of Islam, in the first Friday prayer, he enthusiastically uttered the shahadah and reverted to Islam.

When did this event happen? Last summer. Benjamin who adopted the name Muhammad is now seventy eight years old. He recites the Qur’an everyday, and never delays reading the interpretation and commentary of it. He attends prayers regularly and he tells about Islam to those around him.

Unfortunately Muhammad has an illness diagnosed as cancer and his doctor has suggested that he does not to go out more than once a day. He feels sorry since he can’t go to mosque five times a day.

He wants to continue his regular prayers in the mosque, at least he will attend only once. He enjoys spending time together with his Muslim brothers and listening to the lectures after the prayers.

What he wishes from you is only your prayers for him.

We are all old

The elderly’s need for hope

The Remedy to Psychological Issues among the Elderly

Hereafter and Society: Is Ignorance Bliss?