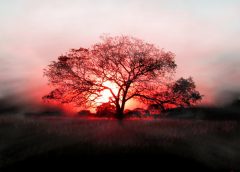 If you observe the universe with wisdom you can regard it as a tree. The realm of witnessing (the time which we live in now) is part of that universe tree. The elements (soil, air, water and fire) constitute the branches, Plants and trees make up the leaves and animals comprise the blossoms of that tree where the human being counts as the fruit of it.

A seed keeps the plan and the program of a tree in itself. So a tree gets shaped based on the plan in its seed just like the way a building gets constructed based on the determined plan.

That law of Allah which is valid for trees is also valid for the great universe tree because this is the requirement of the Hakeem (wise, sage) name, one of Allah’s (SWT) names. As a matter of fact, the universe tree also has a seed just like the trees that are formed out of a seed. That seed is the nur of our prophet (PBUH).

It is wrong to regard this splendid reality as illogical, thinking “How can an immense universe be created from a small entity of a human being?” Because the Glorious and All-Powerful Allah creates the enormous pine tree from a seed which is small as a grain. Is it at all possible that He cannot create the universe from the nur of our Prophet (PBUH)?

Since our Prophet (PBUH) is the seed of the universe tree, there are both physical features of universe tree and spiritual features of realms in that seed as well as samples from thousands of realms. It is again a requirement of his Hakeem name that the universe tree must has a fruit as it has its seed. Because seed exists inside the fruit. It cannot be naked all the time. That fruit is the mankind and the most distinguished one among human fruits is Prophet Muhammad (PBUH).

Since the universe tree’s root and trunk are on the top and its branches are at the bottom, like the Tuba tree, there is a luminous connection from seed to fruit. The nur, which became the seed in the formation of the universe, appeared as the last fruit of the universe wrapping itself with the self of Prophet (PBUH). The self of Prophet Ahmad (PBUH) is the most perfect fruit and all fruits rise in value with him. Because all purposes would be fulfilled through him, the nur of the Gracious Prophet (PBUH) was created in the first place.

Our Prophet (PBUH) is the reason for the creation of the universe. So, we owe him for everything we have. By the words of Muhammad Akif, a famous Turkish poet:

His people and his society are indebted to him

All human kind is indebted to that innocent one

O our lord! Resurrect us with this confession in the Judgment Day.

May Allah (SWT) make us neighbour to his Gracious Beloved, who is the leader of two worlds and the pride of the two realms and means to the happiness in this world and the hereafter, in the heaven and benefit from his intercession.