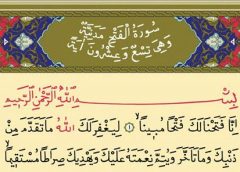 The Quran is the brightest miracle of Prophet Muhammad (pbuh). It is the Sun for Islam and the means of the existence for the Muslims. “The Qur’an is an eternal translation of the great Book of the Universe and the everlasting translator of the “languages” in which the Divine laws of the universe’s creation and operation are “inscribed”; the interpreter of the books of the visible, material world and the World of the Unseen; the discloser of the immaterial treasuries of the Divine Names hidden on Earth and in the heavens; the key to the truths lying beneath the lines of events; the World of the Unseen’s tongue in the visible, material one; the treasury of the All-Merciful One’s favours and the All-Glorified One’s eternal addresses coming from the World of the Unseen beyond the veil of this visible world; the sun of Islam’s spiritual and intellectual worlds, as well as its foundation and plan; the sacred map of the Hereafter’s worlds; the expounder, lucid interpreter, articulate proof, and clear translator of the Divine Essence, Attributes, Names and acts; the educator and trainer of humanity’s world and the water and light of Islam, the true and greatest humanity; and the true wisdom of humanity and the true guide leading them to happiness.[1]

“If humanity and jinn banded together to produce the like of this Qur’an, they would never produce its like, even though they backed one another.”[2]

Quran has thousands of miracles. For instance, it has a miracle with its stylistic purity. There is a wonderful eloquence in the Qur’an’s meanings. It has unique, original styles and its wording is extraordinarily fluent and pure. The Qur’an’s expressions contain a superiority, power, sublimity and magnificence. One of the Qur’an’s miracles is the miraculous predictions by giving information from the past and truly news about future. Although the last three verses of Surat al-Fath (48:27-9)[3] are miraculous in many respects, its aspect of giving news of the future is displayed in some ways.

The first, “God has assuredly confirmed the vision for His Messenger as true (and will certainly fulfil it) in reality”[4], to the end of the verse, gives us the certain news of the conquest of Makka before it happened. It occurred two years later, just as the verse predicted.[5]

The second, at the beginning of the Hudaybiya it is thought that Muslims were lost and had signed the treaty in a defeated condition and the pagans seem to be victorious. On the other hand, “He granted you a near victory before this”[6] stated that in reality this Treaty would be a great victory and the key to further conquests. “With the Treaty of Hudaybiya, Muslims no longer had to resist the attacks of the Makkans with the sword; instead, the brilliant truths of the Qur’an found a peaceful atmosphere to spread, and it conquered minds and hearts. In this truce, the two sides came to know one another. The virtues of Islam and the light of the Qur’an rent apart the veils of obstinacy and tribal fanaticism and proved to be very effective. For example, people like Khalid ibn Walid, a genius of war, and ‘Amr ibn al-‘As, a genius of politics and diplomacy, who could not accept defeat, were defeated by the Qur’an, which manifested itself in the truce. Having willingly submitted in perfect obedience to Islam in Madina, Khalid began to serve Islam and its conquests.”[7] Spread of Islam, the numbers and the power of Muslims jumped in two years in Arabia.

The fourth, “He it is Who has sent His Messenger with the Divine guidance and the Religion of truth that He may make it prevail over all religion foretells with utter certainty that the Religion which the noblest Messenger, peace and blessings be upon him, brought would triumph over all religions. However, at that time, Christianity, Judaism, Zoroastrianism, (and Buddhism) had hundreds of millions

of followers and were the official religions of world-dominant states like Rome, Persia, and China, which had hundreds of millions of subjects. The verse states that the Religion which Muhammad the Arabian, upon him be peace and blessings, a man who was yet unable to conquer even his own small tribe, brought would prevail over all religions and be victorious over all states. And it does so in the clearest and most definite manner. The future proved this prediction to be true, with the light of Islam diffusing from the Pacific Ocean in the east to the Atlantic Ocean in the west.”[10]

The fifth, “Muhammad is the Messenger of God; and those who are in his company are firm and unyielding against the unbelievers, and compassionate among themselves. You see them (constant in the Prayer) bowing down and prostrating.[11] These statements inform us of the prominent virtues and elevated characteristics of the Companions which made them the most virtuous human generation after the Prophets. While in their apparent meaning they express the excellent qualities particular to each class of Companions, they implicitly allude to the order of succession of the four Rightly- Guided Caliphs who would succeed the Prophet, upon him be peace and blessings, and mention each with his particular, distinguishing excellences. These are as follows:

Those who are in his company points to Abu Bakr as-Siddiq, who was distinguished and famous for being the closest friend of the Prophet, and the first to die and join him after his death. Unyielding against the unbelievers implicitly refers to ‘Umar, who in the future would overawe many countries with his conquests, and make the unjust tremble with his justice. With and compassionate among themselves, the Qur’an alludes to ‘Uthman, who, in the future when the ground for a most serious dissension was being prepared, would prefer to be martyred wrongfully while reciting the Qur’an out of his perfect kindness and compassion in order that the blood of Muslims should not be spilt. Finally, You see them (constant in the Prayer) bowing down and prostrating, seeking favour with God and His approval and good pleasure alludes to the conditions in which ‘Ali would find himself in the future. We learn that ‘Ali was perfectly entitled to the caliphate and undertook it heroically, and that he was not responsible for the wars in which he had to be involved during his caliphate in pursuit of God’s good pleasure. It also points

to the fact that ‘Ali, well known for his bowing and prostrations in the Prayer, always preferred perfect asceticism and worship of God.”[12]

Shortly, the Qur’an has ten basic miraculous aspects. Of the many examples of giving clear tidings of the Unseen (past and future) which are contained in the above-mentioned three verses at the end of Surat al-Fath, only some examples have been motioned here.

[3] Surat al-Fath (48) was revealed just after the Treaty of Hudaybiya, which was signed between God’s Messenger and the Makkans in 627, five years after the Messenger’s emigration to Madina.