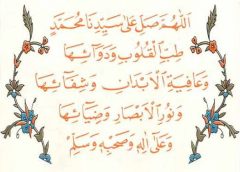 Sending Greetings to our Prophet Muhammad

Narrated by Jabir (RA): ‘’Do not get me such as a water container, which a rider of an animal hangs behind of the animal. Because, the rider of the animal fills up his water container, loads his goods to the animal, then fastens the water container behind the saddle. When thirsty, he drinks water or when necessary he takes ablution, when he does not need water to drink or take ablution, he pours it away (do not remember me like this man remembers that water container). But before, in the middle of and after prayer, remember me by sending the peace and blessings.’’ Almighty Allah says in the Holy Qur’an: Undoubtedly, Allah and His angels send blessings on the Prophet. O believers! You (too) send your blessings upon him and salute him with all respect.

Everybody knows that Prophet Muhammad (PBUH), who is fond of us more than ourselves, has such a high level of compassion for his Ummah. When he was born, his mother and other ladies near Him witnessed that he said: ‘My Ummah! My Ummah!” The Prophet (PBUH) informed us that he will say ‘’My Ummah! My Ummah!” whereas everybody will be saying ‘My soul! My soul! after seeing the Hell in the hereafter.  He also asked the happiness of his Ummah from Allah (SWT), when Prophet (PBUH) was honoured by seeing his Lord at Mi’raj.

Scholars who reached “perfection” as a spiritual state said that the way to reach truths could be achieved by sending many peace and blessings to Prophet Muhammad (PBUH).

They expressed  that  they witnessed  lots of abundances of  the blessings and  they got good results in this world .Even some of them bequeathed their students  to  send   peace and  blessings.

Allah (SWT) sends blessing   upon   His Messenger (PBUH), who is “mercy” to the world with every aspect. That is to say, He appreciates the duty of   the Prophet (PBUH), who protects him, shows mercy to him, upgrades his honour and gives him more of His bounty.  Allah praises   his Prophet (PBUH) among his angels

Prophet Muhammad (PBUH) is both servant and prophet of Allah (SWT).In terms of being servant; he wants mercy from Allah (SWT). This mercy is concerned with the endless need of his Ummah in eternal life. Not only does he deal with the happiness of his Ummah but also he deals with their problems.

Especially he deals with the problems which his Ummah will be exposed to in the eternal world. Although he is shown endless mercy, he wanted a lot of blessings from his Ummah because of the eternal needs of them. All the salutations to him (PBUH) are invitations from the table spread of Maqam Mahmud (the High Station of Praise to which Prophet Muhammad (PBUH) will be raised on the Day of Judgement).

In terms of  his prophethood, he  wants salutation from  us which means  to  renew  our pledge, to surrender his duty , to verify his mission and  to be safe  from  all kinds of evil against his mission.

When should we send salutations on Prophet Muhammad (PBUH)?

These places can be listed as after tashahhud, before and after prayer, at the times of trouble, when the name of the Prophet is mentioned, entering the Masjid, at the time of adhan and iqamah and in funeral prayers. As a consequence, ‘’When one of you pray, he should start with praise and respect. Then he should send salutations to the Prophet and then he should read pray for whatever he wants’’

Hadrat Umar ibn Al Khattab (RA) narrated that: ‘The supplication is stopped between the heaven and the earth and nothing of it ascends, till you invoke blessing on your Prophet.”

Narrated by Jabir (RA):  ‘’Do not get me such as a water container which a rider of an animal hangs behind the animal. Because, the rider of the animal  fills up his  water  container,  loads  his  goods to the animal , then  fastens  the water container  behind  the saddle. When thirsty, he drinks water or when necessary he takes ablution, When he does not need water to drink or take ablution, he pours it away (do not remember me like this man remembers that water container). But before, during and after prayer, remember me by sending the blessings.

In another hadith: ‘’the supplication which is done between two salutations on me (PBUH)   is not refused.”

The Virtues of the Salutation

Prophet Muhammad (PBUH) says: “He who invokes blessings upon me once, Allah showers ten blessings upon him and obliterates (his) ten sins and elevates him by ten ranks’’

“Whosoever asks for peace on me one time, it is as if he has freed a slave.’’

“I know some tribes, whom visit me, with their multitude of salutation on me.’’

Bad Results of Not Sending Blessings

Prophet Muhammad (PBUH) says: “Let his nose be smeared with dust, in whose presence I am mentioned, and he does not invoke blessings upon me’’

“If  people sit in an assembly in which they do not remember Allah (SWT) nor invoke a blessing on their Prophet(PBUH), Allah(SWT) gives them lack and  if  Allah(SWT)  wishes  them  to give  punishment  or  to  forgive.’’

Narrated from Ibn Mas’ud (RA): “There are angels travelling on earth who extend the greetings of my followers to me’’

Narrated from Ibn Umar (RA): “Increase your peace on me every Friday because on that day Angels present them to me.’’

It is mentioned in a hadith: “The Prophet (PBUH) said:” Invoke blessings upon me abundantly on Friday and Friday nights because Angels present your greetings to me day and night. Allah (SWT) has forbidden the earth to consume the bodies of prophets. There is no Muslim that sends blessings to me and one angel does not present it to me and does not tell his name to me. Even the angel says ‘such and such people say like this’

A man whose inside and outside is full of noor (light)  hears and responds to  every blessing, at that time being, sent by his Ummah..

I would like to end with a question: How much blessings should we send to a man who helps and demand for our goodness in every moment of his life and death.

One thought on “Peace and Blessings be Upon Him”