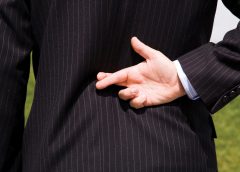 Today the destructive and disruptive effect of lying is damaging family life in an indescribable way. Lying comes across us as one of the worst characteristic in married life as it is in every other aspect of life. Its opposites such as honesty, loyalty, telling the truth are, however, assurances of a happy marriage. One of the main reasons that cause unrest in the family is unfortunately the “lack of confidence between husband and wife.” The first and foremost bad character that causes and feeds the mistrust between a husband and wife is to lie by word or by actions.

When you are married, there is nothing more painful than not to be able to trust a person whom you always live with. “Is he lying again?” “Is he deceiving me again?” “What lie is it this time?” These thoughts in the mind poison the marriage. Continuous doubt and mistrust about a husband or a wife end peace and happiness between them. What is more, Allah forbid, it finishes the marriage. We often hear the following from a husband and wife who have the problem of lying: “First it started with little lies. This opened a door to other wrongs later. I could no more differentiate whether he is telling the truth or lying. I lost my confidence in him and these dishonest behaviours of him made me anxious about the future. How am I going to live a life with a liar? I am really worried.”

I want to share some experimented suggestions as 15 articles which I believe can help solve this social problem:

As a result, to be a credible, reliable husband or wife is only possible by being a righteous and honest person. Seeing that even one lie is enough to shake the trust in the family, couples should rather be honest with one another, speak truly in every condition, and live such a life that they should never need to lie.