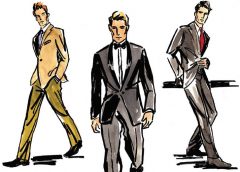 Fashion harms the meaning of tasattur that serves the dignity of human being and prevents many social problems.

The order of tasattur ( covering) of Islam aims at various purposes such as protecting the mental health, dispositional structure and honour of individuals; observing the balance in between species and humans; and making a good life for family befitting human dignity. Man and woman’s being subject to different rulings of tasattur is a differentiation made according to the two kind’s creation qualities.

That is a good answer to the question “Why does human dress up?” The topic we will talk about, however, is “Who dresses up human and for whom human dresses up? Because the beginning of industrialization, which was a milestone for humanity, and the process later on, search for industry-specific markets, industrialization and imperialism and etc, put an end for “the motive of wearing” which had been on the second rank in the list of primary needs of human since our father Adam and our mother Hawwa (May Allah’s peace be upon them).

When the humanity started to question whether “to veil” or “to dress up,” they inevitably adopted the concept of fashion, which appeared before them. While veiling aims at benefit and necessity, fashion only opened doors for us to satisfy our feeling of being unique. The customers of this feeling were primarily women of course. And fashion, first and foremost, started with women’s clothing. Fashion developed a feminine market which directly targets the women. A market with great financial interests with its continuous innovation and dynamism! We can call it “branding”. Because brand is the most important factor in making a product different.

Imam Bediuzzaman Said Nursi says in his Letters, “In this world, the wisdom in artificial clothes is not limited to be protective against heat and cold, adornment, and covering the private parts; but rather to be an index or a list indicating man’s dominance over other species of beings, and his relationship with them, and commandership over them. He might otherwise have been clothed in cheap and easy natural dress. For if it had not been for this wisdom, man would have draped himself in various rags, becoming a laughing-stock in the view of conscious animals and in relation to them; he would have make them laugh.”

Unfortunately, we talk about an industry that has a wide range of effect and interferes in every kind of living species, not only women’s clothing. Because every kind of things from meal to accommodation, automobile to cosmetics, health and even music and holiday resorts  bear the mark of fashion. From furnishing fabric to household goods, jewelleries to perfume, automobile to computer, and songs to novels, everything has a fashion; everything has a different brand. Fashion, which continuously changes with the effect of wars, inventions, philosophy and art, serves the modernism to us on a silver platter with barcodes.

This is a real “market of interests.” Because we desire anything put on market not considering necessity and need, and transgress the boundaries of frugality. We enter through the door of dissipation and amusements, and spend our money wastefully.

This is such a process that leads the veiling, which is a basic and rightful need, to the point of wastefulness, draws us away from contentment and thankfulness due to extravagance, and finally ends in denial and rebellion. Because extravagance results in greed, greed results in haram (illicit things), and haram results in serious spiritual losses.

Ironically, some zealous groups waste for the sake of fashion and brand by relying on– and assuming it a virtue– the hadith “Surely Allah wants to see the work of His blessing on His servant.”

A clothing sector with unreasonable prices has been formed under the name of so called Islamic tasattur. Imposition and setting example of a modern Muslim woman profile that is well-groomed with make-up and wearing brands promoted by social media, advertising sector, some newspapers, magazines and TV shows are the colourful and deceiving sides of the dehumanizing. While human is a commander in the creation with his strong personality, he turns into a slave of fashion and brand.

Our identities are assimilated in the way of becoming monotype industrial beings. Our choices do not represent ourselves, personality, character and belief. We do not even know the meaning of the symbols or writings we carry on our chest printed on our cloths. Just for the sake of fashion and brand it is unfortunately probable that we become billboards of bad words and symbols that are against our Muslim identities.

In order not to fall into this trap of the End Times, we must ask ourselves “Who dresses us? For whom do we dress? Does someone else pay a price for it while we dress?”

“Eat and drink, give charity and dress. But do not become conceited and wasteful.”