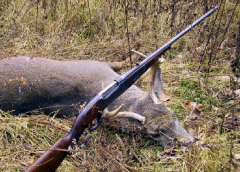 Hunting was a means of livelihood for primitive man. As the civilization advanced, in addition to the pursuit of game for food, man started hunting for sport as well. Various game laws then came into existence for the protection of game animals, birds, and fish. Game laws defined conditions such as hunting seasons, place restrictions, methods of capture, number of animals that may be hunted, etc.

In order to bring hunting in accord with its general belief system, Islam defined conditions that are involved in the act of hunting. The act of hunting mainly involves:

The following is an account of conditions defined by Islam in order to attain legal purification (zakah) of the flesh of hunted game.

(a) The hunter should be a sane Muslim (male or female).    Islamic jurisprudence permits Muslims the consumption of the game hunted by the people of the Book (i.e. Jews, Christians, Zoroastrians, or Sabeans). However, it is reported on the authority of Jabir (R) that Prophet Muhammad (PBUH) forbade Muslims to eat the game caught by a dog belonging to Magians (polytheists). Therefore, the game caught by a hunting dog or hawk belonging to a polytheist, atheist, agnostic, or the like should not be consumed by Muslims.

(b) The hunter should hunt solely for the purpose of food. Hunting for the sake of sport and pleasure is not allowed.

“Whoever kills a sparrow or any larger bird without lawful purpose, Allah will take him to account for its killing.” When the Prophet (PBUH) was asked:’O Messenger of Allah! What is its lawful right?’ He (PBUH) replied, ‘To slaughter it and then eat it, and not cut off its head and then throw it away.'”  (Ahmad)

(c) The hunter should mention the name of Allah (Tasmiyah) and Takbir when sending off the hunting animal or bird, or shooting the gun, or arrow, or hurling the spear, or wielding a sword. The pronouncement of the name of Allah is an essential condition for the lawfulness of the meat killed by hunting.

“….so eat of that which they (your trained hounds) catch for you and mention Allah’s name upon it, and observe your duty to Allah. Lo! Allah is swift to take account.”

(d) The hunter should not be in a state of Ihram. When a Muslim is performing the obligatory pilgrimage (Hajj) or the voluntary pilgrimage (Umrah), he wraps himself in Ihram symbolizing a state of total peace and serenity, the sphere of which extends not only to human beings but also to the animals and birds around him.

“…And, hunting is unlawful to you while you are on the

Allah has forbidden Muslims to hunt on land while they are on pilgrimage.

“O you who believe! Kill no wild game while you are on the

(a)  The game should be of such a nature that man is unable to bring it under control in order to slaughter it properly. The animal or bird on which dhabh (ritual slaughter) can be performed directly is neither allowed to be killed by hunting instruments (gun, captive bolt, arrow, and the like) nor by a hunting animal. Such animals as man is able to bring under his control should be slaughtered according to the standard practices of dhabh.

to eat. Carnivorous animals with canines and birds with claws are usually not fit for consumption, therefore they can’t be hunted for food. However, if these animals and birds are found to be harmful to human life, they can be hunted and killed for public safety.

(c) An animal or bird which is hunted on land with a hunting weapon or overpowered by a hunting animal and which still shows some signs of life, must be slaughtered by the standard dhabh method.

“If you dispatch your dog to catch an animal, mention the name of Allah over it. If the animal is caught, and you reach it while it is still alive, then perform dhabh on it.” (Sahih Bukhari & Muslim)

(d) When the animal or bird is hunted on land with a hunting weapon or a hunting hound and then is found dead by the hunter upon reaching it, the flesh of it can be consumed only under the following three conditions:

(i) When the hunted dead game is not found in water.

“If you shoot an arrow and it kills the animal, you can eat

it. But if it is found in water, you do not know whether its

death was caused by drowning or by your arrow.”

(ii) When the hunted dead game is found with no wounds other than the wound inflicted by the arrow of the hunter.

“If you know that your arrow killed it, and you do not find

any wound inflicted by wild beasts, you may eat it.”

(e) The hunting of all sea animals, provided they live solely in water (and are not poisonous or harmful in any way) is permitted. Their consumption is lawful whether they are caught alive or dead, and whether caught by a Muslim or a non-Muslim.

“To hunt and to eat the fish of the sea is made lawful for you and a provision for the seafarer ….”

“Every sea animal is regarded as slaughtered.”

Hunting instruments are of two kinds:

The hunting weapon should meet the following criteria in order to make the flesh of the game halal for consumption.

“If you hurl the weapon and it pierces the game, eat it, but if it is killed by the blow of its side, do not eat it.”

(ii)       The hunted animal can be slaughtered with any instrument except a tooth or a nail.

“….if the killing tool causes the blood to gush out and if Allah’s name is mentioned, eat of the slaughtered animal. But do not slaughter with a tooth or a nail. I am telling you why: a tooth is a bone, and the nail is the knife of the Ethiopians.”         (Sahih Bukhari)

The trained hunting animal or bird should meet the following criteria in order to make the flesh of the game halal for consumption.

“….Say (all) good things are made lawful for you and those beasts and birds of prey which you have trained as hounds are trained, you teach them that which Allah taught you; so eat of that which they catch for you and mention Allah’s name upon it and observe your duty to Allah. Lo! Allah is swift to take account.”         (Al-Qur’an 5:4)

One thought on “Hunting”