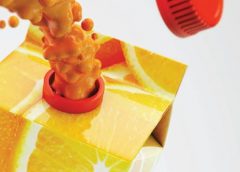 Fruit juice production is quite problematic. It is necessary that every substance used in production process must have a reliable halal certificate.

If you think that supermarket juices are only fruit juice, you are certainly wrong. If they were really only fruit juice, there would be no problem except the danger of alcohol that might be formed in fruit juices. Unfortunately, however, many additives and various substances besides fruits are used in supermarket juices; and this is a grave risk in terms of both our belief and health. As a matter of fact, some market juices have nothing to do with fruits; they can even be produced by using aromas, colorants and flavourings, without any fruits. These additives and the alcohol formation issue will be discussed in this article.

Additives and issues of critical importance

Enzymes are the substances which are used in order to get more juice from the mash fruit (the mixture that the juice and pulp are together), to ensure that the natural colour substance in the mash passes to the water more and to digest the ingredients (organic and inorganic elements such as sratch, protein, polyphenol, proanthocyanidin, pectin, copper, iron, calcium tartrate, potassium bitartarate and the like) that cause blur in the fruit juice.

If there is a najis (unclean) input in the nutrients used in the production process of enzymes, which are usually produced by microbial fermentation, according to Islamic jurisprudence (fiqh); and if that input is not washed, the afterproduct will be unclean. And if that unclean afterproduct is added to fruit juice, that fruit juice will also be unclean. For this reason, enzymes must have a reliable halal certificate.

If a clear fruit juice will be produced (e.g. cherry, pomegranate and apple), gelatine is commonly used in the process of clarification. Because gelatine can purify some blurriness elements that enzyme cannot digest and so can pass through filters. Moreover, gelatine especially fits for the purpose of preventing the bitterness of pomegranate juice.

However, Turkey produces very little amount of its gelatine need; in fact, it mostly imports the gelatine. In the production process of the imported gelatine, the parts of swine and cattle are mixed; and it is brought to Turkey without a source control due to the lack of definition in Turkish Food Codex.

Moreover, even if it is from a halal source like cattle, it cannot be controlled whether the cattle is slaughtered according to Islamic rules due to the lack of definition in the codex again. This situation is also same for the local production of gelatine.

Therefore, there is no reliable gelatine because of the danger that swine skin and bone might be used in production. Even if a halal animal is used in production, it cannot be controlled whether it is halal slaughtering.

There is no production of it in Turkey. It must be examined which animal it is made from and whether the animal is halal slaughtered; that is, it must have halal certificate. Or it must be confirmed that its source is vegetable.

Corn syrup is used to give flavour to the afterproduct. Different enzymes might be used in its production. There is a possibility of those enzymes’ being unclean, which are generally produced by microbial fermentation as mentioned above. It is also possible that the corn might be genetically modified. Corn syrup must be certainly produced from non-GMO corns and have a halal certificate.

The synthetic sweeteners like aspartame and acesulfame-k have carcinogenic effect and put human health in danger. The reason why it is used is that it can give much more sweetness than sugar and corn syrup. 1 kg aspartame can give the same sweetness that 250 kg sugar gives; this shows us how attractive aspartame is to use in production.

Use of aroma is very common in order to compensate the loss caused by the heat treatment applied, or to ensure having a standardized production. Aromas are essential substances and a solvent is certainly required to achieve homogeneous distribution of them. Usually this solvent is ethyl alcohol. It makes the product unclean; and since the afterproduct cannot be washed to remove the uncleanness, an aroma that does not include ethyl alcohol (e.g. propylene glycol) and that has a halal certificate must be used.

It is possible that enzyme and alcohol are used in the production of natural colorants. Since it would not be possible to wash the colorants after the use of ethyl alcohol, the probability exists that they remain unclean according to fiqh.

We have mentioned the dangers of the enzymes above. Artificial colorants might have carcinogenic and allergic effects and pose health risks to us.

Therefore, the use of artificial colorants is insanitary and unhealthy. And the natural colorants must certainly have a reliable halal certificate.

Alcohol (i.e. intoxicant ethyl alcohol) is formed in the product by itself with the fermentation. The outlook of fiqh on this issue is as follows:

The hadith “Whatever intoxicates in large quantities, a little of it is haraam (forbidden),” (Tirmidhi) is misunderstood. “Large quantities” does not mean the alcohol in the product; it refers to the product itself. If it was not so, our Prophet (saw) would not consume vinegar and suggest it; because vinegar, though in very little quantity, includes alcohol too.

Moreover, it is highly probable that the nabeedh (a kind of grape juice), which the Companions (ra) made and consumed a lot, also includes alcohol. They asked our Prophet (saw) about this drink, which is made from dried grape and date, “How long can we drink it?” We see two narrations about this:

2- It is reported that it was to be consumed up to 3 days.

These two practices, which seem opposite to each other, are reasonable when the first one is considered for winters and the second for summers.

However, the fermentation starts in 12 hours in summers and in 3 days in winters; and thus ethyl alcohol forms even if it is just a little. The principle according to fiqh here is as follows:

If it does not intoxicate when consumed in the largest quantity possible, that drink in which alcohol is formed by itself with fermentation is halal.

For instance, beer includes 50 g/l alcohol. Drinking it, even as much as not to be intoxicated, is haraam. Because “whatever intoxicates in large quantities, a little of it is haraam.” But, if we take a fruit juice like vinegar or nabeedh, 10 or 30 litres of them must be drank to be intoxicated considering the 0.1 g/l alcohol they include. Since it is not possible to drink that much, those drinks are halal. Because their large quantities (the maximum quantity that can be drank, that is) do not intoxicate; so a little amount of them is not haraam.

For this reason, the heat treatment is the critical phase during the production process; its control must certainly be done very carefully.

Because of all the risks mentioned above, we must absolutely consume the fruit juices that are controlled by careful auditors and have halal certificate. The others must not be drunk, for they are not reliable.

One thought on “Dangers in Supermarket Juices”