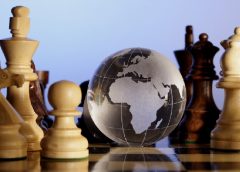 ‘Last Oriantalist’ Bernard Lewis, writes in his book “Mideast”, “Gamma is the most favorite game in the Mideast; chess is the preference of the educated.” and Concluding from the difference among these two games, he puts forward opinions on the life style of the region with the comparison of ‘will-power’ and ‘destiny’. With the codes of Europe-centered perspective of civilization does zionist-minded Lewis see the motherland of the ancient civilizations… In fact, Lewis ascribes gamma to the Middle Eastern nations and chess passing from the East to the West to the ‘civilized’ nations. In other words, they would think; other tribes would throw dice and to the inevitable would they bow!

Huntington commended Zbignew Brzezinski for his book “The Grand Chessboard (1997)” saying “It is a penetrating and hard book explaining the strategic interests of America in the world after the Cold War. It’s a great synthesis of historical, geographical and political analyses.” The author who is the advisor of Obama underlined 15 years ago that the most dangerous scenario for Eurasia would be the alliance of Russia, Iran and China. In a conference in Washington did he point that whatever decision Turkey and Saudi Arabia would make for Syria must be abided by.  In other words, he expressed his will-power to put the vizier and rook of his own side forward against the ones of Eurasia. Of course to be the permanent king!

As Mario Mazzanti from Toskana wrote on the thriller novel “Checkmate” a policeman and serial killer played the chess in, “The game being played in the Mideast is more fearful than a hopeless chess in which each move results in death of a person! Miserable geography where death of a hundred, thousand, ten thousand people become more usual in every move! Abundant and suffering country in which every move results in deaths or the moves are provided with deaths!

Osman Atalay, rightfully, cries about Syria. He charges the grass-root of AK (Justice and Development Party) Party with the fact that they have not supported the Islamist NGOs, authors, the Prime Minister and Minister for Foreign Affairs! The chess masters of the Mideast determine strategy to stand in Turkey’s moves over the public opinion with their lobbies. Although fifteen thousand people were killed just near us, in Turkey did a leaf not stir! The accounts of the aid campaigns are blank! The meetings don’t appeal to the people! Arenas overflow with a hundred of thousand people. On the other hand, there aren’t even a thousand people crying out to make the clash in Syria stop! Why and How? In the negotiation we carried out on Syria on the social media a few days ago, Dr. Kerem Kınık from Doctors Worldwide cried so: “I’m human; I see people being killed. This regime has been founded on oppression and it is a must to topple down it.” and added: “Instead of seeing the oppression simply, they are making political analyses; investigating the plots of anti-Islamists and don’t recognize Syria.”

The pro-plot mindset Mr.Kınık mentioned about is such a clinical case that they purposefully accept to be the pawn of dirty chess being played by killing the innocent. A group made us question whether we could go out from the hall alive and well in some of the meetings over Syria having been organized in different provinces of the Anatolia in the previous months and the sickly so-called ‘Islamist’ mindset tried to teach a lesson on Syria for the Minister for Foreign Affairs and set Iraq an example for the situation in Syria in another meeting. These are the same paws. Do the principles come to the mind of this pro-plot mindset setting all their strategies over whether to be a pawn or not?  Even if rivers run in blood, ‘justice’ doesn’t come to the neighborhood of this group! They live by looking for an answer to the question “Who is whose footman, pawn?  As even the countries infamous for their cruelty express Bosnia-Syria comparisons explicitly, what a misery for a Muslim to be indifferent and give in to cruelty is!

In the Globalizing ‘Eastern Mediterranean Chess’ is Turkey no doubt one of the most important mans. The countries moving again and again to be the shah of the region aim to affect the people, firstly the Turkish, of the region and prepare a platform for their strategies.

Then, “Who will win this game?” “Does Russia give up the region?” “What will happen to the Syrians, the miserable victims of the global game?” We will analyze the book “Doğu Akdeniz’de Küresel Satranç (Global Chess in the Eastern Mediterranean )(Truva) by  Dursun Yıldız and Prof. Dr. Doğan Yaşar and “Satranç” (Chess) (Can) questioning the roots of European Fascism by Stefan Zewig which look for answers to these questions until next week. Who knows how many people will be killed for nothing under the palets of this dirty and global chess! May Allah prevent us from having a penchant for oppression!