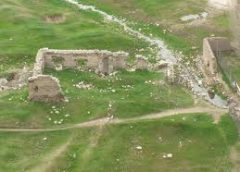 One day, he read a statement of the British Minister of Colonies, Gladstone, in the newspaper which read: “So long as the Muslims have the Qur’an, we shall be unable to dominate them. We must either take it from them, or alienate them from it.” Thereupon, Bediuzzaman clearly understood the dangerous plans that the Islamic World was faced with and said “I shall prove and demonstrate to the world that the Qur’an is a never-fading, inextinguishable Sun!”

Thus he determined the direction he would follow to serve in the cause of Islam. He thought that the best way to combat these plans was to educate Muslims both intellectually and scientifically so that they would uplift their beliefs and surpass the West in both ways.

In the meantime, while teaching in his masrasah in Van, he developed his ideas on educational reform and formed his own particular method of teaching. He developed this idea through examining all the sciences he had studied alongside with his experience of teaching religious and scientific subjects as well as considering the needs of the times. His new method was to combine the religious sciences with modern sciences. As a result the positive sciences would strengthen the truths of religion.

In this regard, one of Bediuzzaman’s greatest aims was to establish a university that he called Madrasat’uz Zahra, where students would be taught in both fields: Positive and religious sciences. The reason behind this project was that he saw that in secular schools, only modern sciences were taught, while in madaris of the east only religious sciences were taught. So the former was in danger of being without religion and the latter had to be protected from bigotry. Ustad Bediuzzaman says these truthful lines in this matter: “The religious sciences are the light of the conscience, and the modern sciences are the light of the reason. The truth is manifested through the combining of them. The students’ endeavor will improve with these two wings. When they are separated it gives rise to bigotry in the first one, and wiles and skepticism in the other.”

Through Madrasat’uz Zahra Bediuzzaman aimed at reconciling the three main branches of the educational system of that time, which was composed of the madaris or traditional religious schools, where students were taught too many detailed theoretical and instrumental learning; new secular schools, where students were taught modern science with no reference to religion; and the tekkes or dervish lodges, which focused on spirituality but neglected the first two.

Another aim that Bediuzzaman followed with this university was to establish the unity of Islam. Madrasat’uz Zahra was going to serve as a central university in Asia receiving students from India, Caucasia, Turkistan and even from Saudi Arabia namely from all the Islamic Countries. That would lead to unity and solidarity between Muslims world over.

In pursuit of attracting the attentions to the East, which was then a bit neglected and proposing his project to authorities and other scholars, he went to Istanbul in 1907 and posted a notice on the door of his residence in Fatih, “Here all difficulties are solved, all questions are answered, but no questions are asked.” This was not meant to show off with his personal knowledge but to show the value of the Islamic sciences taught at Eastern Provinces and to have an opportunity to share his projects with the knowledgeable people and scholars in Istanbul.

There he received many senior scholars, who heard about him inviting everyone to ask any question. Thus, many scholars visited and asked their most difficult questions to him. For instance, once, Hasan Fehmi Basoglu, later a member of the Consultative Committee of the Department of Religious Affairs, who was considered to be one of the prominent members of madaris, heard about him receiving so much praise. Then he decided to visit him. That night, he selected the most profound books and compiled the most abstruse matters from them, then put them into question form. The following day, he went to his residence, asked him the questions and the answers he received was amazing and extraordinary. He thought that it was as if they had studied those matters that night together and now he was answering them as exactly as they were.

There, he answered the questions of the people as well as of the scholars visiting him in groups. Being so young, answering all the questions convincingly and impressively, his manners and attitude attracted the learned men and the people. Quickly, he became famous among the scholars of Istanbul. His application to meet with the Sultan was accepted, however, he was sent to a court martial as a result of the harsh talk he had with the Sultan. He had voiced his concerns and criticisms against the Sultan himself with no fear, but it resulted in his project’s refusal by the Sultan.

Later, he was able to receive support from the next Ottoman Sultan and started to lay the foundations of the Madrasat’uz Zahra in Van. However, the First World War broke out and it led to the halt of the construction which could never be resumed. Many times in his life he was very close to accomplishing his aim of founding this university, but he faced a hurdle every time.

Later in his life, Bediuzzaman wrote a total of 130 treatises which comprised the Risale-i Nur Collection. We can say that Bediuzzaman realized, writing those treatises, what he wanted to achieve in Madrasat’uz Zahra. For it has blended the mind and heart, proved the faith-related issues with logical and strong evidences and also put enough emphasis on Ma’rifatullah and Muhabbatullah issues.

Bediuzzaman makes the following statement in Risale-i Nur Collection: “Almighty Allah, the most Merciful of the Merciful has established the spiritual identity of that madrasah in the province of Isparta and bestowed the Risale-i Nur upon us. InshaAllah, in the future, Risale-i Nur students will be able to establish the concrete form of that lofty reality.”