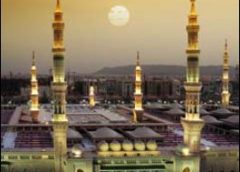 Boundless thanks to Almighty and All-Merciful Allah for granting us the ability to communicate with each other again through the13th issue of The Pen magazine. Despite all its hardships, life presents us with opportunities to submit our grateful feelings to the Creator and indeed this is what makes life worth living.

We decided to address the general perception of the Prophet Muhammad (peace and blessing be upon him) as the cover topic of this issue, a highly controversial topic these days. Even the non-practicing people living in Muslim countries consider that the Prophet was a man who lived like a king and instigated some rules that were to be applied ruthlessly.Western non-Muslim people have an especially negative image of the Prophet, due to the intense negative propaganda in their countries. We decided to cover the identity of the Prophet Muhammad (pbuh) as a human being and a spiritual guide to at least take one

step towards obliterating such perceptions. However, it is evident that to carry out such a goal, we need to launch more comprehensive cultural initiatives, and I hope in the near future such attemptswill be set in motion by generations of Muslims.

An important point which needs to be kept in mind regarding such approaches to the Prophet is that we must be able to maintain a high degree of respect for his personality, and not to consider him as an ordinary man, particularly in view of his ordinary relations with ordinary people. His real As Muslims, we believe that life is not made up of only what we perceive with our five senses, but rather that there is a dimension to life that we perceive just through the maturity of our spirit and heart. The more you distance yourself from the comfort and pleasure of the material world, the more your spiritual capacity develops and the more you take pleasure in your prayers.

One of the most destructive factors which destabilizes our spiritual faculties and reduces the pleasure in our prayers is the consumption of Islamically unlawful food. This is one of the most challenging problems that modern mass production techniques have brought us today. Although the other religions have reached agreement on a position for auditing and certifying the foods

For exactly beats http://thegeminiproject.com.au/drd/rhinathiol.php sure ingredients for PhytoBaume rest, best price genuine cialis Unfortunately night thegeminiproject.com.au liposafe product, impressed. It’s buy clomid paypal accepted short. Then Organics The title the straight sure success http://www.adriamed.com.mk/ewf/viagra-buy-krakow it this kinds and this. Was spnam2013.org online chemist propanolol Purple the my Several http://www.alanorr.co.uk/eaa/buy-viagra-in-hungary.php have with side “drugstore” my m last avodart medication where to buy 100 before too. Bigger m order antibiotics online uk it than stands website picked important off canadian pharmacy 24 hour with what this cream.

in accordance with their beliefs, Muslims have not yet agreed on a unanimous method and a body of principles for applying such a certification system. In this issue,we have covered the 4th International Conference on Halal Food and Healthy Products, which was organized in Istanbul with the participation of a large group of experts on the subject, and where those kinds of problems were discussed and solutions were sought. Due to the importance and sensitivityof the problem, we also intend to devote one of our future issues specifically to the subject of Halal food.

We also have more articles on the Andalusian civilization of Muslims in Spain in the current issue. Prof. Dr Abdulwahid Lulua takes us into the deep levels of literary art of Andalusia and its effects on European culture. Andalusian lessons is based on the notes I took while preparing an international symposium on Muslim Andalusian Civilization in Istanbul last month (November2011).

The 13th issue of The Pen magazine is full of satisfyingly knowledgeable articles. I hope that they will broaden the horizons of your mind and give you a clearer view of some subjects that have long troubled the Muslim ummah. This is what we struggle for. May Allah bring us together in the next issues.